It's human life they are playing with. That dummy in the test could well be you.

Over the course of the last two years, Global NCAP (New Car Assessment Programme) has become a dreaded word for every car manufacturer in the country.

Global NCAP, a UK-based independent body that conducts crash safety tests on cars across the world, first came to limelight in India on the eve of the biennial Delhi motor show in January 2014. All five cars - Tata Nano, Maruti Alto 800, Hyundai i10, Ford Figo and Volkswagen Polo, fared miserably in the crash test and scored a zero.

Ten months later, disaster struck again. This time Datsun Go and Maruti Swift could not muster pass marks. Having been embarrassed twice, one would have thought the industry would sober up and stop making sub-standard cars in India. You cannot have been more wrong. 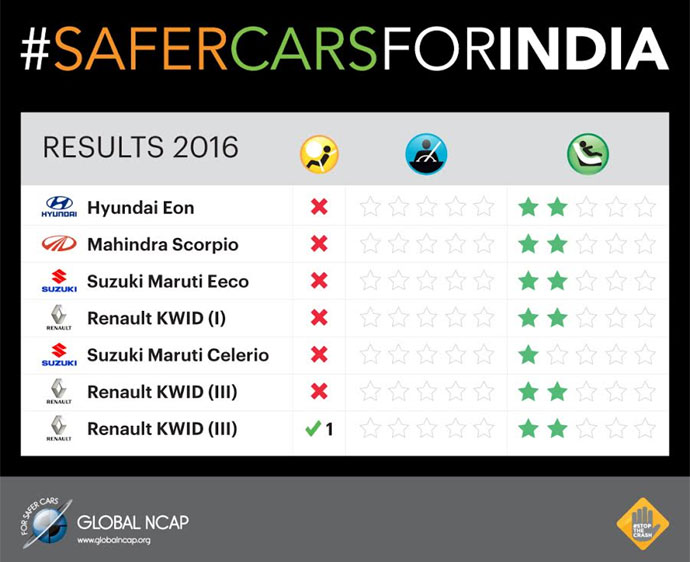 On April 17, Global NCAP released findings of their latest crash test results where five cars - Hyundai Eon, Mahindra Scorpio, Maruti Eeco, Renault Kwid and Maruti Celerio - were sent to the gallows. All of them scored a zero and matched the dismal performance of their counterparts in the past. Companies may squabble and call each other names in various other things, but in their inability to learn from past mistakes, they are all the same.

Here is why we should be bothered:

India has the most unsafe roads

It is something that is well known by now but there is no harm in repeating. Indian roads are the most dangerous in the world and 1,40,000 people die due to road accidents every year. Yet, road safety measures, in general, and for vehicles, in particular, have lagged global standards.

The government has come up with a blueprint for crash tests in India that will require all fresh launches to be fitted with dual airbags from October 2017, while new cars of existing brands would have to comply to it from October 2019. But it is probably not soon enough. And the manufacturers, with a few exceptions, are leaving it till the end.

The same companies blame the government and rival industry lobbies when a knee-jerk decision is taken to curb pollution or bring in a better quality fuel regime, but when a good enough buffer is given to improve the safety of the cars, they take their own sweet time.

Airbags and ABS save lives

There is absolutely no doubt about this fact even though there is a whsiper campaign against it. Some Japanese and Indian car makers (no need to name them, you know who) say Global NCAP is a quasi-front of the European automobile lobby to push sales of airbags and ABS (Anti-lock Braking System). There may or may not be any truth in this but that does not take anything away from the efficacy of the two features.

In the three Global NCAP crash tests, all the cars selected were base variants, which in India means no airbags or ABS. All of them scored zero. According to a study done by Robert Bosch Accident Research Project in 2014, if ABS and airbags are made mandatory for cars, casualties are estimated to come down by 35 per cent. If they were offered on motorcycles and scooters, the impact on respective fatalities would also be similar, but that is a different story altogether.

Most manufacturers including Maruti Suzuki, Hyundai Motor, Tata, Mahindra and Honda have forever shied away from fitting their cars with these features citing cost and a lack of awareness among consumers regarding the importance of these features.

"In Japan, airbags were made standard on all cars in 2004 but the rate of accidents was still very high," said R C Bhargava, chairman, Maruti Suzuki India in December 2014. "If the government decides to make them (airbags, ABS) mandatory, then we will comply but it would make cars more expensive. My worry is, for entry-level cars it could have a significant impact. We want two wheeler owners to graduate to cars as automatically that is a step up on safety. If you make cars expensive, then that will not happen."

Mr Bhargava is a very articulate man who puts forth his views forcefully with much conviction. But it is not a worthy argument. Just a look at the price of two airbags ten years ago and now, and it proves how the industry has deliberately overpriced them for their own benefit.

In 2005, a top-of-the-line variant would cost you Rs 1 lakh more with airbags. Today, that difference has come down to less than Rs 25,000. Next year, when every car would have an airbag, economies of scale would bring down the cost even more. Price never had anything to do with why companies did not offer safety features.

This is another stupid argument being put forth. Companies point at the headline-grabbing accidents featuring a Mercedes, Audi or BMW to say that safer cars encourage rash driving and leads to higher casualty on the road. In effect, if your car is unsafe, you will drive cautiously and more responsibly.

Nobody has done a study on this side of human psychology and I am no judge, but do you really think any of the car companies are actually concerned about the safety of fellow road users and pedestrians?

If that were the case, every car would, by now, have a pedestrian airbag (one that pops open on the bonnet, in case the car hits a person in front). And how fantastically stupid is it to say, "I know you are a rash driver, so here is a car for you that is dangerous by design just so that you dont hurt others."

Ironically, this argument was also used by Bajaj Auto managing director Rajiv Bajaj, a self-professed anti-car personality in the industry, while defending his quadricycle Qute when it was panned by Global NCAP. He said that since his vehicle cannot travel at three-digit speeds, it is liable to cause less damage to its occupants and others around.

Wow! Why not ban all mechanised transport then and go back to riding around in bicycles?

After the first round of NCAP crash tests that featured the Polo small car, Volkswagen decided to "proactively" offer airbags as a standard feature across all its cars. Althought it wasn't "proactive" but you cannot criticise them for doing the right thing.

Later, Toyota also decided to follow suit, and today, all of their cars have these features as standard offerings. As mentioned above, others continue to drag their feet.

Tragically, there are many cases where cars made for export in India have significantly different and much better safety credentials than those being sold in the domestic market.

The explanation that cars for India conform to Indian laws (that are lax) and those for other countries comply with laws of those countries contradicts their own claim that a Hyundai or Honda in India is the same as one in Europe, US, Australia or Africa. It is an open secret which nobody talks about as there are skeletons in everybody's cupboard.

But it's human life they are playing with. Next time when you buy a car, do check how many stars it has scored. That dummy in the crash tests could well be you.

#Maruti-Suzuki, #Renault Kwid, #Cars, #Automobiles
The views and opinions expressed in this article are those of the authors and do not necessarily reflect the official policy or position of DailyO.in or the India Today Group. The writers are solely responsible for any claims arising out of the contents of this article.

Having spent over a decade reporting on cars and bikes, the smell of engine oil, burnt tyres and the road not taken is what keeps me going.