Mosquito Not? Have scientists created a venomous GM fungus that can kill 99% malaria mosquitoes, but without harming us?

Scientists develop a genetically-modified fungus that wipes out malaria vector mosquitoes with 99% efficiency. But what could be its other effects?

This fungus is genetically modified so that it can kill mosquitoes — as part of a new drive to fight malaria.

Researchers at the University of Maryland in the US and the IRSS research institute in Burkina Faso in Africa took a naturally occurring fungus — Metarhizium pingshaense — and combined it with the DNA of a venomous Australian Blue Mountains funnel-web spider.

While the fungus does kill mosquitoes in its unaltered state, when combined with the new spider genes (the transgenic form of Metarhizium pingshaense), it becomes far more deadly and fast-acting. “It is a really exciting study and it looks like this has great potential to become another tool in the interventions toolbox,” Dr David Weetman, senior lecturer at the Liverpool School of Tropical Medicine, told The Telegraph.

The trial was conducted in a sealed model village in Burkina Faso. In a 6,500-sq-foot fake village — complete with plants, huts, water sources and food for the mosquitoes — it was found that the genetically modified fungus killed more than 99% of 1,500 mosquitoes in the 45-day trial run.

The scientists used an oil emulsion to attach the fungus spores to a black cotton sheet, which they hung in a chamber. Dubbed the ‘Mosquito Sphere’, the ‘village’ was surrounded by a double layer of mosquito netting. The specific objective was to naturally infect the Anopheles mosquitoes that spread malaria. Just as the spider injects venom in the insects, the fungus reportedly works the same way.

“When this fungus detects that it is on a mosquito it penetrates the mosquito’s cuticle and enters the insect. No transgenic malaria control has come this far down the road towards actual field testing. This paper marks a big step and sets a precedent for this and other transgenic methods to move forward,” Lovett claims. Weetman agrees. “It is a big step forward that they have studied the fungus in a realistic environment and shown that it can effectively destroy a mosquito population, by killing them but also depressing the ability of the female mosquito to reproduce,” he said.

However, the research is fraught with a set of grave concerns.

Foremost, we have no clue about the safety of other life forms — including humans — from the fungus.

Dr Weetman agrees. “The team needs to confirm the safety of the modified fungus for livestock and humans in future trials,” he avers. Researchers are yet to ascertain the same. 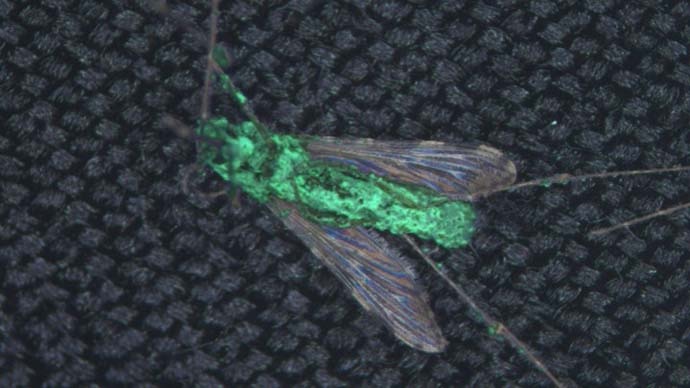 Secondly, even if pronounced safe for larger lifeforms such as humans and livestock, what about the safety of other insects and smaller life forms? Addressing the same, Raymond St. Leger, a professor of entomology at UMD and co-author of the study, said that the concern has been addressed.

“These fungi are very selective. They know where they are from chemical signals and the shapes of features on an insect's body. The strain we are working with likes mosquitoes. It won't go to that trouble for other insects, so it's quite safe for beneficial species such as honeybees,” he said.

Thirdly, what about the spread of the fungus? Considering that it is a microorganism, how do scientists intend controlling its spread? While the report claims that the fungi spores are large, sticky and sensitive to ultra-violet light and would not naturally become airborne and spread, what about spreading through water or contact? The report does not address this.

Fourthly, why is Africa being used as a testing ground, as opposed to any other developing/developed part of the world that could afford damage control in case the research goes wrong? “Fighting malaria through genetic engineering is dangerous. I'm heavily worried that Africans are the preferred guinea pigs for experimentation, and Africa is going to become a large laboratory for risky experimentation,” Nnimmo Bassey of the Health of Mother Earth Foundation, an advocacy group based in Nigeria, told NPR.

It is an established fact that nearly 4,35,000 people die from malaria each year globally and the battle against the disease is stalling as the malaria-carrying mosquitoes are getting increasingly resistant to insecticides and the Plasmodium (the parasites in mosquitos that cause malaria) are getting resistant to drugs — making cure more and more unviable.

However, in deploying preventive measures that play around with the very genetic composition of naturally-occurring organisms, one can only hope that science won't create a Frankenstein's monster.

Also read:  What India can learn from a malaria-free Sri Lanka

Post your comment
#Burkina faso, #Africa, #Health concerns, #Malaria eradication
The views and opinions expressed in this article are those of the authors and do not necessarily reflect the official policy or position of DailyO.in or the India Today Group. The writers are solely responsible for any claims arising out of the contents of this article.