The Hitchhiker's guide to the Samsung Galaxy: How the smartphone line-up has evolved over the years

From the Galaxy S to the Note 9. Exploring the evolution of Samsung's Galaxy phones.

On February 20, 2019, South Korean tech giant, Samsung, is expected to launch its first flagship of 2019 at its annual Unpacked event – which for the first time in years is not going to be held in sunny Barcelona. Instead, the event has been scheduled to take place at the Bill Graham Civic Auditorium in San Francisco, California.

The change in venue, though, appears not to be a move taken to simply give the scribes and Samsung fanboys a change of scenery. Rather, it appears to be an attempt to differentiate Unpacked 2019 from every Unpacked event in the past.

And the reason behind it could be what Unpacked 2019 holds and what Samsung wants it to stand for. In 2019, Samsung is celebrating the 10th anniversary of its Galaxy line-up of devices. (Photo: Reuters)

In 2019, Samsung is celebrating the 10th anniversary of its Galaxy line-up of devices and as such, is looking to make some major announcements  – the first of which is widely tipped to be the Galaxy S10.

The company is looking to rip up the drawing board and carry out a radical redesign of the line-up in an attempt to help it move into the future of smartphones. A future that could soon see flexible display phones with multi-camera setups and path-breaking, futuristic tech.

One where the next Galaxy device, the S10, could come with as many as five cameras at the back, 4K selfie shooter at the front, truly edge-to-edge displays and reverse charging technology.

But before we give these silken dreams a second thought, it'll be prudent to look back in the rear-view mirror and see the devices that got us here. Devices, that were not always perfect, and at times even disappointing. Yet, each important in their own right as they helped Samsung setup a foundation which is now enabling the smartphone maker to take the next step forward, and bring to us the future today. 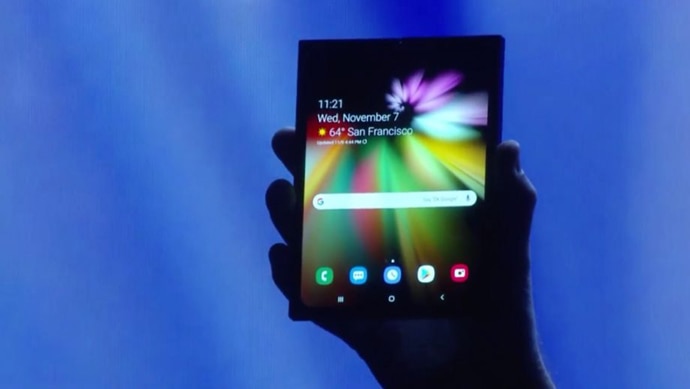 The future of the Galaxy line-up could include flexible display phones. (Photo: Screengrab)

Hitchhiker's guide to the Galaxy

Although Samsung technically launched its first smartphone back in 2001, its first device under the Galaxy branding – the Samsung Galaxy – was only announced in April 2009. The smartphone – which went on sale in June later that year – was also the first to use the Android operating system from Samsung.

However, as is often the case with firsts, the Samsung Galaxy, didn't turn out to be quite what Samsung had expected.

The nostalgia aside, with its tiny 3.2-inch OLED capacitive display and four physical buttons enclosing a clunky D-Pad and an OK button in the middle, the very first Samsung Galaxy smartphone – despite bringing with it an industry-leading 5-Megapixel camera and an overall pleasant design – lost out to other Android offerings from HTC and Motorola. In fact, Tech Radar – one of the first publications to have reviewed the device – went as far ahead to call it a "run of the mill Android effort".

But Samsung didn't give up, and in 2010 it came back with the first Galaxy S series device. In true Samsung fashion, it packed the device with best-in-class technology – including a powerful GPU – and even slapped on a much bigger 4-inch Super, AMOLED display all without inflating the price tag too much.

2011 was all about what Samsung has done so very well over the years – ironing out the chinks in an attempt to perfect the near-perfect device.

The Galaxy S2 launched in that year, brought with it best-in-class internals, but what it truly got right was the design. The smartphone was one of the sleekest around at the time – 8.49mm. But crucially, the glass and plastic design stayed, making it as a defining feature of the Samsung Galaxy DNA.

Later in the year, Samsung made another addition to the Galaxy range of devices – the Galaxy Note. Announced in October 2011, the device with its stylus and a massive screen was not only very different from the SII but was also nothing like the other Android smartphones in the market. The device single-handedly re-wrote the rules of engagement of the industry by truly ushering in a new era of phablets.

The device was such a runaway success that the company sold over 50 million Galaxy Note devices between September 2011 and October 2013. 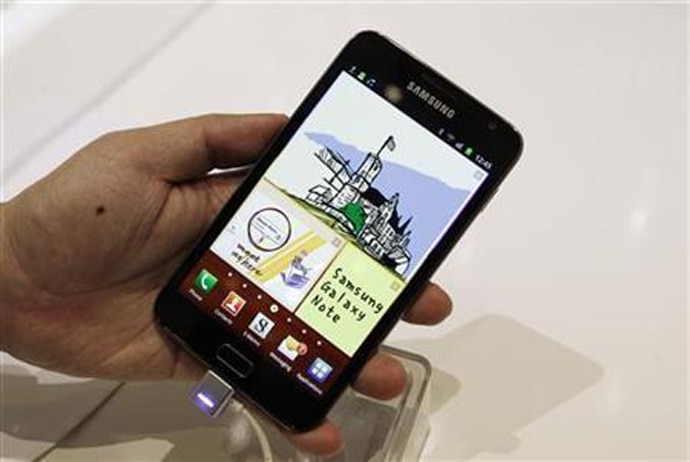 By 2012, Samsung had enough momentum to go for the kill, and it did so, with the Samsung Galaxy S3. Apart from your usual high-end specs and an HD Super AMOLED panel that was quite revolutionary for the time. Talking about the good old days of the S3, the phone also featured a massive 2100mAh battery which won Samsung many admirers.

Another important thing to note about the S3 is that this was arguably the first Samsung phone that was viewed as a true premium iPhone competitor. And much of this was down to the design tweaks that Samsung had implemented.

Despite still using polycarbonate as the building block for the phone, Samsung's use of slightly curved edges and a UI that it claimed was inspired by nature truly set the device apart from whatever else existed in the market.

This was a relatively modest year for Samsung, where despite the growing sales, in terms of hardware, the Galaxy Note 3 and the Galaxy S4 did not set the industry on fire – despite the inclusion of a 1080p display on the latter. The year was more about building on the successes of previous devices.

The next year was slightly less memorable for Samsung. Despite bringing water-proofing to its phones, the redesigned Galaxy S5 with its plastic and rubber port protectors received a lot of flak.

However, the conversation changed by 2015 when the Galaxy S6 was announced at the Unpacked event in Barcelona. The device had a metal frame and used glass to give it a much-required premium look and feel. We also saw the introduction of the Galaxy S6 edge with curves on both sides of the phone helping the device stand apart from the competition. The Galaxy S6 edge with its beautiful curves. (Photo: Reuters)

By now Samsung was creating truly premium handsets which impressed at first sight. In 2016, Samsung took this up a notch higher by tweaking the new metal glass design and introducing new features to the UI.

However, the year ended on a bad note for Samsung as it faced quite a few issues with the Note 7 – yes Samsung skipped on the Note 6 name altogether to streamline the naming of the devices. The situation was so bad with the Galaxy Note 8  – and its battery fires and explosions – that the phablet had to be recalled twice setting back the smartphone maker by at least $5 billion.

2017 was the year of redemption for Samsung as the phone maker tried to regain the lost trust of the buyers because of last year's Note 7 fiasco. As a result, we saw more refined designs and much-improved software on both the S8 and Note 8. 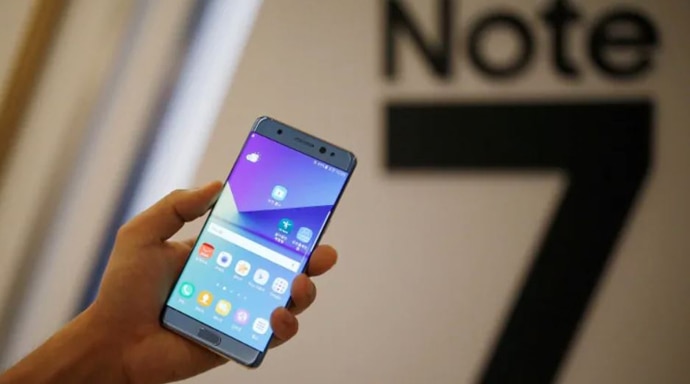 However, the level of refinement that went into the S8 made it one of the best smartphones to have been created to date.

Its curved display flowed from one edge to the next, and to its credit, the phone featured very little bezel too. But the design wasn't the only thing great about the S8. Apart from being Samsung's most gorgeous creation till then, it also had great specs. Despite calls for a redesign to the flagship phones, Samsung resisted the temptation, and in 2018, introduced S9 which focused heavily on the cameras. As for the Note series, the company brought the Note 9 with a bigger battery and other improved specs.

But the Galaxy series truly evolved in 2018 in the sense that it transitioned from just being a flagship centric line-up to rather a more inclusive one, which featured phones for all budgets. From the Galaxy A6 to the A8 Plus, Samsung had a beautiful, infinity-display clad Galaxy phone for pretty much everyone – a trend it's looking to carry forward with the M10 and M20 phones in 2019.

Post your comment
#10 years of samsung galaxy, #Smartphone, #S10, #S9
The views and opinions expressed in this article are those of the authors and do not necessarily reflect the official policy or position of DailyO.in or the India Today Group. The writers are solely responsible for any claims arising out of the contents of this article.