The first week of every new year is an important part of India’s science calendar. The year for Indian science begins with an annual session of the Indian Science Congress — a mega exposition of science and technology. Often it is called a ritual or even a mela, but there is no denying that it is a unique event and the largest of its kind.

The Science Congress brings on one platform policymakers, top science bureaucrats, leading scientists including Nobel laureates, university teachers, and a host of students from different streams of science as well as school children. Traditionally, the Congress is inaugurated by the Prime Minister every year. There is no other event of this nature and scale. Science Congress is truly all-encompassing. It needs to be preserved and nurtured. Any attempts to dilute the importance of science congress should be rebuffed.

At the same time, there is a need to reform the Science Congress. Over the years, it has become too unwieldy and sometimes even lacks seriousness in the conduct of business. In its current format, a series of plenary talks are organised. These are delivered by leading scientists and policymakers. In parallel, sessions in over a dozen scientific disciplines are held where scientists — mostly from universities and science colleges — present papers. 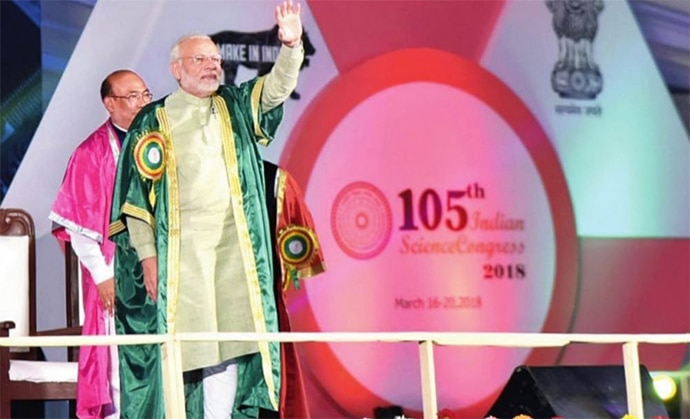 There is a need to reform the Science Congress. (Photo: PTI)

It is this format of the Congress that needs to be reformed, to make it more meaningful and serious. The expo which highlights achievements of agencies like Indian Space Research Organisation and Defence Research and Development Organisation also attract large crowds, mostly young people. While plenary talks and discussions are well-designed and well-attended, the sectoral sessions are generally of poor quality and hardly attract any audiences. There is no reason why a paper presented in a sectoral session of the Congress should not have the same quality as any other scientific meeting.

It is critical to encourage teachers and students from science colleges across the country to talk about their work, but quality should not be compromised.

The Science Congress could also be used by policymakers and science bureaucracy to come face to face with present and future scientific workers. They should hold open houses on focused issues such as funding of research, scholarship opportunities, training and employment schemes, innovation incubator promotion, problems of women scientists etc and listen to young and aspiring scientists on problems they face in teaching and research.

It is critical to engage every section of the scientific talent pool and not remain restricted to top rungs. This way we will be able to nurture new talent and enlarge the pool. A lot of young people including school and college students feel inspired by listening to top scientists and their achievements, but are left confused on how to fulfil their dreams. Science Congress should develop mechanisms for engaging with such people, perhaps through information kiosks, counselling sessions and so on.

The Indian Science Congress was designed to be a bridge between science and society. Hopefully, new ideas and new energy will be injected at its session being held in Jalandhar this week to make it the flagship event of science in India once again.

#Policymakers, #Narendra Modi, #Science Congress
The views and opinions expressed in this article are those of the authors and do not necessarily reflect the official policy or position of DailyO.in or the India Today Group. The writers are solely responsible for any claims arising out of the contents of this article.