We went around the entire school shouting slogans of “Yahya Khan, Murdabad!” and finally went back to the graveyard to burn the effigy.

In the late 1970s, as Cadets in National Defence Academy, Khadakwasla, we always compared ourselves with instructors by their ribbons. No nine years medal meant an equal. We were all on equal footing as far as the battle of experience was concerned. On commissioning, I was somewhat sad that I was posted to Chandimandir whereas my course mates were mostly posted to units on the borders. Within a month or two, the unit went to Drass – the coldest inhabited place in the world, and I was thrilled. Then on, I never looked back.

I, like most faujis, faced many Pakistanis, killed many terrorists and did all the thrilling things being a military intelligence officer. Today, after retirement, when I recount my lifetime of actions, the biggest thrill I get is when I narrate this real story of my childhood.

Although seeing tanks moving on the streets of Ahmednagar was a novelty to us as kids, it was also a routine sight. We would all gather at the gate of our house and shout "Jai Hind" to gain the attention of soldiers on those tanks. Somewhere towards the end of 1970 or the beginning of 1971, one fine morning we saw a large number of tanks moving. The next day and the day after too, we saw the tanks moving. We did our regular smart saluting, shouting "Jai Hind" and waving at every single tank. We were happy to collect the tar scratched out from the tank movement on that road to make Rani Kanche. Today, I know, the road was Ahmednagar Cantt to Nagar-Road Railway Station where sidings existed for loading them on to the railway. It was the mobilisation of tank units. My father being in state government service got posted to Latur within a few months and we moved on. The thrill of seeing tanks and waving at them was over. But then Latur was a town of all real actions. I joined Shri Marwadi Rajasthan High School which was walking distance from my house. It was teachers of that school who competed amongst themselves to teach students something more than the routine topics.

One of the evenings when I went to play in the school grounds, I saw some students in NCC uniform. Obviously, I was absolutely enamoured by the uniform and also wanted to join the NCC. The havaldar on duty probably saw a small kid full of enthusiasm and asked me to get my father’s written permission. Next day, I was waiting for him, with the written application from my father, to take me in NCC. Due to my being underage even for the junior wing, I was issued with the dress and warned that I will not be taken for outdoor camps. I happily agreed. Then on, every Saturday evening was spent in preparing Ganji for the uniform and neatly pressing the uniform next day early morning. Sunday mornings were dedicated to NCC. The NCC taught me how to wear the uniform properly, how to tie my shoelaces neatly and of course the drill, marching, saluting, etc. Here I came in contact with some senior class boys from my school and we became great friends.

Then came the period when stories of ‘Mukti Bahini’ were all over the media, mainly newspapers and magazines. In Marathi, it was Mukti Vahini. The stories of valour in the face of atrocities by the Pakistan Army in erstwhile East Pakistan were rife. The statements of senior politicians were headlines every day, warning Pakistan to behave. Then we saw two major visits to Latur, a town which was gaining prominent importance in Maharashtra’s political sphere of influence. The first was the then Home Minister, Yashwant Rao Chauhan, who visited the political leadership and returned. That was the first time I saw a helicopter. The helipad was made very close to our school, so we kids got to see him from very close quarters.

The second visit was by none other than the then Prime Minister Indira Gandhi. She also arrived in a helicopter, addressed a huge gathering which had congregated to hear her. There was a tall podium constructed which was visible from everywhere. Now I don’t remember the speech but it was mainly on atrocities perpetrated by West Pakistan on citizens of East Pakistan. I heard the entire speech probably not understanding a word of it. I still very vividly remember shouting “Jai Hind” thrice after her. Today, as I recollect the events, I understand it was the Prime Minister garnering internal support for the operation she had already launched.

The next week, her visit was being discussed in the “corridors” of our school. I still recall our geography teacher telling us about General Yahya Khan who had become President of Pakistan by usurping power and declaring Martial Law. The name itself generates an indescribable abhorrent feeling. The abhorrent feeling soon turned into hatred as we heard stories of poison being put in wells of some of the East Pakistan villages. On that Sunday, during the NCC tea break, a plot was hatched by us students on the grounds of our great school to teach a befitting lesson to Yahya Khan.

The next day, during the interval (lunch break) of the school, we got together at the graveyard just behind our school. We had two large sticks, a broken matka and some old clothes. We made a big effigy of Yahya Khan wrote his name on a piece of paper and stuck it on the effigy. We went around the entire school shouting slogans of “Yahya Khan, Murdabad!” and finally went back to the graveyard to burn that effigy.

When I returned to class, the history teacher was waiting for the students who had participated in that sloganeering. To his surprise and to my utter horror, I was the only one from my class who was late and had also participated in that fateful event of burning Yahya Khan’s effigy. In a fraction of a second out came the cane, but that day I was prepared. My hand went out, with palm down, for the punishment, faster than the cane. The punishment luckily was only five canes on each palm. The last one was a spank on my bum for not having any remorse. I went home that day very happy to tell my father the entire event. The first time I did not get any punishment at home even after being punished in school. 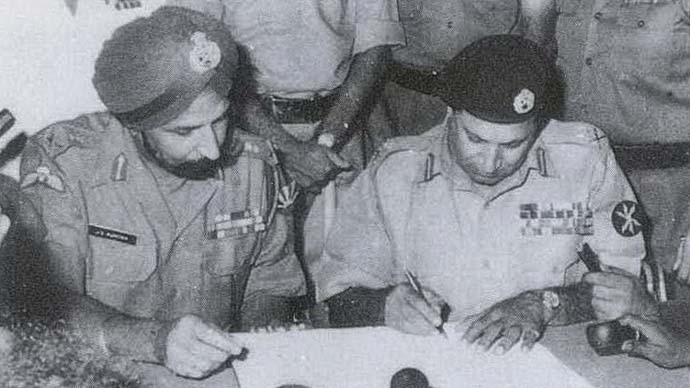 When the actual war began in December, we were volunteers to collect old clothes, blankets, sweaters and money. We went from door to door asking for donations for soldiers. The NCC cadets had collected the maximum amount. The old clothes were sold and money collected from the proceeds were saved for later use.

During the war, it was routine for me to read the newspaper every morning. My father used to sit on his easychair with the newspaper open in his hands and me reading the front page from top to bottom loudly. I remember very vividly reading the news of our submarine INS Khukri being sunk and the 7th Fleet reaching the Bay of Bengal. I did not understand why the headlines screamed about the 7th Fleet. Why was India so very scared? My father explained as to how it was a nightmare for India as the USA had sided with Pakistan. Our only ally, the USSR, was not in a position to assist and our Navy had to fight on this second front too. But the next day came a super stroke from Indira Gandhi herself. She had told very categorically that sea mines were laid to close the exit of the 7th Fleet. They could bombard Indian Army in East Pakistan but then they would not be allowed to return from the Bay of Bengal. Today, I understand what a masterstroke of strategic vision Indira Gandhi and her team had played. The 7th Fleet scared of the sea mines went out without firing a single shot.

The war was soon over and we all rejoiced. The next big festival in Latur was Holi. The festival is played with full enthusiasm and fervour. The choicest of abuses are hurled at everybody who is disliked. Obviously, the year of 1972 was dedicated to Yahya Khan. The best slogan for Holi was “Holi re Holi, purnachi poli! Yahya Khanchya *** bandukichi goli!”

Today as I reminisce on the Latur memories, I know as a 10-year-old I fought the 1971 war in my own small little way. I did fight for my country.

Also Read | When India brought Pakistan to its knees: How the 1971 war was fought and won

#Mukti bahini, #Latur, #Bangladesh liberation war, #1971war
The views and opinions expressed in this article are those of the authors and do not necessarily reflect the official policy or position of DailyO.in or the India Today Group. The writers are solely responsible for any claims arising out of the contents of this article.