What the nation needs to know.

A is for Arnab. He dominated the airwaves, though many wondered why. Questioning the nationalism of JNU’s students with a mike strategically switched off set the tone for a year that ended with calls to retaliate against Uri. What the nation wanted to know:

Arnab Goswami may be rude but is he wrong?

There were allegations of doctored tapes in the JNU case, which competitors played up, but Goswami did not come clean. Love him or hate him, he is not going away.

After a resignation that trended on Twitter (where else was it supposed to?), he said he will be back with "Republic", one can safely presume a 24X7 TV channel where the nation will get what it needs to know, albeit after much shouting and allegations of right-wing diatribes.

B is for Bulandshahr. Where a taxi driver’s family got raped but justice was both delayed and denied.

As the politicisation of the two rapes, of a mother and a daughter, gathered momentum, it became difficult to separate fact from fiction. The case was handed over to the CBI which seems to be the last non-partisan resort of all investigations. The teenage daughter in the case fought Samajwadi Party leader Azam Khan in the Supreme Court for allegedly saying the rape case was a political conspiracy to defame the Akhilesh Yadav-government. Khan had to apologise.

C is for Cyrus. As in Mistry. Fired as chairman, Tata Sons, after a boardroom coup. Mistry’s departure — and the reinstatement of the 78-year-old Ratan Tata as interim chairman — triggered a bitter, public spat that contributed to nearly a $10 billion decline in the market value of Tata's many listed companies, reported Reuters.

The media and Tatas security were seen in a televised brawl, Nusli Wadia emerged as Mistry’s unlikely champion, and everyone has come to know that Tata Senior is not an easy man to work with. By the time this story went online, Wadia had sued the Tatas and Mistry was preparing to do the same.

D is for Dalit. Stripped and beaten, tied to a tree and beaten, beaten for lifting cow carcasses. The media woke up to the atrocities and realised Dalits were oppressed, even though warning signs had come from the suicide note of a certain PhD scholar Rohith Vemula. 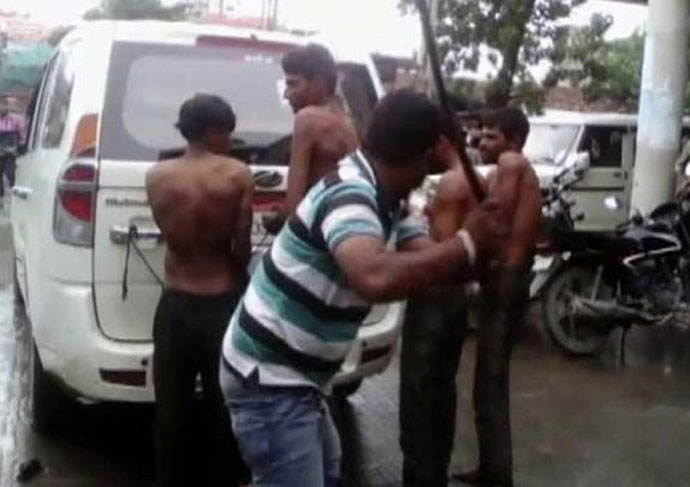 4 Dalit men were stripped and beaten over suspicion of cow killing in Gujarat's Una.

Dalits came out in large numbers and marched silently to Una which had generated this ghastly video footage. They also vowed to stop working on animal carcasses. Savarna press and its ignorance on the "Dalit uprising" also came in for a fair share of scrutiny. Last known, Dalit leader Jignesh Mevani, after getting profiled in news, had done jail time, for, one only can guess, leading the uprising.

Also for Demonetisation, which turned most of our currency into paper. Forbes called “immoral” and The Economist termed “a bungle that will cause unnecessary harm”. Not one to take criticism lightly, especially from Pakistanis — okay, okay, foreigners — the RBI barred The Economist’s journalists from its press conferences.

E is for E-mail. To send with discretion, as US presidential candidate Hillary Clinton discovered. The investigation into the Clinton-related e-mails on a laptop, which FBI chose to announce just 11 days before the world’s most powerful democracy went in for an electoral bout — this having been a particularly dirty fight — dealt a death blow to Hillary’s chances and put Trump ahead in the race. The FBI then cleared Clinton of wrongdoing, but the damage had been done.  See W.

F is for Fawad Khan. A Pakistani like most of us. But this one actually did “go to Pakistan” when told to do so. At the height of border tensions, and after delivering a power-packed performance in Kapoor & Sons, Khan became the poster boy of Pakistan’s artists who gain from an Indian audience. Fawad Khan. A Pakistani like most of us. But this one actually did “go to Pakistan” when told to do so.

MNS chief Raj Thackeray demanded Rs 5 crore for the army relief fund from director Karan Johar to ensure Ae Dil Hai Mushkil, where Khan had a small role, got to see the light of day, at a meeting arranged by the Maharashtra chief minister. Social media had the last word, calling it extortion. Go to P, T and Z.

G is for GST or Goods & Services Tax. A tax "reform" not known to be implemented in large countries with federal structures. But then neither is demonetisation in democracies. Stormy houses of Parliament and now an enraged Mamata Banerjee means it may not go through for another six months. Meant to convert our country into one economically, so that the same good is not taxed twice, at manufacture and consumption point, through multiple sales and excise taxes.

H is for horse, for beating purposes when you are angry, for trading purposes otherwise, in Uttarakhand. The brave Shaktiman, who we collectively failed, fell after being beaten by an angry MLA during a protest, never to rise again. The nation prayed together, a prosthetic leg was ordered, but the animal never recovered. The year also saw several horrendous videos of animal cruelty surfacing, including one of medical school students throwing off a dog from a rooftop just for a lark. Shaktiman, the police horse who died after being beaten by an angry BJP MLA. (PTI Photo)

I is for Inconvenience. A wonderful word, discovered, used, overused and misused this year. Was the Indian public just inconvenienced by de-monetisation or was the distress deeper? See Q.

J is for Judiciary. Which cried in front of Modi. After a turf tussle over the National Judicial Appointments Commission, the executive was in no mood to budge over procedure on appointment of high court judges.

K is for Kashmir, our “abhinn ang” where more than 3,000 people got pellet gun injuries this year, a high number of them teenagers. The unrest was triggered by the death of Burhan Wani, all of 21, in an encounter with the Army in July.

More than 84 people lost their lives in protests that resulted in a curfew that extended into Eid-ul-Zuha in September. Kashmiri newspapers tweeted their anger, and were punished with suspensions and shutdowns.

Supposed to have calmed down after demonetisation. See D.  Also, for Khatiya, the stealing of which showed rural distress.

L is for LoC. Where surgical strikes took place. Or not. Go to S.

M is for Mann, the AAP Member of Parliament who moonlights as a videographer. Last known, the MP from Sangrur was suspended from Parliament for live-streaming Parliament House details on social media.

N is for NOTA. Sullen but toothless. The Delhi University Students Union election saw its widespread use but the election went through.

O is for Ola cabs, whose drivers seem to be creating Twitter storms, claiming they screwed the company in favour of Uber.

P is for Patriot. Noun, opposite of anti-national. Ironically, also for Pakistan; just a difficult neighbour till the Modi government came to power. Now, half of us are told to "go to Pakistan" or are Pakistani. Used especially for Muslims or those not seeing merit in standing for the national anthem or reacting angrily when made to stand in bank or ATM queues. See Q.

In the long run, we are all Pakistanis.

Q is for Queue. Bank and ATM queues kept growing, killing people, sparking jokes and memes and embarrassing the government. In some places, people marked their places in queues with chappals; reports came in of some distributing tea and water to those in queues as acts of goodwill. But we learnt that queues keep you honest, and make you a patriot. See P.

R is for RaGa. Rahul Gandhi found his stride, post-demonetisation, imitating and irritating PM Modi by hurling accusations in rallies. From personal allegations, to making fun of the PM, he fired one salvo after another.

S is for Surgical strike - on the border, and against black money. Its opposite being strategic restraint. The surgical strike at the border was contested by Pakistan. Indians asking for proof were roundly criticised; but some good journalism, such as a story saying Pakistan’s army had been pulled-up for clandestinely supporting jihadi groups, got a Dawn journalist banned from leaving the country.

T is for trolls. Ministers unleash them on unsuspecting actors, then publicly admit doing so. Manohar Parikkar said at a public function that anyone speaking against the country would be taught a lesson in the same way an online trading company and an actor were taught. His team was smart and keep an eye on such incidents. It had prompted people to buy online and then return those items. Also for triple talaq. And, of course, Taimur. Also, Thackeray; who showed Bollywood — and Fawad Khan — its place. See F.

U is for Uri and Una. Two places that arrived on India’s map, both for heart-rending reasons. Dalits were stripped and beaten for skinning a dead cow in Una. In Uri, 18 ordinary soldiers slept in tents and got killed, the way pawns are in a bigger game of brinksmanship. See D.

V is for Viral. Not a post but the fever. From dengue to Chikungunya, Delhi got the full treatment, not a single family escaped. From a negligible presence in Delhi during previous years, 2016 saw more than 11,000 cases of chikungunya, reported IndiaSpend. This unprecedented attack of chikungunya overwhelmed the healthcare system, creating panic, when followed by the seasonal dengue outbreak.

W is for Weiner. He, or his laptop, brought down Clinton. FBI confiscated Wiener’s laptop to probe his sexting a minor. See E.

X is for Xenophobia. Literally, fear of foreigners. Displayed in the US, post-Trump. (In India, all the time for some time now.) Rise in race-related crimes and threats to immigrants were reported across America and campuses became particularly vulnerable, where Trump-supporters also demanded safe spaces for their politics, something others found ironical.

Y is for Yadav. The family that fights, and makes up. Then fights a bit more. Snatches mikes, and unsheathes swords. The best kind of prime-time television for viewers, and a good subject for opinion-makers, the Akhilesh Yadav-Mulayam Singh Yadav battle had the nation, not unused to family fights in the corporate world, riveted.

The young "scion" tried to re-invent the Samajwadi Party in a more modern format but from a merger with another party to re-inducting Amar Singh, had to eat crow, opposed by his own father and uncle Shivpal Yadav. Last known, nephew and uncle had separate candidate lists for Uttar Pradesh elections last year.

Z is for Zee which asked Pakistani actors to apologise for terrorism. Or “go to Pakistan”. See F and T.

Zee has been the only supporter of Pak artists. They either condenm terrorist acts, if not they can not do that, leave

Post your comment
#Antinationals, #JNU, #Demonetisation, #2016
The views and opinions expressed in this article are those of the authors and do not necessarily reflect the official policy or position of DailyO.in or the India Today Group. The writers are solely responsible for any claims arising out of the contents of this article.