How the Buddhist monks of Thailand and Cambodia are fighting the logging industry, one 'holy' tree at a time

After extensive deforestation in Thailand and Cambodia between 1961 and 1998, a unique trend has emerged: Buddhists monks are now bestowing monk-hood onto trees, in the effort to save them.

Saints are as revered (if not more) in India as in any other country in the world. We have saints ranging from Ramakrishna Paramahansa to “Paramahamsa” Nithyananda.

However, what we have to learn from South-East Asia is about Swami “Tree”ananda.

We kid you not!

Buddhist monks from north-east Thailand have been so worried about the environment, they have been ordaining trees with sainthood since 1990!

This unique trend emerged after a period of extensive deforestation in Thailand and Cambodia between 1961 and 1998.

Phrakru Pitak Nanthakthun started and has been leading ceremonies to dress trees in ochre robes. After locating the oldest and largest trees in a forest, he — in the presence of members of his surrounding lay community — recites the appropriate scripture and then wraps the trees in traditional orange robes — just as is done for a novice monk.

The tree is now sacred — and no logger will dare touch it.

The tree is now a sacred monk. To harm an ordained monk is a religious taboo and legal offence.

The Theravada Buddhist monks in Thailand follow the Buddha’s example of meditating in natural settings — particularly beneath trees. Their custom involves the practice of going into the forest during the rainy season of Phansa and building small huts, where they remain for several months to meditate. 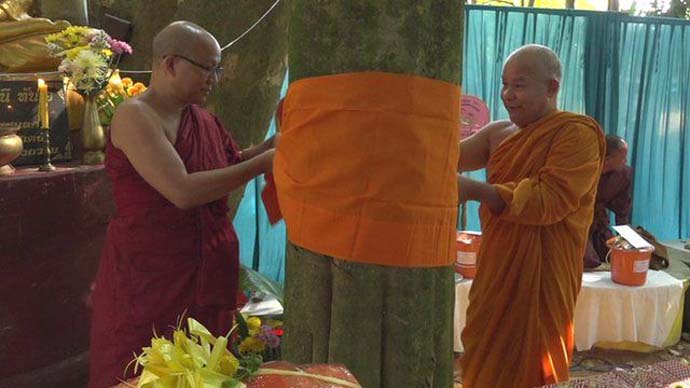 Traditionally, when the huts appeared, it was understood that human beings were not to disturb or damage the surrounding forest — slowly and very surely, it became an extension of the monks’ prayers and practice — the sacred land.

In the 1960s, thanks to the industrialisation influx, Thailand and Cambodia witnessed some of the most devastating logging and clear-cutting — 18.7 million acres of forest across the globe were lost to deforestation annually.

Between 1961 and 1998, an estimated two-thirds of Thailand’s remaining forest was reportedly destroyed.

In the 1980s, the logging efforts further intensified and entire forests began to disappear in the course of a single day.

Nature was to retaliate.

In 1988, a landslide, exacerbating floods — owing to the excessive deforestation of a mountainside — led to the deaths over three hundred people. The monks saw the land suffering and the people suffering as a result. A few monks began to reexamine Buddhist scriptures, seeking ways to protect the forests through traditional rituals and teachings.

The Buddha taught that all things are interconnected — the health of the whole is bound to the health of every sentient being. If you harm rivers, trees, animals and soil, you harm yourself. Very true, apt and profound, we say!

Some of the monks began to intentionally seek out illegally logged forests for their Phansa meditation. However, this was not feasible — some monks were even assassinated.

As the practice became more common in Thailand, its impact dulled — however, the practice had already crossed the border into Cambodia. The official religion of Thailand and Cambodia is Theravada Buddhism.

If you thought that the monks had it easy, you are very mistaken. Though traditionally revered in Cambodia’s majority-Buddhist society, monks today are not immune to the government’s crackdown on civil society actors.

“They’re very wary of the monks getting together,” Chantal Elkin, a program manager for The Alliance of Religions and Conservation, reportedly told Sojourners. “Forest activism is [seen as] a threat to the government.”

In October 2017, about two dozen Buddhist monks travelled from several provinces across the heavily logged Cambodian landscape and met at a local pagoda to attend a workshop held by The Alliance of Religions and Conservation. For Cambodia’s emerging network of “ecology monks” working in an increasingly authoritarian climate, the meeting was a critical and rare opportunity to discuss best practices for local conservation projects.

Then, two cops showed up and shut it down.

The monks were visibly upset. However, in their inimitable style, they took the two officers (who were local cops and not antagonistic to the meeting but seemingly following orders) up the hill. The group had ordained a tree into the Buddhist faith there. The cops saw this and then reportedly dispersed — as did the monks.

The practice has been saving the remaining forests of Thailand and Cambodia, where more than 90 per cent of the population in both countries identify as Buddhist.

There is no reason why our country — known as the land of saints — should not have saints in every street, in every house and forests of saints who bestow not wisdom, but the very life-breath!

Post your comment
#Ecological religion, #Tree monks, #Tree saints, #Reforestation
The views and opinions expressed in this article are those of the authors and do not necessarily reflect the official policy or position of DailyO.in or the India Today Group. The writers are solely responsible for any claims arising out of the contents of this article.