How I became an ‘anti-national’ on Times Now

Kunal Purohit, an Indian journalist studying at SOAS, London wrote about how the news channel targeted Not In My Name protesters.

Why does one choose journalism? To fight injustice, wrongs and to give a voice to those whose voices have been suppressed. Those were my reasons for taking up journalism. But what happens when journalism becomes the stick that the powerful yield to perpetrate injustices, commit wrongs and muffle voices instead?

After over ten years of being a journalist, I became the protest I used to cover. In the process, I found myself becoming the headline, rather than writing one. The occasion was that we, the India Society at the the School of Oriental And African Studies (SOAS) decided to anchor the London arm of the Not in My Name protests against mob lynchings in India, held on June 28. After that, for two days, prime time on Times Now, which a few optimistic souls continue to hopefully describe as news, saw my face plastered and zoomed into. The ticker? "Protests Defame India in London". Under that, in bold, it screamed Gandhi Statue Desecrated".

Alongside my face was the Mahatma’s statue, with a placard resting on his lap. The placard read "Republic of Lynching", placed possibly by one of the protesters who participated. We don’t know who did it but then, it doesn’t even matter. The slogan was provocative. But, can a slogan ever be as provocative as seeing videos of homes being burnt, people being thrashed even as they cry for mercy, solely on the rumours of eating beef? The act of placing the placard in the Mahatma’s lap was described as having desecrated the statue. The statue is inanimate. What makes the statue is the legacy of the man in whose form the statue was sculpted. What can be desecrated is his legacy.

Is placing a placard a desecration or is it pulling down 16-year-old Junaid’s skull cap, calling him circumcised, a beef-eater and lynching him? Or raping two women in Haryana’s Mewat as punishment for eating beef? Or lynching dairy farm owner Pehlu Khan for transporting his cows and then the ruling party justifying him by calling him a cattle smuggler? Or flogging seven Dalits in in public with sticks for skinning a dead cow in Mahatma’s Gujarat, 35 kilometres from where he was born?

For Times Now, 80-odd people gathered in London and voiced their concerns and fears for India is a bigger national shame than the 63 attacks that have happened so far in the past seven years, of which 61 were reported after Prime Minister Narendra Modi took office. Times Now wants us to believe that a motley group of students planning a protest is anti-national propaganda and a conspiracy to defame India on foreign soil, not the 28 deaths that have occurred by the mindless violence unleashed by gau rakshaks (cow-protectors).

Times Now called us the "Afzal-JNU" league. Rahul Shivshankar, the channel’s ringmaster, said that the protest was a picnic for us. His reporter scolded us. “The government is doing all it can. These individuals don’t even want to say sorry for carrying out such a shameful act.” He meant us, protesting the lynchings not those carrying out the lynchings, in case you got confused. 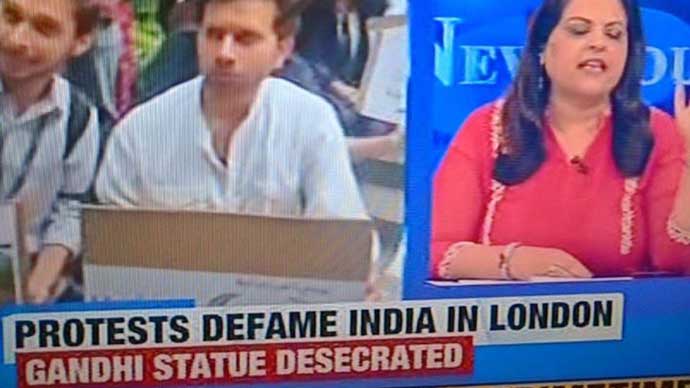 Being "Exposed" TN made us a primetime debate, starting 8pm, claiming that they had "exposed" who was behind the desecration. This exposé on us is textbook material for any journalism student out there. TN "investigated" and found that former JNU Students Union vice-president Shehla Rashid had "orchestrated" these protests and organised them and that we were all her followers. In a parallel world, this claim would have to be substantiated with hardcore evidence, maybe transcripts of conversations, details of the planning etc. But in TN’s world, all they require to prove this is a Facebook post and a selfie.

As part of our society’s mandate, we invite various eminent public personalities associated with India to speak on issues that the society and its members feel are crucial for public consumption. As part of the society, Rashid was one of the speakers we’d offered a platform to in association with the South Asian Institute at SOAS. The talk was held in one of our classrooms and attended by 30 students and academicians.

Following that, when Rashid learnt that our society was organising this protest, she gracefully reached out to her contacts and friends on Facebook and helped us spread the word about it. Amidst all this, for TN, the most crucial piece of evidence linking Rashid to the desecration was that, while she was in London, she had taken a selfie with the same statue and posted it on her Facebook. For TN, this selfie was the first sign that Rashid had set her eyes on getting the statue desecrated.The result of all this?

On social media, there were calls to lynch us. Some called us traitors, some said we were bastards for holding such a protest. One even threatened that he would ensure this protest wouldn’t go through.We ignored these reports as we realised that TN had ceased to be a news channel a few years ago. We also realised that engaging with it would only legitimise exactly what they wanted us to do: stop thinking about the lynchings and the reasons behind the protest and, instead, direct our outrage at an imaginary village, which in this case was us. This is what they did with Kashmir. This is what they did with Rohith Vemula. Little did we realise in this fight that we were going to be next.

The choice we must all make

In the new India we live in, the boundaries are clearly marked out. Anyone who speaks out will be screamed down, abused down or, painted an anti-national. Worse, you could face all of that and then be lynched. Like 16-year-old Junaid Khan. Which is why, I, along with all those who came that day, stood up and made a choice. We spoke up for Junaid, for Pehlu Khan, for Akhlaq as well as for Ayub Pandith and every other victim of these lynchings. Those in power, those in some sections of the media have chosen where they stand. It is time that we all choose, too.

PS: Times Now made similar attempts to discredit the Not in My Name protests in Pakistan too. Here’s proof that we weren’t alone in this.

Also read: Not In My Name protest in London: Is Modi afraid he will lose his fans abroad?

#Mob lynching, #Junaid Khan, #Not In My Name