Thank you, smartphone. Humanity is doing fine without talking

Asha Bhosle recently tweeted a photo that had four other people in it and they all were busy on their smartphones. She wrote: “Such good company but still, no one to talk to.”

Bagdogra to Kolkata... Such good company but still, no one to talk to. Thank you Alexander Graham Bell pic.twitter.com/PCH92kO1Fs

The tweet went viral and people went “yes, yes”, joining her in mourning. Oh, how the smartphone has ruined us. We believe social media has made us aloof, rather than bringing us together.

Aadarniyaa Asha Tai, I beg to differ. Stop talking about how people don't talk anymore. You posted that on social media. If we weren’t on social media, we wouldn’t know about your woes. The irony and the sheer meta-ness of it. Thanks to the constant talk about not talking, there is increased pressure on people at home, at friendly gatherings, heck, even in work spaces, about why they are not talking.

I am doing fine. I do remember the days when people used to talk — and I so don't miss those days. Strangers making acquaintances on trains, striking up friendships and yapping through the journey. Beta, Uncle ko namaste bolo; beta, uncle ko 11 ka table suna do, beta, poem recite karo….

Remember when you had to talk, whether you wanted to or not? (Photo: YouTube screengrab)

Thank Martin Cooper for inventing the mobile phone (yes, Tai, Alexander Graham Bell invented the dumb phone). Thank Steve Jobs for making the smartphone popular. We don't have to talk to people we don't want to.

The talk was always small. About each other's kids, about how the workplace sucks and how the Indian Railways was the pits. It's not that we have stopped communicating — it's just that communication has shifted to broadcasting on social media. People are connected all the time and no information is out of reach. WhatsApp groups for family, Twitter for strangers, Instagram for fans, Snapchat for lovers, people are talking all the time.

That's what they did in old times too and ended up killing each other because the bad guy won’t stop talking. Loose talk has been the single biggest cause of violence through history. Twitter brawls don't get physical at least. Inside the household, peace has been restored by the smartphone as both wife and husband are busy LoLing to silly school-time jokes on school groups on WhatsApp. Nature has created a balance — should we disrupt it just for the sake of old times?

The smartphone conversations also have the same content, if not being better than what they used to be. It's not that people talked sense when they did talk. It was mostly false information, rumours and gossip about the neighbourhood. Today's gossip is at least Bollywood, which is an upgrade. Fake news flies faster, so does the debunking. We had to believe Uncle X about Incident Y. Today, we can search and research whether his jabbering was authentic or not.

We literally have Google Earth in our palms. We don't have to depend on grandad's olfactory to know whether it will rain tonight. The weather app sends an alert. We don't have to talk to anyone. Siri or Google Assistant won't bore you with details about how painful the knee gets when the easterlies are in.

Parents talked to someone in the puja room. Except that there wasn’t anyone else. If this happened outside the puja room, it would be creepy as hell. But hell doesn’t exist. Clerics have been lying to you. 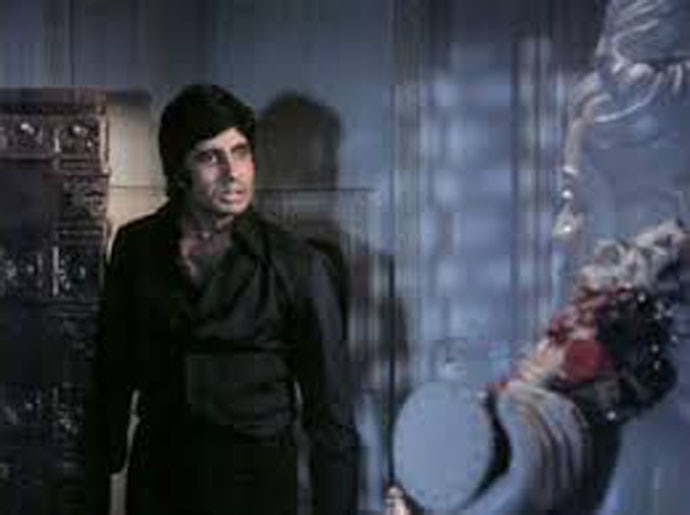 The angry young man talked angrily a lot, including in here. (Photo: YouTube/screengrab)

There is no final day. If there is and we are advancing that by using our smartphones, I say, bring it on. Dinosaurs were extinct before humans even came into being. Humans just hurried the process for every other species on earth. So if these anti-social tools will kill us all, as Akshay Kumar told us in 2.0, well, time we died and the planet survived. With smartphones keeping people awake all night, they are producing fewer children for posterity. Show me a society with low smartphone penetration, I will show you a society with high fecundity and higher stupidity and a lot of talking. You expected a pun in the second-last line of this piece, it’s your fault.

When was talking a virtue? I clearly remember a teacher telling us that God gave us two ears and two eyes but only one mouth, because we should hear more, see more and talk less. I also remember the idiotic joke about opening your mouth and removing all doubt. Where were those talks about who could touch these? And who could never? (Photo: Twitter)

Asha Tai would have been on her smartphone like everybody else in that photo, but then, she gave it to someone to click that photo. We should express ourselves when needed and talk when necessary. We are fine without talking for the sake of talking. Nonsense.

Post your comment
#Google Maps, #Social Media, #Smartphones, #Asha Bhosle
The views and opinions expressed in this article are those of the authors and do not necessarily reflect the official policy or position of DailyO.in or the India Today Group. The writers are solely responsible for any claims arising out of the contents of this article.