DailyOh! How Big B settled scores with Andrew Flintoff, to 103 get Covid in Bengaluru post party

Ash‘win’ won the player of the match as India won the second of the four-match Test series against England.

Ash‘win’ won the player of the match as India won the second of the four-match Test series against England. With India and England both winning a match each, the Test series has been levelled for now. Right after the levelling of Test series scores, in T 3816, superstar Amitabh Bachchan decided to level his own scores alongside.

Bachchan was playing a match against Andrew Flintoff. This match, mind you, was on since 2016. A Test match goes on for five days. But this tweet match has been on for five years. Let’s go back five years in time. In a Twitter post after Virat Kohli played a match-winning innings in 2016, English player Flintoff wrote, “At this rate @imVkohli will be as good as @root66 one day…” Bachchan then asked who Root is in a bid to downplay the comparison. But the question ended playing up the comparison. On February 6, Flintoff resumed the tweet match taking a dig at Bachchan’s tweet that had asked Root to be uprooted. Celebrating his win, along with India’s victory, Bachchan broke into a “Yeeeeeaaaaahhhh and YEEEEAAAAAHHHHH” and adding that Root hasn’t just been uprooted, but uprooted and dried too. Flintoff would probably have to wait for England to outplay India in the next two Test matches to reply to Bachchan. This match will be on as long as India and England play matches and as long as Flintoff and Bachchan tweet. 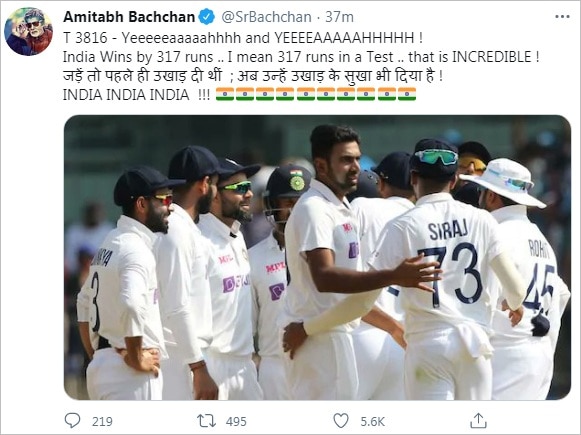 When play resumes, we will let you know. For now, from the Test to the toolkit. Disha Ravi, who is in police custody, apparently is the reason Greta Thunberg deleted the original toolkit on February 3. At 9.25 pm, Greta told Ravi, “It would be really good to have it [toolkit] ready now… I will receive so many threats because of this… It’s really blowing up.”

To which Ravi wrote “sending it to you...” Moments later, Ravi told Greta to not post the toolkit at all. It turns out Greta had by then already posted the kit. Next, there should be a toolkit on how to handle a toolkit.

There should be a toolkit on how to handle an arrest too. The Delhi Commission for Women has sent a notice to Delhi Police saying the cops did not apply for a transit remand, which the police are supposed to have if they put an accused, any accused, in transit. Disha Ravi was brought from Bengaluru to Delhi. Greta and Ravi’s Fridays For Future apparently was under police radar in July 2020, much before the toolkit came under the radar. Actually, the radar missed the toolkit because the toolkit did not exist then.

We will now head to Mumbai, where mayor Kishori Pednekar has put the lockdown in the hands of the people. Who has the key? Pednekar. If people do not take precautions, Pednekar has said that the administration would be forced to introduce another lockdown. So the decision of whether the city would be locked up or not rests with the people and depending on what people decide, Pednekar would turn the keys.

Pednekar should be allowed to stretch the ambit of her veiled warning to Bengaluru too. In Bengaluru, 103 people in a residential building got Covid after some of them attended a party on February 6. The party people have passed on the virus to drivers, maids, cooks and fellow residents of the building. Over 100 residents of a Bengaluru residential building have tested positive for Covid-19.

That’s not the only bad news we have. Did you hear of what happened in Madhya Pradesh? A bus carrying 54 passengers fell into a canal after the driver reportedly lost control over the vehicle in the Sidhi district. 38 people died. Some people, it is reported, managed to swim to safety.

No place is really safe. In Australia, would you believe it, a woman was reportedly raped in the country’s Parliament? The woman said she had been raped in the office of Defence Minister Linda Reynolds in March 2019. The rapist, she alleged, also worked for Australian Prime Minister Scott Morrison's ruling Liberal party. Morrison was quick to apologise. The woman said she did not pursue a complaint because she feared for her career. Morrison said, “That should not have happened, and I do apologise… I want to make sure any young woman working in this place is as safe as possible.” How safe is possible? As safe as it is for any man.

But Parliament once failed to be safe for a man too. This when the man was the British Prime Minister himself. The incident dates way back in the past to 1812. On May 11 that year, a merchant named John Bellingham blocked Spencer Perceval’s path, pressed a pistol against his chest and shot him in the lobby of the House of Commons. John was under debt and blamed the government for his debt. The government blamed Bellingham for Spencer’s assassination and so tried, convicted and sentenced John to death — all within four days. John was caught on the spot, so no time was wasted in catching him. Much later, many questioned if the quick execution of John was aimed at covering a larger conspiracy. What conspiracy? The possibility that John was acting on behalf of a consortium of Liverpool traders who were against Spencer’s economic policies.

We will leave Spencer to Britain because we got to come back to India, even if we never went to Britain. India is celebrating Basant Panchami today. In West Bengal, political parties are celebrating the day with more politics over Durga, Saraswati and Ram. We will leave them with that and talk about Basant Panchami, which actually marks the beginning of spring. Spring is the short season between winters and summers. In cold countries, people feel very happy about it because, you know, the cold can get too cold. In countries like India, spring is the time to begin dreading the summer. So, before summer hits you, this is the season when you don’t have to layer yourself in clothes that get heavier than you and you don’t have to run the AC full-blast. You can literally be walking around with spring in your feet.

Spring, our Word Of The Day, springs from old German word springen. Early on, springen meant the head of a well and ‘rush out in a stream’. Basically, in both senses, the word referred to the start of something. Spring season marks the start of the springing of plants. Before spring was called spring, it was called lent in Old English. Lent was the ‘springing time’ of the year. There, however, is no time to spring a surprise. The season has begun and you can mark the beginning of the season with some saffron rava kesari if at all you need a reason for good food in a good season.

We will leave you making the rava kesari and having it once you have made it.

Also read: How Election Commission can use EVMs as a tool to decriminalise politics

#Disha ravi, #Greta thunberg, #Coronavirus, #Ashwinravichandran
The views and opinions expressed in this article are those of the authors and do not necessarily reflect the official policy or position of DailyO.in or the India Today Group. The writers are solely responsible for any claims arising out of the contents of this article.