India is seeing two extreme hydrological conditions in different parts. Bihar, West Bengal, and Assam are flooded. The flooded Brahmaputra River in Assam and the Kosi River in north-eastern Bihar are wreaking havoc on property, biodiversity and life. Connectivity to Northeast India has been severely affected.

The swelling of the transboundary Kosi River has forced Nepal to open the lock-gates of the barrage, submerging downstream northern Bihar.

On the other side of the hydrological spectrum, there are dry spells in northwestern, western and southern India. The south-west monsoon, responsible for the bulk of the precipitation in the Indian peninsula, is late. This has caused irreparable agricultural loss. The problem is compounded because of an urban water crisis — previously unheard of in this part of the world. South Asia, on the whole, is perceived to be water-rich. But today, Chennai shows how the economy of a high growth urban centre can come to a standstill during a resource crisis. 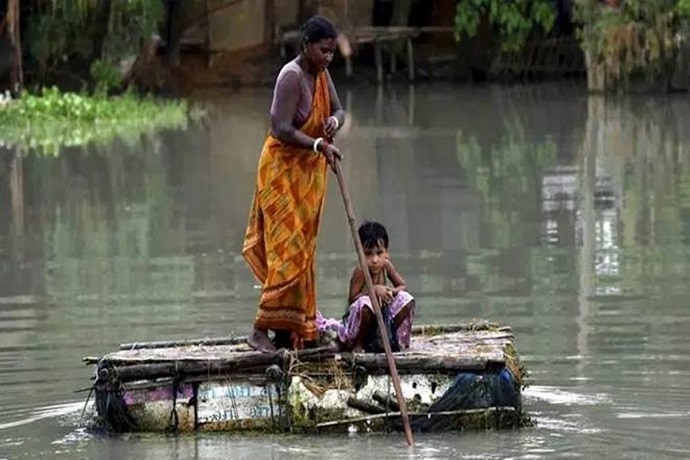 When it rains, it pours or not at all: Northern Bihar and Assam are flooded as south India faces a water crisis. (Photo: ANI)

How do we explain this paradox? Given these hydro-meteorological extremes, the call to interlink rivers — to transfer water from ‘surplus’ river basins to ‘deficit’ water systems — is again gaining currency. This is ecologically unsustainable and economically unviable. It is important to understand that extreme hydro-meteorological conditions are natural, but their impact is largely due to man-made factors. The temporal and spatial variability in precipitation need not be linked to climate change until the time there is any irrefutable evidence based on long-term data. They can be seen as anomalies arising out of eco-meteor-hydrological factors. But we should not lose sight of the damage to society caused by these anomalies (because of climate change or otherwise).

Let us first look at floods. These are annual phenomena that offer some very important ecosystem services. The floodwater, upon receding, leaves behind rich silt and micronutrients that have helped in the natural creation of the most fertile agricultural land. Sediments carried by flows result in soil formation, a critical supporting service of the ecosystem. However, nature, by itself, provides the sink for floods. Wetlands are the primary component of this ‘sink’ mechanism. Interlinking rivers is not a solution to Chennai's water crisis. (Photo: IANS)

There has been extensive land-use change over the Assam floodplains and in northern Bihar. As wetlands disappear, this sinking capacity of the ecosystem has been inhibited. Moreover, human settlements have proliferated on the floodplains. This has been encouraged by the construction of embankments (especially in the Kosi river basin) that get breached during high flows.

Lack of organic knowledge and ignorance of existing traditional knowledge of river systems have led to the failure of floodplain zoning systems. This leads to floods being treated as ‘damage’, instead of an annual hydro-meteorological phenomenon. Similarly for dry spells, many have attributed the water scarcity in Chennai to the vanishing wetlands due to unbridled construction spree causing substantial land-use change. The groundwater recharge capacity of peninsular India (consisting of the western and southern parts) is substantially lower than that of the Gangetic plains. The peninsula is substantially rocky, with low permeability of the landmass. This inhibits groundwater recharge from meteorological and hydrological sources. After the 2015 floods in South India, a report by the Comptroller and Auditor General (CAG) denounced the unbridled construction activity in the peninsula that revealed the shrinkage of areas under water bodies by 2,389 acres between 1979 and 2016. This large-scale land-use change dried out a critical source of water for Chennai, led to a decline in the flood sinking capacity of the ecosystem, and cut off the area’s limited groundwater recharge sources.

Dry spells in agriculture can always be managed with the right type of crop selection and diversification that has hardly happened because of minimum support price regimes.

They tilt the terms-of-trade (the ratio of prices of two competing crops) in favour of water-consuming rice and wheat crops, instead of millets, even during dry months. Water scarcity leads to crop failure and losses to the farm community. Electricity and irrigation water subsidies also lead to water wastage. Authorities can always explore the option of inter-sectoral water transfer from agriculture to urban sectors — recent research shows that this increases farm productivity, and helps the cause of urban India as well. The Supreme Court also acknowledged this in its February 2018 order on the Cauvery water dispute. So, the apparent hydrological paradox is natural, but its impact is man-made. Droughts and floods are integral components of the broader eco-hydrological cycle and should be seen in the wider context of associated ecological processes. They cannot be handled through human interventions in the form of linking rivers. That will completely alter flow regimes, an eventuality whose impact cannot be assessed easily. It will definitely lead to great ecosystem damages, as seen in manmade interventions like dams, barrages and embankments. The idea of water governance should be based on demand management and adapting to the moods of nature, instead of trying to control it.

Also read: Dear Virat Kohli, I implore you to understand the value of water