Allahabad University Vice-Chancellor Sangita Srivastava has said that the azaan from loudspeakers disturbs her sleep at 5.30 am every day.

Calling out for a person is fraught with risks. Chances are your call may not reach the intended person. Worse, people between you and the intended person may hear the call. If your call was too loud, these ‘in-between’ people may also give you the looks. Allahabad University Vice-Chancellor Sangita Srivastava has sent a letter to Allahabad DM. The letter says ‘the call to prayer’ that blares through loudspeakers from a nearby mosque should stop. Sangita Srivastava says the call made through loudspeakers every day at 5.30 am disturbs her sleep. 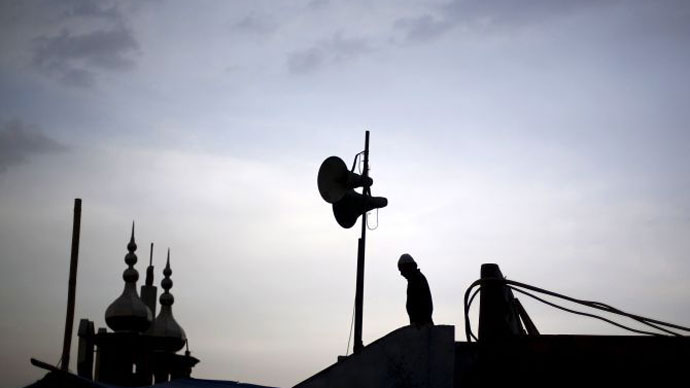 Allahabad University Vice-Chancellor has complained against azaan on loudspeakers in her area. (Photo: Reuters)

The call, also called azaan, is made five times a day but professor Sangita seems to have a problem with the one made in the morning because “the sleep so disturbed does not resume even after trying very hard”.

Allahabad DM may take time to act. For immediate sleep relief, professor Sangita could consider shifting to Karnataka. The Karnataka State Board of Auqaf has issued a circular to all the mosques and mausoleums to not use loudspeakers between 10 pm and 6 am.

From Karnataka, let's head to Maharashtra where following the arrest of Sachin Vaze in the Mukesh Ambani bomb scare case, Hemant Nagrale has replaced Parambir Singh as Mumbai Police Commissioner. Parambir was Vaze's boss when Vaze was allegedly involved in the case so Parambir may have faced the axe for not being able to mind his men. Maharashtra, meanwhile, seems unable to mind the virus too. In Maharashtra, there is no relief from the pandemic and the politics over the pandemic. Union minister Prakash Javadekar has said Maharashtra maange more vaccines but has used only 44 per cent of what it has been given. Read another way, 56 per cent vaccines with Maharashtra are lying unused. So, according to Javadekar, Maharashtra is ordering vaccines in advance but administering them with delay.

Prime Minister Narendra Modi has, meanwhile, done a micro-analysis of data and arrived at the conclusion that 70 districts have seen a 150 per cent rise in Covid cases. Maharashtra, Punjab, Karnataka, Gujarat and Tamil Nadu are states that house these 70 districts. Prime Minister Modi suggested decisive steps to prevent a nationwide outbreak today during an interaction with chief ministers. Union Home Minister Amit Shah was also part of the meet. Bengal CM Mamata Banerjee gave the meet a miss because her party today released its manifesto for the state Assembly elections. Election rallies anyway are as far removed from Covid protocols as elections from autocracies.

Yes, we are heading to Congress leader Rahul Gandhi. Rahul in an interaction with Brown University steered by political scientist Ashutosh Varshney said that institutions are under assault. The assaulter, as per Rahul, is the ruling party. The Congress party also rules a few states but Rahul, you know, meant the party ruling the Centre – the BJP.

Politicians can’t talk beyond votes but Saddam Hussein did. In fact, Saddam the Iraqi dictator penned a romantic novel - Zabibah and the King. The novel was published in 2000 anonymously. Which dictator would want to reveal his romantic side? A romantic dictator. But Zabibah and the King is less romance and more politics. It is in fact an allegory, a narrative in which a character, place, or event delivers a broader message about real-world issues.

For Saddam, the real-world issue was the US invasion of Iraq at the end of the Gulf War. The plot of the book however revolves around a powerful ruler of medieval Iraq and a beautiful commoner named Zabibah. Zabibah is married to a cruel man who rapes her. The husband represents the US, the rape represents US invasion, the ruler Hussein – who represents dictator Hussein - fights the rapist. Zabibah, on the other hand, represents the people of Iraq.

Oh, but did you read about the latest shooting in the (invader) country? Eight people died in the shootings at two massage parlors in Atlanta and one in the suburbs in the US. Hours later, a 21-year-old man was arrested for the shootings from Georgia.

Shootings in the US are common because it is easy and cheap to buy guns to shoot. Shooting, the Word Of The Day, a phenomenon of every day in America, comes from the word shoot, which in turn comes from Old English word sceotan. Sceotan meant ‘to hurl missiles, strike, hit, push, rush or wound with missiles’. There are shooting seasons in which shooters aim for birds. In the US, shooting people is a perennial activity because neither people-sighting not gun-buying is seasonal.

Heard of The People in the Trees? No, it’s not where they are lurking to escape shooting. The People in the Trees is a book by Hanya Yanagihara. Hanya says she got inspiration for her debut novel from Daniel Carleton Gajdusek, who was revered in the scientific community before being accused of child molestation.

Why is the book named The People in the Trees will become clear when you read the book but TMC believes Suvendu Adhikari hasn’t lived in Nandigram in the last six months and hence is not a resident of Nandigram and hence should be removed from Nandigram’s electoral rolls. If Suvendu’s name is removed from the rolls, he will not get his own vote. Is TMC only raising questions over Suvendu’s residential address for that one vote? No, TMC has also demanded that action be initiated against Suvendu for ‘furnishing false particulars’.

You may not find this a serious enough allegation to deserve action, but the Supreme Court has said the decision to cancel 3,00,00,000 ration cards because they are not linked to Aadhaar is “too serious”. The court has asked the Centre and all state governments for responses.

In a serious development, BJP MP from Himachal Pradesh’s Mandi was found dead at his Delhi residence and it is suspected he died by suicide. Ram Swaroop Sharma was 62 years old. The BJP has cancelled its parliamentary meeting today because of the development.

On that note, we would call it a day today.

Also Read: When and how will the Covid-19 pandemic end?

#Rahul Gandhi, #Narendra Modi, #Covid-19 vaccine, #Azaan
The views and opinions expressed in this article are those of the authors and do not necessarily reflect the official policy or position of DailyO.in or the India Today Group. The writers are solely responsible for any claims arising out of the contents of this article.