No one wants a Barbie doll

This generation does not relate to her, just as it doesn't relate to Archie Andrews or Asterix or Tintin.

Last week, on the occasion of International Women's Day, Barbie manufacturer Mattel launched 17 new dolls as part of its Inspiring Women series. The collection features role models such as aviator Amelia Earhart and Mexican artist Frida Kahlo, among others.

The new dolls were apparently designed in response to a study conducted by the company, which found that 81 per cent mothers are worried about the type of role models their daughters are exposed to, wrote Gunseli Yalcinkaya in Dezeen.com.

This got me thinking. Do the kind of dolls kids play with really influence how they think? Do they have any long-term impact on the child? I know Barbie has long been reviled for negatively impacting body image in young girls, and Barbie's plummeting sales obviously bear testament to this worldwide opinion.

According to an article titled No One is Coming to Barbie's Birthday Party in CNBC.com in March 2016, Barbie was really in the doldrums. "According to figures pulled from company filings, Barbie brand sales are at their lowest point in at least 23 years, and the percentage of Mattel sales coming from Barbie is possibly at an all-time low."

This is probably the reason Mattel has been rethinking its strategy for the past few years and its recent launches include a hijab-wearing doll, and a Fashionista line in 2016 featuring curvy, petite and tall models.

But, for all the brouhaha, there aren't many studies that can link Barbie to long-term body image issues. In the studies I found (and many had very small sample sizes), the results were not very conclusive. In a report titled "Exposure to Barbie: Effects on thin-ideal internalisation, body esteem, and body dissatisfaction among young girls", a researcher studied a sample of 160 girls (5-8 years) in Adelaide, Australia, and concluded, "Results indicated that exposure to Barbie, irrespective of format, led to higher thin-ideal internalisation than exposure to the control, but had no impact on body esteem or body dissatisfaction. This suggests that interacting with Barbie may encourage girls in early primary school to adopt a preference for a thin body, but with no immediate effect on body image. The long-term impact of Barbie exposure on body image remains unknown." The report is on US National Library of Medicine's site.

The same site cites another research conducted in the UK on girls of the same age (5 to 8). In this study girls between 5.5 and 7.5 years were exposed to images of Barbie, and the older girls to images of Emme, a doll with more realistic body proportions that was endorsed by the American Dietetic Association as a healthy role model for young girls.

The report concluded that "Girls between the ages of 5.5 to 7.5 years old had lower body esteem scores and a greater discrepancy between actual and ideal body sizes if they were exposed to images of a Barbie, whereas exposure to images of the Emme doll had no effects on these variables. The author reasoned that the age difference can be explained by the fact that the girls under the age of 7.5 are still developing a self-concept and therefore use Barbie actively as a reference norm. However, children between the ages of 7.5 and 8.5 experienced greater actual and adult body discrepancies if exposed to images of Emme, whereas no effects were found for exposure to images of Barbie in this age group. This was attributed to the fact that girls older than 7.5 years have already internalized the thin ideal as a cognitive self-concept structure."

This led me to reflect on my own childhood and that of my daughters. I never played with Barbie as a child, I think largely owing to the fact that it wasn't available in India. The only doll I can vaguely remember is one of those large plastic ones with blonde hair and blue eyes and terribly unreal, large eyelashes and lids that would open and close. I still remember two plush toys, though, that were very dear to me. A grey donkey with adorable googly eyes, and a brown teddy bear that I lost on a camping trip.

Did I grow up with body image issues? Yes, and no. But Barbie had nothing to do with it. When it came to my older daughter, I never gifted her a Barbie and because I did not subscribe to the Barbie phenomenon, I usually passed on the Barbies people gifted her. I have to say, none of them were from any of these new launches and they were just the regular thin-waisted, big-busted versions, give or take a dress here and a skirt there. 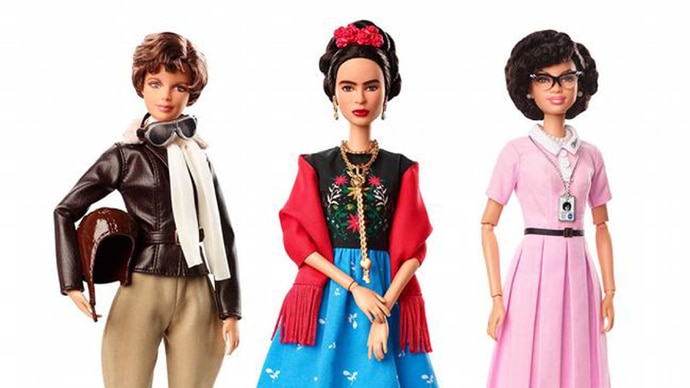 But can I blame Barbie?

My daughter grew up - like me - preferring to live in shorts and tracks, and loving sports. She's never been into dolls. Did I mould her that way by removing Barbies from her repertoire of dolls? Who can say. But with the younger one, I neither had the time nor the inclination frankly, to be so involved, and Barbies did creep into her toy boxes. Does she love dressing up in frilly dresses, with matching clips and necklaces-yes.

But can I blame Barbie? I doubt it. She had strong likes and dislikes early on and a preference for choosing her own clothes right from the time she was going to playschool.

I honestly don't know if a doll can be responsible for young girls internalizing that 'thin is in' and then having long-term body image issues. An entire environment contributes to that-including the mindset and conversations at home, the friends one makes, and what girls are exposed to in the media. Sure, it would be really nice to gift your child a doll modelled after an inspiring personality, but last I checked, the Amelia Earhart doll was not only sold out on the Mattel site, it was also classified under "Ages: For the adult collector" and priced at 29.99 USD, which is a tad more than Rs 2,000.

Moreover, half these new dolls never seem to reach Indian shores because I can't recall ever seeing any of them on shop shelves in recent years. The reason I checked this specific doll is because my seven-year-old is studying about Earhart right now and gifting her a doll based on an inspiring historical person might make sense - it may just actually cement that link and inspire her, leading to some long-term association in her head.

But I think Barbie's decline has more to do with the fact that the way kids interact with toys has changed. In a digital world, where you can dress someone up, paint their nails, give them a bath, all at the slide of a finger, a plastic doll seems almost rudimentary. While pretend play is an important process in growing up, kids outgrow the phase soon enough. My daughter's Barbies are now at the bottom of the toy box and I haven't seen them in ages.

Also, movie merchandise is now so huge that figurines based on film characters are much more in demand - the minions are short and stubby, but it doesn't matter. Elsa and Anna from Frozen, both empowered princesses (a far cry from earlier damsel-in-distress Disney Princesses and a huge success for the company) have been coveted in recent years because there is a really motivating story girls can relate to, and it has nothing to do with body size.

So while a new collection based on real women is welcome, I think Mattel should probably consider gracefully retiring Barbie and letting her find her place in the annals of history (car makers do that all the time).

Barbie's sell-by date has long passed, and this generation does not relate to her, just as it doesn't relate to Archie Andrews or Asterix or Tintin.

Instead, Mattel should focus its energy and resources on envisioning a new doll, and build an entire story around it - one that girls of today, of any shape and size, can relate to.

Post your comment
#Barbie, #Barbie dolls
The views and opinions expressed in this article are those of the authors and do not necessarily reflect the official policy or position of DailyO.in or the India Today Group. The writers are solely responsible for any claims arising out of the contents of this article.