The pattern of riots following all blasphemy accusations is hard to miss.

Riots broke out in Pakistan’s Sindh province on September 15 after a school principal from the minority Hindu community was booked on charges of blasphemy.

The protesters demanded the arrest of Notan Lal, owner and principal of Sindh Public School, who has been accused of making derogatory remarks against Prophet Muhammad. Abdul Aziz Rajput, a student’s father, is behind the accusation.

The protesters, it has been reported, damaged property, including the school where the incident took place and temples in the area. The violence forced the police to arrest Lal, who if found guilty, could face the death penalty. 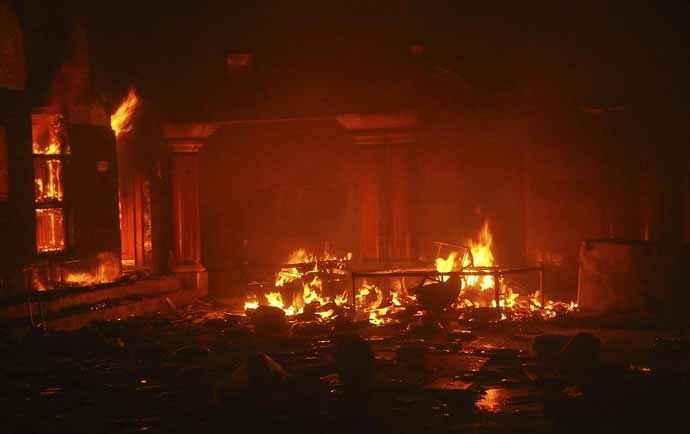 Blasphemy is such an inflammatory topic that even calls to reform the law have provoked violence. (Photo: Reuters)

Any member of the majority Muslim community implicating a member of the minority community in a blasphemy case is enough for the latter to be put behind bars in Pakistan, without even a proper investigation. A mere accusation is ground enough for punishment. Any opposition to the country's blasphemy laws is also considered blasphemy and hence can invite mounted trouble. Sindh province, where the attack took place, is home to most of Pakistan’s small Hindu community, which numbers about two million among a population of 180 million.

The pattern of riots following all blasphemy accusations in the neighbouring country is hard to miss. In most such cases, the properties owned by the accused are targeted. The topic is so inflammatory that even calls to reform the law have provoked violence.

In June, when a Pakistani doctor named Ramesh Kumar Malhi was accused of insulting Islam, riots followed. Malhi’s establishment was burnt down in the ensuing violence.

The most classic case of how blasphemy is used in Pakistan to silence and subjugate religious minorities into total submission through rioting was seen in the case of Asia Noreen Bibi. Violence occurred not just to demand that Asia Bibi be given death penalty, but also after she was acquitted. Thousands blocked roads in major cities and pelted stones at police personnel. Public property was set alight during the protests.

Saif Mulook, the lawyer representing Asia Bibi in the case, had to flee the country to save his life. Asia Bibi herself had to take refuge in Canada fearing that she would be killed in her own country.

As soon as the judgement acquitting Asia Bibi was pronounced, members of right-wing organisation Tehreek-e-Labbaik Pakistan (TLP) brought life to a grinding halt in parts of the country.

In less than two years, the TLP — or the Movement at the Service of the Prophet — became one of the most powerful groups in Pakistan. They demanded among other things that Asia Bibi be prevented from leaving the country.

TLP was the same party that had been releasing videos on social media, threatening to kill the judges in the case, and imploring its “soldiers” to prepare for the ultimate sacrifice.

In order to stop the violence from spreading, the Pakistani government had to broker a deal with TLP, under which the former was to ensure Asia Bibi would not leave the country and a review petition would be allowed against the first order.

In the 2018 Pakistan general elections, TLP emerged as the fifth largest party in terms of votes, winning 2.2 million votes out of the 40 million votes cast nationally. The group owes its phenomenal rise to the protests following the 2016 execution of Mumtaz Qadri, a commando of the Elite Police, who assassinated Punjab governor Salman Taseer, a man Qadri was tasked to protect, for advocating changes to Pakistan’s blasphemy law in 2011.

Qadri's hanging sparked massive protest demonstrations. Protesters blocked Faizabad Interchange by placing containers, trucks and other barriers, disconnecting the twin cities of Rawalpindi and Islamabad from the rest of the country. The Pakistan Armed Forces had to be called in to disperse the protesters. Tens of thousands of religious people attended Mumtaz Qadri's funeral, blocking several main roads leading to capital Islamabad and chanting, “Qadri, your sacrifice will be remembered.” The slogan of remembrance followed through. The assassin is hailed as a hero in Pakistan. Thousands of his supporters pay tribute to his grave-turned-shrine on his death anniversary every year.

Located on the outskirts of the capital city Islamabad, decorated by four white minarets to imitate Muhammad’s Mosque in Saudi Arabia, the shrine attracts a large number of devotees.

Pervez Ali Shah, the judge who sent Qadri to the gallows, had to flee the country following death threats.

Two months after Taseer’s assassination, Shahbaz Bhatti, a Christian, and Pakistan’s religious minorities minister, was also killed for speaking out against the blasphemy law.

But TLP is not solely responsible for this.

In 2013, Junaid Hafeez, a Fulbright Scholar and formerly a visiting faculty member at Bahauddin Zakariya University in Multan, was arrested for blasphemy over allegedly doctored printouts of ‘offensive’ materials that had been attributed to him. His first lawyer, Rashid Rehman, was shot dead in his office for simply taking up his case. Hafeez, meanwhile, is still languishing in jail. Junaid Hafeez has been in jail since 2013 over blasphemy allegations. (Photo: Reuters)

On March 11, 2013, the Supreme Court of Pakistan took note of an incident which occurred in Joseph Colony, Badami Bagh, Lahore on March 9, in which over 175 houses, a church including religious books, and all the belongings of the Christian community were burnt and torched by a mob over a blasphemy accusation of defiling Prophet Muhammad.

The incident reportedly began earlier that week as an argument between Sawan Masih, a sanitation worker, and his friend, a Muslim barber named Shahid Imran. Imran accused Masih of blasphemy. The very evening the news broke, Christians in Joseph Colony apprehended trouble and began leaving their houses.

Even as the laws pertaining to blasphemy have grown stronger, the aftermath of accusations is displayed outside the courtroom. Even proponents of the blasphemy law claim that angry mobs must be deterred from taking matters into their own hands.

How did blasphemy become such a deadly issue in Pakistan?

Like everything else in the subcontinent, blaming colonial powers solves half the maze.

When Lord Thomas Babington Macaulay drafted the Indian Penal Code of 1860, he incorporated religion into criminal law by introducing a blasphemy law, imported from the British common law with some additional provisions — for instance, even words uttered out loud could be deemed offensive. He also apparently saw the fallout of it. “There is, perhaps, no country in which the government has so much to apprehend from religious excitement among the people,” Macaulay warned.

Blasphemy law by itself, however, was hardly invoked in early 20th century. In their original, colonial-era form, the laws were relatively sensible. The British rulers of undivided India wanted to stop religious offence giving rise to rioting between Hindus and Muslims. The British made it a crime to disturb a religious assembly, trespass on burial grounds, insult religious beliefs and intentionally destroy or defile a place or an object of worship.

But the seeds of communal sentiments were sown much earlier by 'Quaid-i-Azam' Muhammad Ali Jinnah in 1929, in pre-Partition Lahore.

After a Punjabi Muslim carpenter Ilm-ud-din murdered Mahashe Rajpal, an Arya Samaji, for publishing the book Rangila Rasul, considered derogatory towards the Prophet by the Muslim community, Jinnah, a prominent lawyer back then, defended Ilm-ud-din saying he was very young at the time of the crime. Jinnah aruged that Ilm-ud-din's death sentence be commuted to life imprisonment.

The case was the first-ever blasphemy-related incident in the subcontinent; it was when the British added Section 295-A to the existing blasphemy law and set a trend for how blasphemy would come to be treated.

Though the court found him guilty and executed him, Ilm-ud-din is is remembered in Pakistan as 'Ghazi' (a surviving warrior) and 'Shaheed' (a martyr). Lahore’s Miani Sahib graveyard today houses a mausoleum of Ilm-ud-din.

After Pakistan became an independent country in 1947, the blasphemy laws were hardened and became focused on protecting Islam.

After the 1950 blasphemy riots, when Ahmadis were violently resisted by Jamaat-e-Islami and other religious groups, it became clear to the religious right that fighting in the name of Prophet’s honour made great political theatre.

The framework was later given a boost during the rule of former hardline Islamist dictator Zia-ul-Haq in the mid-80s. His military government passed a series of new statutes that included a provision for capital punishment in cases where the Prophet Muhammad was insulted. The stricter blasphemy laws were introduced through Sections 295-B and 295-C of the Pakistan Penal Code during Haq's dictatorial regime. It changed the nature of the 1860 law against ‘insulting religious feelings’, which have particularly affected non-Muslims of Pakistan and impacts the entire country.

Pakistan continues to burn in the name of religion and the hurt caused to religion. The blasphemy laws are acting as the fuel that the fire needs to not be extinguished. The riots are being staged to ensure total subjugation before the laws.

It is this mindset that Pakistan needs to worry about. Till this culture of hailing murderers as heroes is done away with, riots will follow blasphemy accusations in the country. Pakistan will continue to burn.

Also read: Why the global community must speak up for Pakistani doctor Ramesh Kumar Malhi

Post your comment
#Asia bibi, #Religious Intolerance, #Pakistan, #Blasphemy laws
The views and opinions expressed in this article are those of the authors and do not necessarily reflect the official policy or position of DailyO.in or the India Today Group. The writers are solely responsible for any claims arising out of the contents of this article.