Amid the mega surge in cases, Maharashtra entered a mini lockdown today and will stay locked up till May 1. But Maharashtra Chief Minister Uddhav Thackeray has said this ain't no lockdown (for now) but only break-the-chain restrictions. From 7 am to 8 pm, only essential services will function. What’s essential? Healthcare, banks, media, e-Commerce and fuel. There is no need for Maharashtrians to return to the kitchen, claiming cooking is therapeutic, because restaurants and hotels are allowed to deliver food and movement of maids and cooks from their homes to your homes is allowed too.

Across the country, Kumbh is allowed, Ramzan gatherings are allowed and elections rallies and roadshows are allowed without any reasonable or unreasonable restrictions. Classes 10 and 12 board exams, however, are not allowed. Class 10 exams have been cancelled, while class 12 boards will be held at a later date, which will be announced at a later date. Remember there are many vaccines on the block, but none for children. More on vaccines later.

For now, Uttar Pradesh CM Yogi Adityanath is in isolation where keeping him company is coronavirus. To get out of isolation, CM Yogi will have to defeat the virus. The CM, for now, seems down with the virus, but not defeated by it, as he is working from isolation. 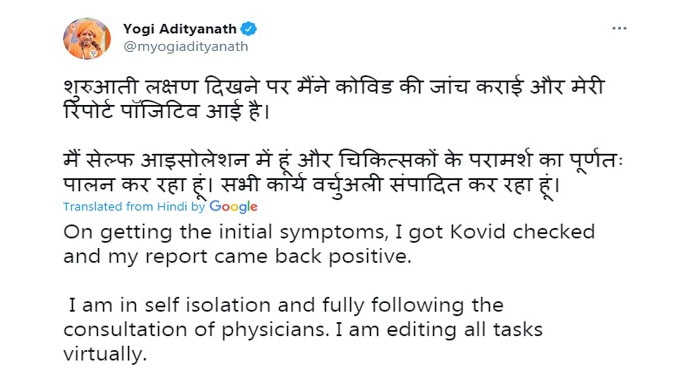 Going back to Maharashtra and vaccines, only 19.9 per cent of those over 45 years of age have been vaccinated. At this pace, Maharashtra is expected to take over 100 days to vaccinate all above 45 years. Not the same as collecting Rs 100 crore in a month. The man in NIA custody in the hafta vasooli racket, meanwhile, could have been planning to bump off two more people. Sachin Vaze’s plan reportedly was to kill the two and pin the blame for planting the explosives outside Mukesh Ambani’s house on them. That was a plan bound to fail because if you kill the suspects, investigators will look for suspects who could have killed 'the suspects'. The NIA investigation is looking into an "encounter angle" after a passport was found at Vaze’s residence.

NIA sources say Vaze allegedly intended to eliminate the holder of that passport along with another man and implicate them for planting the SUV containing the gelatin sticks outside Antilia.

What does Finance Minister Nirmala Sitharaman have to say about a country-wide lockdown? Sitharaman has told World Bank Group president David Malpass the government of India is not looking at imposing a lockdown on the scale of 2020 but is resorting to local containment. You can make claims now but the virus can come back and force you to present counter-claims to your own claims later. At the beginning of the second wave, Maharashtra had said there won’t be a need for a lockdown. It has already entered a phase of break-the-chain restrictions. The Maharashtra spike has, however, taken the focus away from the spike in Delhi. Since April 11, Delhi has overtaken Mumbai in terms of daily spike.

What about the spike in election-bound states? Election Commission has called for an all-party meeting on April 16, a day before polling for the fifth phase. They might say better late than never. We need to tell them about 'too late', which falls between late and never.

To tide over the spike, someone in Jaipur stole 32 vials, containing 320 doses, of Covaxin. The vials were in transit from the cold storage to the vaccine centre. A ‘missing vaccines’ complaint has been registered with the police. It is possible by the time police reach the vials, 320 people have taken their first dose. They can then go to jail fearlessly.

Bengal CM Mamata Banerjee finally reached the families of the Cooch Behar violence victims. Four people, you know, died in the firing by central forces on April 10. Mamata had earlier egged on people to gherao central forces in groups. She just forgot to tell them there could be consequences. The two incidents could be unrelated but each incident on its own deserves to be condemned.

Mamata’s party, meanwhile, was moved by Mamata’s image (thankfully not her painting). TMC tweeted the ‘moving image’ to tell the people of Cooch Behar that Bengal’s daughter is a very understanding person. No one can understand your pain better than Bengal’s daughter. Moving image from @MamataOfficial's visit to grieving families of Sitalkuchi genocide. pic.twitter.com/1CPRZlU8tI

Nobody understood casteism in India quite like BR Ambedkar. He also understood its remedies. The mention of remedies reminds us that Remdesivir, the government of India has said, is only for those on oxygen support. We wouldn’t have digressed if the digression wasn’t so important.

But it is also important to discuss Ambedkar, the chief architect of the Indian Constitution, today because today happens to be Ambedkar Jayanti. While Ambedkar gave us the Constitution, Sanskrit gave us the word jayanti. Jayanti is often mistaken for birthday but the Hindi for birthday is janmotsav, which reminds us that Vaccine Utsav ends today. Vaccinations against corona, however, will continue over several years beyond today. BR Ambedkar has called for a currency change every 10 years. (Photo: Wikimedia Commons)

Jayanti, the Word Of The Day, derives from the Sanskrit ‘jayanta’, which means victorious. The birth or death of great people is referred to as jayanti as a mark of honour and respect towards the contributions the great people made.

Ambedkar was a polymath who fought for the rights of the marginalised. The credit for giving place to ‘Ashok Chakra’ in the Indian Tricolour also goes to Ambedkar. But did you know that Ambedkar was the first proponent of demonetisation?

Yes, Ambedkar, who Nobel Prize winner Amartya Sen considers as his father in economics, said rupee should be changed every 10 years to tackle problems ranging from hoarding to black money to inflation. He wrote about it in his book Problems of Indian Rupee.

That will be all for the day from us but the virus has still not had enough so mask up.

#Mamata Banerjee, #Ambedkar jayanti, #Covid second wave, #Boardexams
The views and opinions expressed in this article are those of the authors and do not necessarily reflect the official policy or position of DailyO.in or the India Today Group. The writers are solely responsible for any claims arising out of the contents of this article.