Did the White soldiers really cannibalise Naga Labour Corps during World War I?

Historically speaking, consuming one's own species or cannibalism has been in existence among human species for centuries. Theorists and scholars have the tendency to categorise the nature of such existence in terms of geographical location, ethnicity, race, and culture.

Known as anthropophagy, the etymological origin of cannibalism is traced to the Spanish word "caníbales", used to denote a West Indies Tribe, Caribs, which practised cannibalism. Regarded as unacceptable by modern human behaviour and ethics, such practise is otherwise profoundly known till modern times.

To quote Earle, "extirpating this atrocious activity was thus a palpable benefit of Spanish rule, as colonial writers liked to point out. There is a substantial literature on the ways in which Europeans used accusations of cannibalism to justify colonisations and conquest; in 1503, for example, Queen Isabel rule that Amerindians guilty of cannibalism could legitimately be enslaved".

What literature and Orientalists fail to comprehend and analyse is the practice of cannibalism that took over the civilising white race during extremities of war and famine. Going by oral aver of many of the Tangkhul Naga Labour Corps who participated in the World War I, extremities of the war in terms of meat and food shortage on board the ships and steamers made the white soldiers to resort to cannibalism.

A century ago, the Tangkhul-Naga tribe along with other Naga tribes spread across the present Indian states of Manipur and Nagaland were practicing "head-hunting culture”, but the tribal war and head-hunting were based on the context of sagacity.

Head-hunting culture is often considered as primitive and feral, but even against such culture, the Tangkhul-Naga tribe did not practice cannibalism (mikhalatta kashai), making many of them to feel agitated at the thought of them being consumed by the white soldiers (Kora Raimi). 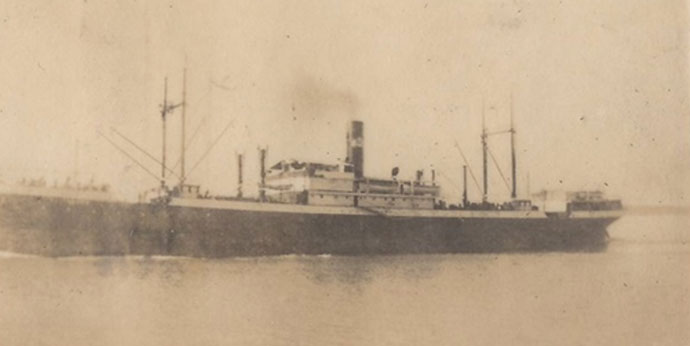 Young Tangkhuls labour corps after they returned from the War (1918).

In this regard, it can be stated that the Whites resort to eating the flesh of indigenous labour corps right after they die of sea sickness that comes in the form of typhoid, cholera, and scurvy.

While conversing with the son of one of the Tangkhul Naga Labour Corp men who participated as "Mate", he provided a narrative of how the labour corps who died during the sea journey were quickly wrapped up by the White soldiers to examine and record information in the ship mortuary, and reverberate the dead body to the unit leaders, "to be thrown into the sea". Initially, while disposing the dead bodies, the labour corps often detect them to be much heavier than they normally knew.

By mid-journey to France (through Mediterranean and Red Sea), the Tangkhul Naga Labour Corps therefore engaged in examining the covered corpse, where they encountered the leg of the death bodies tied down with metal (mari kanghui) to drown the bodies. Along with this understandable procedure, they, however, encountered the macabre action of human flesh (popularly extracted from thigh and arm regions) being extracted from the victim, which reportedly caused stir and hubbub among the tribe.

Concluding that the White soldiers engaged in eating human flesh, many of them hid their sickness whenever doctors came to inspect their health. Such terror encounter was in addition to the "sick labour corps who were thrown into the sea even when they were alive, in trepidation of the sea sickness spreading among the healthy inmates”.

Two men spoke woefully about how their grandfathers were thrown into the sea while they were still alive. One of the grandfather, a strong man from Shirui village, who was credited with possessing the capacity to carry heavy monolith in knitted bamboo tumpline (kashai) contracted cholera while coming home (India) from France.

Thrown into the sea when he was still alive, he chased the naval steamer for some time pleading, "Save me Comrades, I am still alive.” After the officers disallowed the labourers to bring him in, he finally threw his turban to the friends in the steamer to take it "to his loved ones at home" for remembrance and consolation.

Thus, the labour corps often struggle to hide their sickness for fear of being thrown into the sea or for fear of getting eaten by the Whites. Another oral aver in support of the White cannibal proposition also came from a woman, whose father-in-law (labour corps in 40th unit of the 22nd Manipur Labour Corps) often narrate to her of White soldiers’ cannibalism on board the ship. Here, she speaks about all the flesh extracted out of the death bodies, and allowing the labour corps to throw only the bones tied to metal and wrapped in blanket into the sea.

Written accounts of Kanrei Shaiza, Āpuk ĀpagaRairei Khare, France Khavā, 1917-18, shows that there were many ethnic races, whom the Tangkhul Labour Corps shared their cabins with.

In this regard, a group of grandchildren whom we interviewed speak of their grandparents often narrating the story of a particular Labour Corp named, Luita, who befriended some Africans on board the steamer. Luita was never seen again after he went with them to their cabin. He was assumed to have been "eaten" by them.

Taking the perspectives of anthropologist, Beth A Conklin, the practice of exocannibalism was common among some African tribes to quell rival tribe feud, or as Ruth Benedict would have explained it, cannibalism among the indigenous people can simply be understood in terms of cultural relativism.

Unlike such slanted theories, colonialist cannibalism or the White soldier cannibalism has simply been disregarded as fuelled rumours.

In the face of extreme survival-necessity and on the brink of food scarcity, it only becomes natural that people on-board the "ration-short" naval steamer resorted to cannibalism.

Given the nature of the travel in the sea for a long time, post-mortem dismemberment of bodies remain highly inapplicable; instead, the white soldiers could have resorted to eating the dead and exposed human flesh in the face of dire food requirements. William Seabrook, the American Traveller and Cannibal, famously claimed in 1931 that human flesh taste the same as veal.

Given such claims, no meat-eating labour corps and soldiers could have distinguished animal from human flesh, even if they were served such food during the leg of the journey.

Many historians and economists writing on the prevalence of human cannibalism during the 1929 economic depression and the Siege of Leningrad (World War II) have simply been dismissed to maintain ethical and civilising culture of the Whites.

However, such oral aver will eventually allow researchers to no longer regard  the White soldiers preying cannibalistically of the indigenous people as vapid.

Also read: 100 years on, a tribute to the Northeast India labour corps who fought the White War