How convenient for BJP, eh?

Despite the overwhelming amount of criticism that the BJP has received for trying to run a smear campaign on Varnika Kundu, they are still at it.

On August 5, Varnika Kundu, the daughter of IAS officer, was stalked through the streets of Chandigarh by Vikas Barala, the son of Haryana BJP president, and his friend Ashish Kumar. The two men followed her in a car, and tried to force her to open the door of her car. She called the police as she was being chased by the two men, and they were arrested on charges of drunk driving and stalking. Kundu then took to Facebook to share her ordeal.

Friends and family of Barala have already tried their hand at defaming Kundu. Some alleged she drinks. BJP’s state vice-president Ramveer Bhatti took over the mantle of the "victim-shaming uncle" as he told CNN-News18, "The girl should not have gone out at 12 in the night. Why was she driving so late in the night? The atmosphere is not right. We need to take care of ourselves."

Of course, all of it received near-universal criticism (but not from anyone in the BJP). In fact, even the photo’s contents were debunked by media watchdog website Alt-News. That did not, however, discourage the BJP and its cadre from continuing with their ill-conceived smear campaign.

Shaina Nana Chudasama, the treasurer, BJP Maharashtra and a national spokesperson for the party tweeted an unrelated photo of Kundu, tried to pass it off as a photo of her with the accused and compared her to women who have falsely accused men of rape. 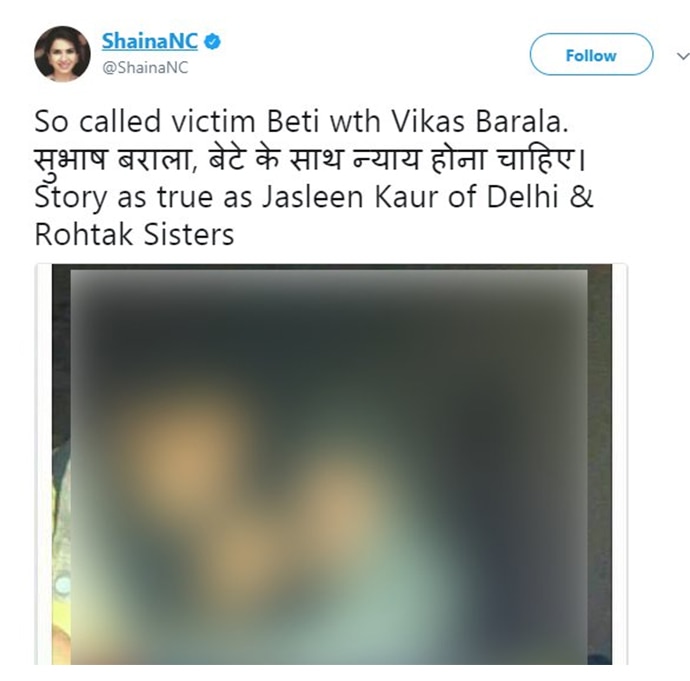 Later, when she was criticised for not only being factually incorrect, but also for being a cog in both India’s patriarchal ecosystem and a state machinery aimed at harassing anyone who tries to criticise the party, Chudasama deleted the tweet and gave the world the most unoriginal excuse: "account was allegedly hacked". After all, expecting the BJP or its cadres to apologise for something dishonest is a fool's hope.

Of course, no one seemed to buy her story.

Must be the same guy who hacked @Delhi_Airport recently. Cyber cell should deactivate these accounts until the malicious offender is found.

Minutes after being outed for her victim shaming tweet, BJP Nat Spokesperson miraculously gets back control of her 'hacked' account! https://t.co/PcOi1s3EZ0

It was either Arvind Kejriwal or OfficeOfRG. Name and shame the mischievous folks, Shaina. We are with you. https://t.co/kJnTEbOe6n

Believe mine can be hacked too. Dar lagta hai. Ma'm, can you please help with the procedure of recovery you did. thanks in advance. https://t.co/cgHZuGcXax

Men's rights activists everywhere love to harp on a few false rape cases that have taken place and love to equate it to all allegations of rape, sexual harassment and any kind of gendered crime. The BJP too seems to be going in that direction.

More importantly, gendered violence in India is often left unreported by the victims because they either don’t want to get caught up in red tape or do not believe the police can help. More than half the crimes in Mumbai and New Delhi go unreported, and the police in those cities refuse to register most complaints of sexual harassment, according to the human rights non-profit Commonwealth Human Rights Initiative.

But let us keep equating every case to the "Rohtak sisters" or Jasleen Kaur. Just to save a party member's son, the BJP is going well out of its way to defame a woman who refused to stay silent about sexual harassment. So much for "Beti Bachao", eh?

#Victim shaming, #BJP, #Vikas Barala, #Stalking
The views and opinions expressed in this article are those of the authors and do not necessarily reflect the official policy or position of DailyO.in or the India Today Group. The writers are solely responsible for any claims arising out of the contents of this article.