A walk along a Chennai beach made me realise that the sea is not a resource, it is a way of life.

I remember a walk near Chennai a few months ago.

The beach was deserted. It was late evening. The little stalls that buzz all day had shut down and the benches near the sea were deserted. The only sound was the noise of the sea grumbling to itself. Evenings are a time for reflection and an empty bench on the beach is the perfect invitation for it. 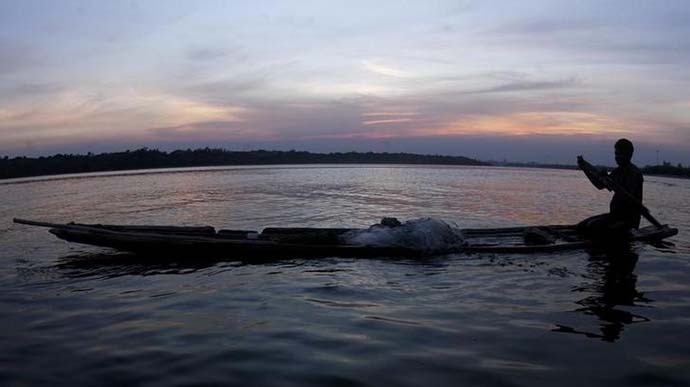 The sea is a black box that politics cannot enter. (Photo: Reuters)

I sat alone watching the sea in the evening. Its rage mimicked the rage inside me, its storminess capturing the sense of the inconsolable in me. Whenever I am searching for something, some world difficult to describe, I walk to this bench. I sat quietly most evenings with only stray dogs for company. They share what little I have to eat, and sit content. Today there was a stranger sitting on “my bench”. Something made me sit next to him.

I realised he was an old man, an infamous activist and journalist around the area. I had seen him lead demonstrations; sit at long hartals in front of the voiceless statues that marked the beach. He nodded to me and then sat quietly, content and within himself.

He looked like a Buddhist monk deep in contemplation. He asked me what my profession was. I told him I was interested in ecology. He smiled a smile full of irony and compassion, as if I had said something politically incorrect. The sea is an afterthought to all of us. (Photo: Reuters)

I asked him what he did.

He said he was, “a failed story teller and a failed Gandhian.”

I was surprised because I knew his name was revered in the coastal villages around the city.

I made bold to ask him what his name was.

He told me ‘Father Churchill’ and laughed with delight at the sheer irony of the christening.

‘Churchill’ for a Gandhian, I giggled.

There are deeper ironies and paradoxes, he said slyly.

He shot me with the next sentence.

He said “Well, ecologists like you talking about the sea.”

I was aghast for a minute. I could not quite figure out whether he was being candid or rude.

I asked him to explain.

He said, “It is strange how you landlocked minds talk of ecology. Whether it is a cyclone or the problem of fishing, you begin from land and move to sea. The sea is an afterthought to all of you. This is the tragedy of the coastline. It is being eaten up by regimes and none of you give it a thought. The pity is when you people think of the beach, you do not think of the sea as a continent. There is nothing as provincial as a landlocked mind.”

I was stunned. I had watched the ravages of the Kochi cyclone. I had been to Tuticorin where Sterlite is destroying ways of life. I knew he was saying something important. I asked him to explain. Sea is not a resource, it is a way of life (Photo: Reuters)

He said the tragedy of politics is that it centres around cities. The urban intellectual has no idea of the sea. Its cosmopolitanism terminates at the beach. The sea is a black box that politics and its imagination cannot enter.

It does not make a difference whether it is the DMK, Congress or BJP. They all have a landlocked sense of politics.

He said, “You put nuclear reactors on the coastline and call it progress. When fishermen object over the destroying of their livelihood, you dub them Christian and anti-national. The fisherman is a primitive, primordial savage. Politics and economics do not understand this.”

“The destruction of the coastline is a manmade one. I would put the Adanis on trial in an ecological Nuremberg. One talks of the boat people. When you cite the name, people think you are talking about Vietnamese refugees,” he said, adding that the struggle of the boat people is one of the great struggles today.

“It is a pity there is no Gandhi for the coastline, no Gandhian theory of the sea”.

He added wryly, Gandhi’s Porbander, and asked to imagine if he created new ashrams of thought to rethink the sea.

He continued, “Even your economists are tragic. The smarter they look, the more illiterate they turn out to be. They talk of the sea as a resource. The sea is a way of life. It is obscene to call it a resource, as if a mine to be stripped bare. The fisherman who says the sea is my mother sounds illiterate, but he understands ecology, mythology and economics better than the babus of ‘Delhi school’ or ‘London school’.” We need a Gandhian idea of the sea, as a real part of that document called the Constitution. (Photo: Reuters)

I felt he was unfair and requested an example. He said “The coastline is a commons. It is a celebration of how to include people. People here do not have jobs, they have livelihoods. A livelihood is work embedded in ecology. It is a pact with nature. Fishing is a livelihood. Livelihoods are always bundled together.”

“When you industrialise the coastline, when you destroy fishery, you destroy livelihoods. Livelihoods are for marginal people. They don’t make news. India is destroying livelihoods by hypothecating the coast line to the corporations”.

“I love the pathos and pomposity of the word ‘hypothecated’. I first saw the public use of the word on a little cobbler’s box in Calcutta. It said ‘Hypothecated to the Union Bank of India’. It was obscene, and yet captured the everydayness of Indian economics.”

He was talking almost to himself.

Sea people do not have jobs, they have livelihoods. (Photo: Reuters)

The fishing struggle, which combined liberation theology and Marxism, was our last Swadesi struggle.

It was a fight to save the local and the indigenous. Today swaraj will be a battle of coastlines. The coastline will see the new Gandhi. He smiled.

We need a Gandhi who moves from industrialisation to the sea. We need a Gandhian idea of the sea, as cosmos, as commons, as a real part of that document you call the Constitution. It is not the World Bank that these fishermen need today. It is a new idea, new politics about livelihoods. We need a new ethical imagination. I realised the power of what he was saying.

A Gandhi for the coastline. I could hear another empire crumbling.

Also read: A village on the verge of being lost to coastal erosion in Odisha must worry us all

#Chennai Floods, #Coastal erosion, #Environment, #Ecology
The views and opinions expressed in this article are those of the authors and do not necessarily reflect the official policy or position of DailyO.in or the India Today Group. The writers are solely responsible for any claims arising out of the contents of this article.