Digital blue, kermit green: The many shades of politics behind fashion’s ‘colours of the winter’ this year

Fashion has ditched the blues and greys for brighter — but not cheerier — colours in this winter of discontent.

When you think of winter fashion, what’s the first image that comes to mind? Long coats, boots, beanies, puffer jackets. Mostly in shades of dark blue, grey, black, the occasional tan — and the rather alarming yellow — making an appearance in leather jackets and trench coats.

In India, the job of adding pops of colour is left to desi shawls, stoles and knitwear.

However, this year, at almost all the top-billed fashion weeks, certain colours dominated. None of these were what we usually associate with winter wear.

According to Vogue, the colours include sapphire yellow, cherry red, digital blue (the colour of social media), fuchsia pink and orange. Even brown came in a brighter shade of whiskey brown. At the London Fashion Week, the colours that made a mark were pea green, tangerine, butter yellow and fire engine red.

So, what has led to winter fashion turning over a new leaf this time — a Kermit green leaf, not the olive green usually associated with this season?

The answer to that lies in politics, economy, and the #MeToo movement centre-staging conversations around sexual harassment, which, even as they gave women a voice, also established how disturbingly widespread and entrenched patriarchy and rape culture are.

We live in a time when societies are getting ever-more polarised, hate and intolerance are on the rise — fueled by world leaders, no less — and everyone, irrespective of race, nationality, religion, gender and privilege, is feeling a little more uncertain about their place in the world. Far from living in a bubble, fashion has obviously reacted to — and rebelled against — the all-pervasive greyness.

But there is more to this than just splashing brightness onto a depressed world.

When seen along with some other trends spotted at international runways — a penchant for gloss, but in synthetic, unconventional fabrics, such as vinyl, latex and plastic; the use of metallic hues and large sequins; the themes of #MeToo and #TimesUp writ large over designs — these colours become more than attempts at spreading cheer.

These are the colours of protest — loud and bright, in-your-face, impossible to ignore, but confident, glamourous, sure of themselves.

Women — not girls — making themselves seen and heard, in a world still learning to accept them. With dignity. And flair. 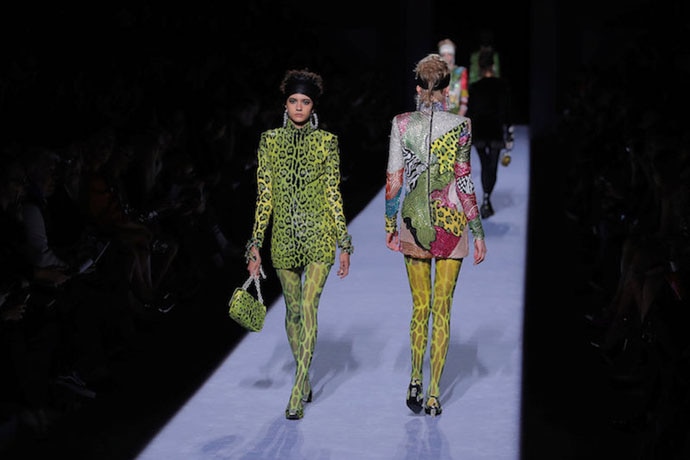 Fashion in the age of #MeToo: Bright, impossible to miss — and covered from head to toe. (Photo: Reuters)

According to Vogue: "Numerous designers discussed the notion of “protection”… many more discussed the idea of clothes as “armour”".

Says Marie Claire: “‘Protection’ was the buzzword bandied around during the shows — a sense of clothes as urban armour, whether you’re stalking the mean streets, or just battling the elements.”

These are women not looking at men to protect them, but emerging “armoured” from their own dressing rooms — the space traditionally associated with “pretty-fying” is now about deciding how much of yourself you are willing to expose to and share with the world, as you layer up with sweaters, jackets, scarves, headgear.

Also popular were clothes with graffiti on them, with slogans such as “Equality not Minority” spotted at the London Fashion Week.

The message is clear — we are wearing our protests and our politics on our sleeves, fashionably, glamourously so, the street and the ramp merging as theatres of protest, merging and mainstreaming both in the process.

If 2017 was all about millennial pink — representing a “kind of ironic prettiness, or post-prettiness”, which was a “way to be pretty while retaining your intellectual detachment” — this year has moved beyond pretty, and definitely beyond detachment.

It’s about being political, being actively, passionately engaged, and being very visible while doing these things — but all on your own terms.

Also read: Why I think the most feminist outfit ever is a flirty, flowing dress, with pockets

##MeToo, #Millenial pink, #New york fashion week, #London fashion week
The views and opinions expressed in this article are those of the authors and do not necessarily reflect the official policy or position of DailyO.in or the India Today Group. The writers are solely responsible for any claims arising out of the contents of this article.