DailyOh! Mouthwash to kill coronavirus, to why Nayanthara turned down SRK's Chennai Express

Did you brush your teeth this morning? And did you use a mouthwash after? We don’t mean to embarrass you by asking such personal questions, but just want to ask you to keep up the hygienic habits to keep Covid at bay. According to research by the scientists at Cardiff University, UK, mouthwash can kill coronavirus within 30 seconds in a lab.

“During a 30-second exposure, two rinses containing cetylpyridinium chloride and a third with ethanol/ethyl lauroyl arginate eliminated live virus,” said one of the scientists who was a part of the study. Now, it is natural for you to wonder if the mouthwash that can kill the virus in the lab, can also kill the virus in the body. Unfortunately, since that requires the mouthwash reaching the lungs, which is not possible in the natural course, it is not yet clear whether mouthwash can be used for the treatment of Covid-19. Talking of eliminating coronavirus brings us to the vaccine. In some good news on that front, the vaccine developed by Sinovac — CoronaVac — has successfully developed an immune response among volunteers in the preliminary trials. So we now have the option of CoronaVac besides the candidates from Pfizer, Moderna and also Russia. Incidentally, Pfizer, Moderna and Russia have said that their coronavirus vaccine candidates are more than 90 per cent effective. But as you know, there is a lot of difference between saying and being.

The Indian government is in talks with US-based biotech giant Moderna, Pfizer, Serum Institute, Bharat Biotech and Zydus Cadila over the progress of the clinical trials of each of the vaccine candidates and where their vaccines stand in terms safety, immunogenicity and efficacy, and regulatory approvals. Once the standards are met and the bar is reached, it is only a matter of time before you go to the hospital to get a shot. But wait. There is many a slip between the cup and the lip, and the coffee, err... we mean the vaccine, is not even out yet. The coronavirus vaccine developed by Sinovac has successfully developed an immune response among volunteers in the preliminary trials. (Photo: Reuters)

Speaking of coffee and vaccine and cup and the lip, there is one drink we have to mention here. And that is the humble Kadha that has pretty much replaced all your fancy cocktails and aperitifs as the Drink of the Year. If you need a soul and body warmer that boosts your immunity, check out our recipe for a steaming cup of Kadha, which is our recommendation for the day.

Coming back to Covid tests, the administration of Gautam Buddh Nagar (Noida, in common parlance) in Uttar Pradesh, that is adjoining the national capital Delhi, has started random Covid-19 testing of Delhi to Noida commuters from today. This comes in line with the increase in the number of coronavirus cases in Delhi and spreading in Noida. If you are the one commuting between Delhi and Noida, fret not. The authorities have assured that there will be no restrictions on the free movement of people between Noida and Delhi.

Twitter, meanwhile, has apologised to the Indian government today for showing Leh and Ladakh as part of China. Jack Dorsey's team has asked for time till November 30 to rectify the error.

December 16 is a date you need to keep in mind if you hold an account with the Lakshmi Vilas Bank (LVB). The Reserve Bank of India (RBI) has announced that a moratorium has been imposed by the finance ministry on troubled lender LVB till December 16. The customers of the bank can withdraw only Rs 25,000 per account per month for now, till the moratorium lasts. A moratorium has been imposed on Lakshmi Vilas Bank and cash withdrawals have been capped at Rs 25,000. (Photo: PTI)

So what is a moratorium? Our Word of the Day, moratorium, means a legal authorisation to debtors to postpone payment. The other meaning of the word is a temporary prohibition of an activity. It comes from the Late Latin word moratorius, which means ‘delaying’, derived from morari or mora which means ‘to delay’. Interestingly, the word also has Sanskrit and Irish roots. In Sanskrit, the word ‘amurchat’ means ‘to congeal’ or ‘solidify’. In Old Irish, maraid means ‘to last’ or ‘remain’. Both are considered to be the roots of the word moratorium.

The RBI has announced a draft scheme for amalgamation of Lakshmi Vilas Bank and DBS Bank India (which is a wholly-owned subsidiary of DBS Bank Ltd, Singapore). If the scheme is approved, Singapore’s DBS Bank will inject Rs 2,500 crore into DBS Bank India. However, for now, following the RBI’s announcement, the shares of the bank have tanked and were down nearly 20 per cent today.

In some more not-so-good news from today, BJP leader Khushbu Sundar met with a road accident. She later tweeted, "I am back home safe. No injury except left shoulder pain, which banged against the door, an impact of the hit. Want to thank each n every one of you for sending me so many messages of good will. Your love n support gives me the strength to walk n talk the path n succeed. (sic)" 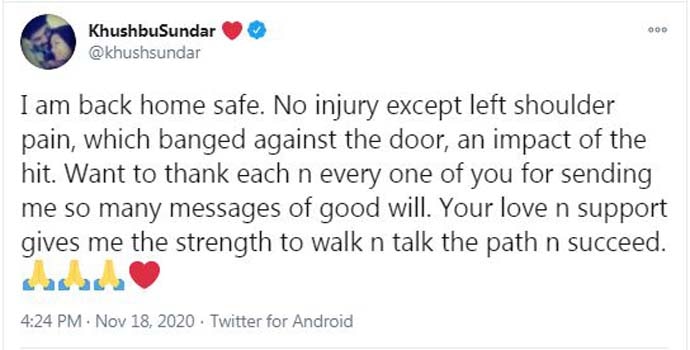 While this was midweek gloom, let us take you to some midweek glam. The glam girl and Lady Superstar of Kollywood — Nayanthara — turns a year older today. While beau Vignesh Shivan very cutely wished the birthday girl on Instagram, the makers of her upcoming film Netrikann released the film's teaser today as a birthday gift to Nayanthara.

Born Diana Mariam Kurian, Nayanthara has acted with the who’s who of the Tamil, Malayalam and Telugu film industry. However, did you know that she once turned down an offer to share the screen and shake a leg with Shah Rukh Khan? According to the buzz, she was reportedly offered a dance number in Rohit Shetty’s Chennai Express (2013). However, the actress turned it down. Now, while one reason is that she is very particular about not doing any raunchy dance numbers, the other reason is that the particular dance number in Chennai Express was supposed to be choreographed by her ex, Prabhu Deva. The two were in a relationship in 2010 and were reportedly set to tie the knot. However, Prabhu Deva’s wife Ramlath a.k.a Latha threatened to go on a hunger strike and several organisations burnt effigies of Nayanthara, who then, in 2012, ended her relationship with the dance god of Kollywood.

But as they say, all is well that ends well. Nayanthara found love again in Vignesh Shivan, since they worked together on Naanum Rowdy Dhaan (2015). And going by his Instagram handle, he seems smitten by her. The birthday girl, however, is a private person and is not present on any of the social media platforms. Here's Nayanthara in one of her famous numbers.

The power couple Shah Rukh and Gauri Khan have opened the doors to their house in the posh and upmarket South Delhi neighbourhood of Panchsheel Park. They recently partnered with Airbnb to welcome people like us to their home, through a contest.

The winner can bring along one guest, and the two will get a one-night stay on February 13, 2021, at Khan’s Delhi home. Talk of the perfect Valentine's gift! If you want to know more about what else is in store besides the stay, you can read all about it here.

We will leave you with that midweek cheer and be back tomorrow with a lot more.

#Shahrukh Khan, #Nayanthara, #Lakshmi vilas bank, #Covidvaccine
The views and opinions expressed in this article are those of the authors and do not necessarily reflect the official policy or position of DailyO.in or the India Today Group. The writers are solely responsible for any claims arising out of the contents of this article.