DailyOh! What WHO’s approval for Pfizer vaccine means, to the monolith in Gujarat

Poorer countries may soon get access to the Pfizer shot that is already available in Europe and parts of the US.

If you live in north India and had to wake up early morning to top yourself with an extra layer of the blanket before dozing off again, blame who else but the cold. In Delhi-NCR, the temperature plummeted to 1.1 degree Celsius and the fog formed an envelope, giving the region its coldest morning in 15 years.

#WATCH Dense fog, reduced visibility witnessed in Delhi on the first day of the new year; visuals from Mundka pic.twitter.com/IkgMdUi7is

Having partied hard and slept post the party with that extra layer of blanket, you may have missed out on the news that the World Health Organisation (WHO) has approved the Pfizer-BioNTech coronavirus vaccine for emergency use. Why is this important? WHO has approved the Pfizer-BioNTech coronavirus vaccine for emergency use. (Photo: Reuters)

Because WHO’s approval means poorer countries may soon get access to the shot that is already available in Europe and parts of the US. The thing is that every country that has a drug regulator will depend on the regulator for regulatory clearance. But not all countries have robust systems to carry out trials and decide if a vaccine can be used. Such countries can rely on WHO’s approval. Till the vaccine comes, we can rely on the mask.

How close are we to dropping the mask and getting powered by the vaccine? Union Health Ministry today reviewed the dry run preparations of the vaccination drive that will happen tomorrow. If the dry spell is here, the wet spell may not be too far behind.

But guess what has already arrived? The monolith. Yes, the same one the likes of which have appeared and vanished in different parts of the world since November. The monolith has appeared in a garden in Ahmedabad city, Gujarat. If you are in Ahmedabad, you can go see it. But if you are in some other India city, no point going to see it because it may have vanished by the time you reach.

We can’t chase the monolith so let’s chase its meaning. Monolith, the Word Of The Day, comes from the Greek word monolithos, where monos means ‘single’ and lithos means ‘stone’. Monolith is basically a single stone but the word applies to people also, actually a group of people. This is when a group of people are thought of as being all the same. No two people are the same but can have many similarities. But we can use the word monolith for people when we want to study them as one group. The mysterious monolith, which has been appearing and disappearing across the world, has now appeared in Gujarat. (Photo: PTI)

Let’s not study anyone or anything on January 1. Today is the day for celebrations so let’s talk about how different people celebrate the day differently. In Mexico, Bolivia, Brazil and other South American countries, people hide the secret of their fortunes for the year ahead in their underpants, rather colourful underpants. So, those who want to find love go for red underwear on January 1 and those who want wealth go for yellow. And those who want nothing more than peace go for white. That is what people in South America do and there is no legal sanction on people in India to try the same.

People in the Philippines, however, go all round because round represents coins. Now, you may not want to earn in coins but remember there are gold coins too. Think big. Act round. So Filipinos go as round as possible like drinking in round glasses and carrying things are round. They even eat things that are round in shape. Again, there is no sanction against trying the same in India. To begin with, you can try a round almond cake. We can help with the recipe.

But guess how a Pakistani national decided to celebrate the New Year? Police in Pakistan’s Peshawar arrested a young man on New Year’s eve because he was wearing a costume mask to scare people. 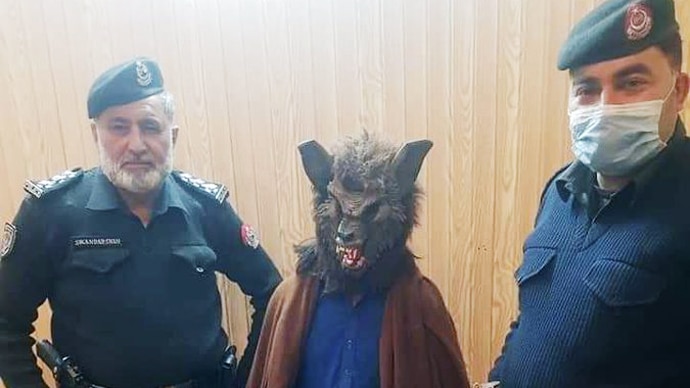 The Pakistani man who wore a costume mask to scare people in police custody. (Photo: Twitter/@omar_quraishi)

We have nothing to fear Pakistan, thanks to Indian Army guarding our borders. Talking about the army, Major General Gautam Chauhan has taken charge as the first Additional Director General Human Rights in the Indian Army. The human rights cell will be the nodal point to examine any human rights violation reports.

Former J&K Chief Minister Mehbooba Mufti, meanwhile, has written to Lieutenant Governor Manoj Sinha asking for the bodies of the three youth killed in an encounter in Srinagar. The Army and J&K Police have said the three were militants but the families of the three have said they had nothing to do with militancy. Now, bodies of militants are not handed over to their families in J&K because it has triggered protests in the past. So, such bodies are given silent burials.

From Kashmir Valley, let’s head to Dzuko Valley on the Manipur-Nagaland border. A fire broke out on the Nagaland side of Dzuko on December 29 and has since crossed over to Manipur. Union Home Minister Amit Shah today took stock of the situation and promised help to contain it. Fire is more difficult to contain than coronavirus because masks can’t stop it.

So, the fire has reached from Nagaland to Manipur but guess where the GST collection has reached. Rs 1.15 lakh crore. In fact, the revenues for the month of December 2020 are 12 per cent higher than the GST revenues in the same month in 2019.

So things are looking up for the economy. On that positive note, we will say bye to you for today and tomorrow and the day after tomorrow.

Have a very happy New Year and a safe one too.

Also read: Has Chirag Paswan been able to retain the political legacy of Ram Vilas Paswan?

#Happy New Year, #Pfizer, #Covid vaccine, #Coronavirusvaccine
The views and opinions expressed in this article are those of the authors and do not necessarily reflect the official policy or position of DailyO.in or the India Today Group. The writers are solely responsible for any claims arising out of the contents of this article.