Rural India needs to be protected from the community spread of Covid-19 as our villages are the primary engine of the economy in these trying times.

After nearly three months of Covid-19 sweeping the globe, the only prediction one can make about the pandemic is that nothing can be predicted with any degree of certainty. This applies not just to the clinical dimensions of the virus but also its socio-economic ramifications, which are likely to be many. Every newspaper across the globe and leading thought leaders have been trying to read the tea leaves for a sneak preview of the post-Covid world. But much of it falls between the realms of abstract and science fiction.

Let us start with the medical aspects first. Not surprisingly, there is no visibility on the timeline of a vaccine. Views on the efficacy of medicines, either as prophylaxis or treatment, are mired in controversy. Even renowned journals like The Lancet can be caught off-guard as in the case of the dubious hydroxychloroquine study that had to be retracted. The World Health Organization (WHO) changes its advisories more frequently than the US President changes his ties. We are still far from clear about the need and efficacy of wearing masks.

We still do not know how the virus spreads –through contact, from surfaces and now one hears it could even be through the air! All celebrations of early success in containing the spread have been short-lived with a new burst of cases. Chief ministers who went on a PR drive had to bite the dust in no time as the on-ground reality surfaced.

Even China is reported to have a new wave of cases in provinces that were earlier mysteriously insulated, albeit attributed to being “imported” by infected travellers. The opinion is still divided about the need to isolate asymptomatic patients who have tested positive. While there is a huge clamour for increasing the testing rates, the tests cannot be totally relied upon.

Despite these open questions, we went ahead with Unlock 1.0. The decision was apparently guided more by economic compulsions than the pandemic situation on the ground. While we drew comfort from the fact that the rate of spread of infection in India was not exponential, but linear was far from flat. With a higher population base, despite the number of days for taken for doubling of infection increasing progressively, the absolute number of cases continued to swell alarmingly. The spiralling statistics fuelled conjectures of community spread and rumours about the suppression of mortality numbers. 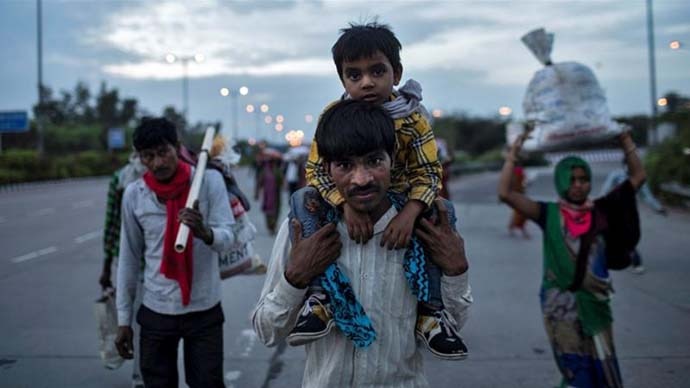 It would be difficult to woo migrat workers again to places from where they left in trauma. (Photo: Reuters)

Although it raised the anxiety quotient, there was no demand for prolonging the lockdown. Some chief ministers dithered. But sensing that public patience was wearing thin, they banished the thought of further extension. Tamil Nadu has, so far, been the lone exception to reimpose total lockdown in Chennai and parts of three adjacent districts. But one hopes it is an exception and will not trigger a reverse trend.

The cause of widespread lockdown fatigue was not mass claustrophobia. It was the mounting nervousness of job loss and unemployment. Businessmen were fast running out of cash and were afraid of imminent bankruptcy. Statistics of high recovery rates and anecdotal accounts of how people had come out of home quarantine was beginning to dispel the all-pervading atmosphere of gloom and doom. But, this was soon nullified by reports of cities running out of hospital beds and shortage of testing kits and lifesaving equipment such as ventilators. Ghastly tales of mass cremations and cemeteries running out of space reinjected the fear factor.

The angst, understandably, was rising against the government. There was a widespread feeling of the state not having done enough of capacity building during the lockdown to protect lives and livelihood. As the silent majority ran around for treatment, the rich and the powerful realised money and influence were not enough to ensure comfort in the Covid-19 crisis. This was a great leveller. So, even the affluent turned “vocal for local” in a negative sense – criticising the state governments on administrative failure in managing the emergency. Yet, common folks, not having an option, were willing to brave the odds of contracting infection were cramming into public transport, forgetting social distancing norms, to report for work once offices started to reopen.

This phenomenon challenges the theory of “fear psychosis” gripping the nation, which is popular among a set of glib commentators and gen-next scions of business families. The immunity factor of Indians may be a matter of debate, but the will to live is deeply ingrained in our genes. Thus, with reasonable assurance of healthcare back up, it would be safe to assume a vast majority of people would be ready to return to work.

After a near paralysis of the economy since the last week of March 2020, most people expected a total washout in May and June. However, after the first round of lockdown relaxation in the latter half of April, quite a few industries have surprised by a better-than-expected recovery in May 2020. Record sales of fertilisers was seen. Cement clocked 70 to 80 per cent of normal sales. Power consumption started to pick up after months of decline. By June, digital payments in retail, toll collections on highways, and even exports started showing recovery.

The green shoots, if it may be called, were literally appearing in the agricultural fields of rural India on the back of a good harvest in most states. Another factor that appeared to drive economic activity in rural India was the returning migrants. Some of them came back with the savings from earlier months (the usual practice when they come home in the harvesting and sowing season). With state governments kickstarting the stalled mega-infrastructure projects and development work under schemes like MNREGA and PMAY, many of them are beginning to find employment in and around their native places.

State governments that are not bogged down in fighting Covid-19 in big cities – which by default create more noise and grab more attention – are able to focus on improving the facilities in the districts. If the statistics can be trusted, even with large buckets of salt, the situation in other India a.k.a ‘Bharat’ appears to be better than urban big cities of urban India so far.

Meanwhile, the more ‘developed’ states are facing an acute scarcity of labour. They are afraid this would not only constrain restarting the economy but also affect urban services of public transport, utilities and municipalities – especially during monsoons.

Rumour has it that touts and contractors are trawling the hinterlands to bring labour back to the user states by offering a handsome increase in wages. But alas! Human beings, even the economically underprivileged, don’t live for bread alone. It would be difficult to woo them again to places from where they left in trauma unless they are assured that conditions have improved substantially and medical care will be available when they need it.

In this digital age, news travels far and wide on smartphones faster than television or newspapers. So, tales of the rich, famous, influential and politically connected having to run from pillar to post for treatment is not unknown to those who returned from the cities. They also know that once they are back to the labourers' hutments and chawls in cities, they will also not have the luxury of “home quarantine” – that city-slickers may not realise – is available to them in villages.

In cities, trendspotters and futurists foresee a galloping shift to work from home, contactless deliveries and e-commerce. But do they pause to think what percentage of India’s working population can operate from homes? Size of tenements and the problem of urban housing cannot be solved with a magic wand. People have to come out of homes. But family members before sending out their sons, daughters and spouses to work have to feel secure that they will come back safe and will have access to medical treatment in case of need.

Massive scaling up Covid-care facilities and rapid mobilisation of additional healthcare workers on a war footing is the only way to restart the economy. Otherwise, to expect people to gamble on their life for the sake of livelihood would be like sending soldiers to war without arms. Mere rhetoric of ‘jaan bhi, jahaan bhi’ or ‘we have to live with Corona’ will not bring out in full force.

Till that happens, we must take additional care to protect our villages. Insulating rural India from community spread of Corona is imperative as it remains not only the country’s granary but also the primary engine of the economy in these trying times.

Also read: Why there is hope in Covid-19 numbers for India

#Migrant labourers, #Rural India, #Coronavirus in india, #Covid19
The views and opinions expressed in this article are those of the authors and do not necessarily reflect the official policy or position of DailyO.in or the India Today Group. The writers are solely responsible for any claims arising out of the contents of this article.