How Covid made digital media the new normal

The real casualty of the Covid seems to be the newspaper. A sense of tragedy is lost in the celebration of the technological.

The Corona epidemic becomes an intensive time to watch people. One learns interesting things about how people perceive themselves and the world around them. One of them recently told me that for him, “the empirical was banal and dailyness was repetitive. Even the empirical had to be read at the level of the symbolic and the institutional.”

I was intrigued, my friend chuckled on the phone. He said, “Think for a minute. It’s not people who are the only objects of the Corona and its havoc. Its focus is on perceptions and institutions.” The biggest victim of the Corona is the State. No critic has exposed the ineptness of the State as effectively as the Corona. The best criticism of Uddhav Thackeray and Tamil Nadu’s Palaniswami is Covid-19.

My friend added, “this will be a new kind of social meteorology indicating the health of institutions.” My friend claimed that the test of Corporate Social Responsibility (CSR) was Covid, and the corporations turned out to be bereft of ideas, except for a pretentious notion of housework which was indifferent to gender. He rambled on exploring his thesis.

He stopped and suddenly asked me, “As a sociologist tell me, where is the biggest change?” I mumbled tiredly, “the city”. He laughed triumphantly. He said, “No. It is the newspaper.” He gave me a lecture, a mini-seminar, which I shall now develop. The newspaper is no longer about the news. “Today, India is being subject to virus epidemics, war on borders, locust invasions as pestilence, and cyclones on the coastline. The gas leaks would have been the fifth, but they were minor, modest next to Bhopal.”

My friend said it is the time of catastrophe, yet the news has become so banal. It is banalised by numbers. If a policy uses numbers in a way that destroys the beauty of mathematics, numbers expressed by way of survey and the social trend becomes an adjunct to the State, in fact, a willing adjutant of policy. The newspapers are otherwise silent. They report everything like extensions of officialdom. They pretend of normalcy that does not exist. They sound like they’re in the grip of Thanatos, oscillating between the obituary and the pathologist report. Death and devastation are their concern, but the banality of both is obvious.

The news sounds like a collection of social work handouts. This is sad because the newspaper was the greatest celebration of democracy we had. India literally voted through print. He added, “In recent times, the only sense of mourning, laughter and life was when two film stars died. Bollywood rescued news. The reports on Irrfan Khan and Sushant Singh Rajput made news come alive.” They were treated as model dramas, a source of mourning and debate. In this context, a person died. There was mourning, not a litany of body counts. The newspaper became itself. 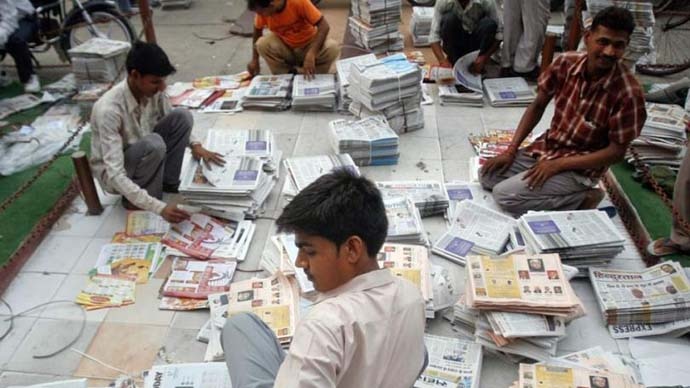 In the coming years, we will mourn the decline of the newspaper. A way of life is being lost, and the Covid has announced it. (File photo: Reuters)

Beyond the cases of Rajput and Irrfan, the news of the everyday is lifeless. You could substitute reports and hardly recognise the difference. Analysts I talked to brought a further twist to the argument. They listed that the change is not political but technological. “Newspapers”, they claimed, “were mourning the death of print and announcing the real birth of the digital.”

“Covid”, they claimed, “has announced the birth of the digital era. The virus did not cause it, it merely formalised it. The new society has to be online.” I admit, as an old addict of print, that I was shocked. I only get up in the morning because of filter coffee and a sheaf of newspapers. Print defined a sense of the social, and now analysts were declaring life begins online.

One of the first things that I keep encountering is the frequent use of the word “the new normal”. The government is calling for a return to normalcy when the virus has still got two months to peaking point. What has arrived is social media. What has been announced is the web in air. The web in the air is the new normalcy, the acceptable epidemic of academic and corporate life. One feels like a dinosaur if one has not performed this rite of passage to the new post-normal world.

The university has declared the post-normalcy by announcing seminars and digital classes. There is no question of transition or training. Look at the announcements of the Vice Chancellors. One says that the distinction between print and digital is over. Another literally adds, “by becoming digital we are”. Even the advertisements are signalling a transition to a different way of life. Corporate dons have announced the age of artificial intelligence. It is as if the virus, while not breaking social stereotypes, has cleared the mind for new technology like a tabula rasa. The newspaper as an organism senses this, feeling its inadequacy before the social media. In the coming years, what we might mourn is the decline of the newspaper. Housewives will miss it as they want it to line the shelves. Old men will not read it in the parks. A way of life is being lost, the Covid has announced it. The real casualty of the Covid seems to be the newspaper. A sense of tragedy is lost in the celebration of the technological.

Also read: How the Covid story must be retold

#Digital world, #Newspaper, #Coronavirus pandemic, #Covid19
The views and opinions expressed in this article are those of the authors and do not necessarily reflect the official policy or position of DailyO.in or the India Today Group. The writers are solely responsible for any claims arising out of the contents of this article.