The World Health Organistation (WHO) in a report has said that Covid has killed 47.4 lakh people in India in 2020 and 2021, ten times the official death toll. India, however, has refuted the WHO's claims and called the methodology questionable.

After a World Health Organization (WHO) report on Thursday stated that Covid-19 led to the death of 4.7 million (47 lakh) people in India, the government has raised questions over the validity of the estimate model used by the international public health body.

The WHO's Covid death estimates in India are 10 times the official figures and almost one third of coronavirus deaths globally.

WHO says that the Covid pandemic has caused the deaths of 14.9 million (1 crore, 49 lakh) people around the world, which is three times the official number.

The Indian government has said that the validity and robustness of the models used and methodology of data collection are questionable, reported India Today.

Excess #COVID Mortality Estimates by @WHO: A rejoinder#India strongly objects to use of mathematical models for projecting excess mortality estimates in view of availability of authentic datahttps://t.co/u51mfvzH6t pic.twitter.com/OHP6e32W6y

We take a look at the official Covid death toll in India, the WHO estimates and why there are so many discrepancies in the numbers.

According to the Ministry of Health and Family Welfare (MoHFW), there have been 43,094,938 infections and 524,002 Covid-related deaths reported in India since the pandemic began.

The health ministry has said that more than 70 per cent of the deaths occurred due to comorbidities.

India’s official death toll passed 500,000 in February first week this year when infections due to Covid variant Omicron were on a rise.

India took 217 days to reach 5 lakh deaths from 4 lakh recorded in July last year. India was hit by a devastating second wave in April-May last year. The country’s death toll had crossed three lakh-mark on May 23 and two lakh-mark on April 27. The death toll went past one lakh on October 2, 2020, reported PTI.

According to the WHO, there were 14.9 million excess deaths associated with Covid by the end of 2021, which included 4.7 million (47 lakh) from India.

The WHO report said that almost half of the deaths that until now had not been counted were in India. The report suggests that 4.7 million people died there as a result of the pandemic, mainly during a huge surge in May and June 2021.

The total number of deaths associated with #COVID19 worldwide from 2020-2021 may be closer to 14.9 million: New estimates by WHO & @UNDESA.That’s 9.5 million more deaths than reported https://t.co/qDvaA6t5KZ #HealthData pic.twitter.com/ZjABJzlgiZ

In a technical note for India, WHO said the "estimates may not be regarded as the national statistics officially produced by India due to differences arising from the data and methods used by WHO."

The WHO said that the numbers are far higher than the official tally because of deaths that were missed in countries without adequate reporting. Even pre-pandemic, around 6 in 10 deaths around the world were not registered, WHO said.

As per the WHO report, excess mortality is calculated as “the difference between the number of deaths that have occurred and the number that would be expected in the absence of the pandemic based on data from earlier years." TUSSLE BETWEEN WHO AND INDIAN GOVT

A top health ministry source has called the WHO's finding that 4.7 million people had died in India directly due to Covid or due to the pandemic’s impact on health systems and society "mischievous", reported India Today.

“The data was presented in advance to WHO. It could have analysed the data instead of adding a footnote at the bottom. The WHO’s action was mischievous,” the official said.

Prabhat Jha, a member of the WHO team that arrived at the numbers, told NDTV that he fully endorsed the WHO data and that it was along the lines of other independent surveys and data released by the government. "I accept these numbers and in fact, the Indian government's release of the Civil Registration System Data of 2020 corroborates the WHO estimates for 2020," Jha said.

Head of India's Covid task force VK Paul expressed disappointment over the WHO report, saying that the global health body had chosen to use the "one-size-fits-all approach".

"You may apply that model where the systems are poor. But to apply assumptions, based on a sub-set of states, based on reports that come from the websites and media reports and then you come out with an exorbitant number is not tenable. We are disappointed by what WHO has done," Paul told India Today. 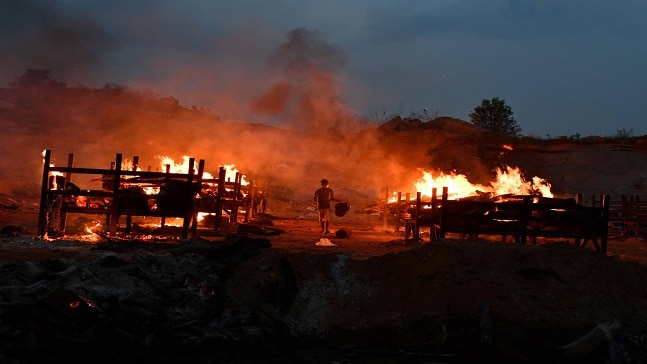 WILL WE EVER KNOW THE ACTUAL NUMBER?

According to a report in the BBC, three large peer-reviewed studies had found that India's deaths from Covid by September 2021 were "six to seven times higher than reported officially".

Earlier this week, the government released civil registration data showing 8.1 million deaths in 2020, a 6 per cent rise over the previous year.

India's absence from global databases such as the World Mortality Dataset means that the only national numbers the country has are model-based estimates of all-cause excess deaths, the BBC reported.

#Covid, #WHO, #Coronavirus, #Whocoviddeathsreport
The views and opinions expressed in this article are those of the authors and do not necessarily reflect the official policy or position of DailyO.in or the India Today Group. The writers are solely responsible for any claims arising out of the contents of this article.