For Bollywood, not all is well; some publicity comes with 'blowback'.

The recent uproar surrounding Deepika Padukone’s sudden visit to the Jawaharlal Nehru University campus is a great indicator of how the oft-repeated phrase, “there is no such thing as bad publicity,” is fast losing all credibility. Padukone had gone to JNU to express solidarity with the students of this country.

One of the reasons why mainstream cinema, and the stars it creates, fall for the ‘any-publicity-is-good-publicity’ trap is the need to develop newer viewer groups that go beyond their standard audience base. This need becomes accentuated in the case of a big-ticket film or a clash where two or three films would fight for the attention of the same audience over the opening weekend.

There is no denying that Padukone, who was also the producer of the film Chhapaak, might genuinely feel compassion for the students. At the same time, a simple explanation for why team Chhapaak felt the need to be seen with protesting students two days before its release might also have to do with the fact that the entire nation’s mainstream media was focused on the university campus.

Usually credited to the 19th century American showman and circus owner PT Barnum, the quotation, “There is no such thing as bad publicity,” comes across as an updated version of the French term Succès de scandale. It denotes an artistic work whose success could be attributed, in whole or in part, to public controversy surrounding the work. 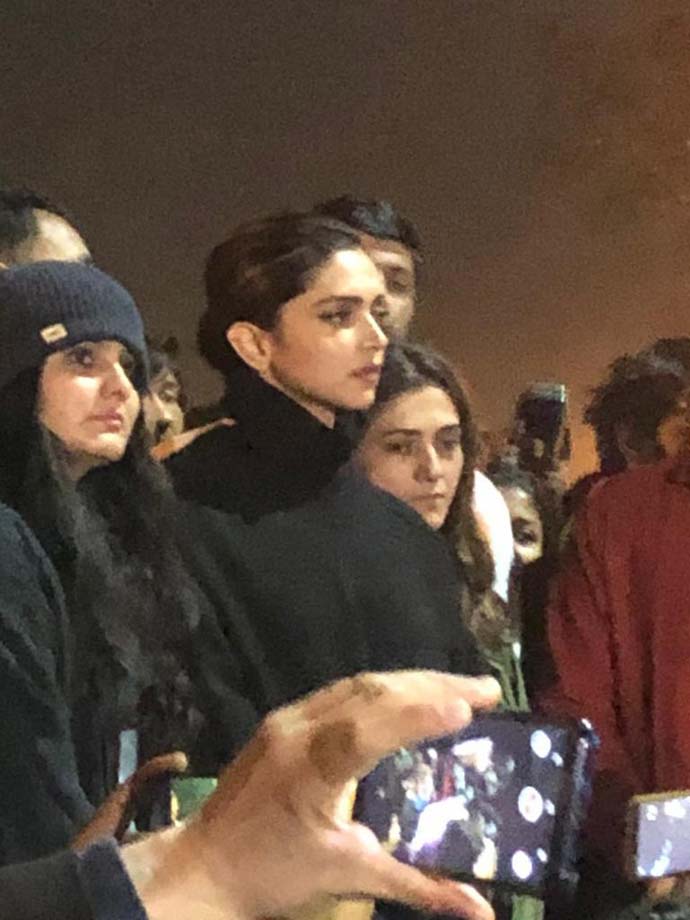 Deepika Padukone felt the need to be seen with protesting students to attract mainstream news focus and promote Chhapaak. This approach is not unique. (Photo: Twitter)

What Padukone attempted to do with Chhapaak — attract mainstream news focus on the film — is not unique. In April 2006, Aamir Khan, along with the filmmaker Rakeysh Omprakash Mehra and a few other cast members from Rang De Basanti (2006), joined the Narmada Bachao Andolan group of activists headed by Medha Patkar in their fight for justice. Fresh from the successes of Rang De Basanti, the media questioned the timing of Khan’s visit and wondered if this was a mere publicity stunt for his next release, Fanaa.

In December 2015, Shah Rukh Khan spoke about “religious intolerance” in the run-up to the release of his film Dilwale. If on the one hand, a film such as Rang De Basanti or Chhapaak could evoke the activist within an actor, on the other hand, with a movie like Dilwale, a Rohit Shetty entertainer that had little to do with reality, the talk about intolerance might appear misplaced.

Yet most A-list films try to find a connection with something that would help get more eyeballs. But unlike earlier times where the ‘backlash’ might not be intense or measurable beyond a personal reaction by some of the audience members, today the response goes beyond an individual.

Up until a few years ago, the viewer or the audience could only express disagreement by not watching a film in a personal capacity, but the advent of social media has allowed opinions to transcend the limitations of space. Considering the highly polarised world that we live in, it’s also possible for most people to think that any form of backlash is politically motivated and fuelled by IT cells and paid trolls. Some would argue that the so-called right-wing backlash and calls for boycott impacted Chhapaak more than anything else.

However, there is another side to the argument. Films are nearly always made with a specific target audience in mind and all publicity is to ensure the endorsement of this particular group. However, other events (read: trolling) overshadow certain realities such as the lacklustre response of a superstar’s traditional fan base. After the box office collections of Dilwale were adversely affected, Shah Rukh Khan apologised for his comments hurting some people, but felt that his opinion was “misinterpreted” and “misconstrued”, which impacted the film. Keeping in mind SRK’s box office stature, the question that one needs to ask is: Where was his colossal fan base and how come it didn’t respond?

Chhapaak’s opening day collections stood at between Rs 4.75 crore and Rs 5 crore, which was slightly lower than the Rs 6 crore, that the analysts had estimated. This was still better than Rs 2.7 crore that Kangana Ranaut starrer Panga could manage on its first day. Chhapaak got rave reviews and there was also some sympathy for Padukone following the stance she took. However, two things marred its fortunes at the box office: Firstly, the film would always jostle for space amid Ajay Devgn-Kajol-Saif Ali Khan starrer Tanhaji and Rajinikanth’s Darbar.

Secondly, the attention of the mainstay of Chhapaak’s audience, namely the young urban Indian, was elsewhere. Most PR agencies believe that all publicity is okay as long as it can be harnessed, but somewhere they also need to take into account something called ‘feedback.’ When it comes to Chhapaak, the trade, as well as the actors, need to understand a few things. Yes, there is bad publicity, and no matter how much anyone pushes the cause, it is possible that people might not like a film for its content.

Also read: Why Deepika Padukone's JNU visit could have cost Chhapaak at the box office

Post your comment
#Rang De Basanti, #Aamir Khan, #Chhapaak, #Deepika Padukone
The views and opinions expressed in this article are those of the authors and do not necessarily reflect the official policy or position of DailyO.in or the India Today Group. The writers are solely responsible for any claims arising out of the contents of this article.