Why doesn't Modi government want Delhi to be a World Heritage City?

Changes - as mentioned in the shrinking of Lutyens' Bungalow Zone proposal, to Sundar Colony or Golf Links - would mean negative alterations to the green belts.

On Thursday, April 20, 2017, the Delhi High Court dismissed a plea by its architect to stop the iconic "Hall of Nations" at Delhi’s Pragati Maidan from being demolished as part of the ongoing redevelopment project at India’s premier exhibition grounds.

While the court dismissed as “without merit” the plea by architect Raj Rewal, who designed the Hall of Nations that was constructed in 1972, it has been postponing hearing of a similar please in the case by Indian National Trust for Arts and Cultural Heritage (INTACH), a not-for-profit into conservation of built, tangible and intangible heritage. That is listed again for May 1 now.

As per a PTI report, “the court’s verdict was based on the decision of the Heritage Conservation Committee (HCC), set up for protecting heritage structures, which held that only 60-year-old or older buildings would be considered for heritage status.”

The Heritage Conservation Committee is a body under the Centre’s ministry of urban development, set up in 1983 for the protection of heritage buildings, heritage precincts and natural feature areas of Delhi.

Much has been written about in the past few days and months as architects and heritage conservationists are crying hoarse over the possibility of this structure being ravaged to pave the way for an ultra-modern convention-cum-exhibition centre. The focus of the widespread campaign is unwittingly becoming centred around the "Hall of Nations" vis-à-vis modern heritage.

But irrespective of what the high court decides in case of the INTACH plea, the development is an ominous sign of the times to come. Pulling down of this post-Independence "modern" structure will set in motion a chain of events which the real estate lobby - hand in glove with politicians and bureaucrats - plans for the rest of Delhi too.

Further, this may extend beyond Delhi to many other cities where modern, British-era or medieval heritage would be at the risk of similar treatment, leading to a permanent loss of several beautiful examples of built heritage - monuments, areas or vistas.

This reflects the attitude of the powers that be that surreptitiously dropped Delhi’s proposal from the World Heritage City race at the last minute in 2015. There are over 200 World Heritage Cities across the world, not a single in India.

Shahjahanabad (example of Mughal heritage - portions of the old city area of Delhi) and Lutyens' Bungalow Zone (LBZ, example of British design and architecture, the proposal had areas of New Delhi designated as LBZ) were two precincts listed as part of the nomination dossier "Delhi’s Imperial Capital Cities".

On the one hand, the central government claimed to focus on "holistic development of heritage cities" and launched in January 2015 with much fanfare the Heritage City Development and Augmentation Yojana (HRIDAY) scheme aimed to “preserve and revitalise the soul of the heritage city to reflect the city’s unique character by encouraging an aesthetically appealing, accessible, informative and secured environment” initially covering 12 cities.

But on the other hand, within a few months, on May 21, 2015, to be precise, it withdrew "Delhi’s Imperial Capital Cities" nomination, barely a month before UNESCO was to review nominations for "World Heritage City".

Next in line was the proposal to alter the boundaries of LBZ - the low-density population garden city area designed as part of post-1911 New Delhi, designed by Sir Edwin Landseer Lutyens and his associates, known for its grand vistas, lawns and manicured gardens, water channels along the Rajpath, the spacious bungalows and of course the tree-lined avenues.

Shrinking the LBZ from 28.73 sqkm in 2003 to 23.60 sqkm in 2015, the recommendations in the July 2015 "Report on Lutyens' Bungalow Zone (LBZ) Boundary and Development Guidelines" justified the proposed development guidelines saying it had been framed in a manner so as to “maintain the skyline, ensure that buildings do not cross the existing tree height, the overall garden city urban landscape character and ambience”.

Claiming “synergy between development and environment so as to achieve sustainability”, the report recommended an FAR of 20 and height limit of 12m for bungalows (changed from mostly single, ground floor spacious bungalows surrounded by sprawling lawns) and 32m building height for commercial and institutional purpose, among other things.

Map of the proposed changes in the Lutyens' Bungalow Zone (LBZ): 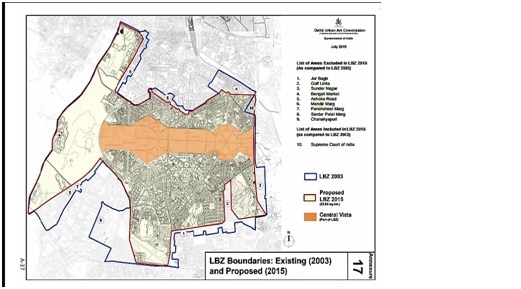 A lot of hue and cry followed but it is learnt that the government, hell bent on changes, has gone ahead with carrying out changes as suggested by the Delhi Urban Arts Commission (DUAC), tasked with preparing the draft guidelines and incorporating responses from public and institutions (such as INTACH that had prepared the dossier for Delhi’s nomination to the UNESCO).

More changes in the pipeline

Even as heritage conservationists are bothered about the changes that have already happened or are happening, there are more changes in the pipeline. Just last month, the government announced grand planto construct grade-separators at the Mathura Road-Bhairon Marg junction to make it signal free as part of the Pragati Maidan redevelopment project.

Planners simply thought they could dig tunnels metres away from Purana Qila, an Archaeological Survey of India (ASI) protected monument. But, fortunately, as reported by The Times of India, the ASI opposed the government’s plan as it reportedly denied permission to the Public Works Department for the underpass/tunnels etc, as proposed.

It would not remain a question of just heritage versus development. Air pollution has emerged as a major threat to the health of Delhiites. The area from Pragati Maidan that lies to the east of Mathura Road just off the Central Vista - the area comprising India Gate, the C-hexagone, Rajpath and the surrounding lawns - aligned north-south with Purana Qila, National Zoological Park, Sundar Nursery and Humayun’s Tomb (see map) acts as the much-needed green space for choked Delhi.

Changes - as mentioned in the shrinking of LBZ proposal - to the leafy tony Sundar Colony or the high-end Golf Links (right next to Delhi Golf Club) would mean negative alterations to these green belts.

So, be it the state-of-the-art modern integrated exhibition-cum-convention centre at Pragati Maidan or allowing tall buildings and increased FAR in green leafy colonies, the government is doing a huge disservice not just to the built heritage but also to the natural heritage.

No say of Delhi government

A major travesty lies in the fact that a large portion of the land under the New Delhi Municipal Council - Lutyens' Delhi is part of this area - rests with Land & Development Office (L&DO) and the Central Public Works Department, both under the Centre.

Delhi’s famed (read despairing) "multiplicity of agencies" is at work here too, with no single agency having comprehensive data about land ownership. This results in myriad decisions about Delhi’s prime location being taken by people in the Union ministry of urban development (MoUD), who have little or no connect with the city.

But then, if this multiplicity of agencies and lack of ownership prevents the Delhi government from taking any decision about land use issues, it cannot be absolved of bowing down to the Centre’s forced withdrawal of Delhi’s proposal for World Heritage City.

CM Arvind Kejriwal, who leaves no occasion to blame Prime Minister Narendra Modi for all things political, left it to his culture minister Kapil Mishra to take up and pursue the matter with the central agencies. Mishra, on his part, only wrote a cursory letter to the Union culture minister.

Does Delhi stand a chance at being ‘World Heritage City’ again?

The central government could have represented Delhi’s proposal in June 2016 again but that was not done. The need was to take care of those changes in the proposal for overhauling the LBZ that would not impact the nomination’s outstanding universal value (OUV).

Heritage conservationists have time and again maintained that "World Heritage City" tag need not necessarily hamper development. It does not mean that all development in any city/area nominated is frozen because of the tag.

In fact, M Saleem Beg, member of the National Monument Authority (NMA), had clearly pointed out in his written feedback to the report on LBZ guidelines that the LBZ has been notified in Delhi’s Master Plan and suggested: “A differentiated set of norms can be evolved for various areas of the LBZ without any change or intervention either in the concept or in the boundaries pertaining to the LBZ and the overall development norms.”

But AGK Menon of INTACH, who headed the team that prepared the Delhi’s nomination dossier and is also pursuing the legal case against pulling down of the "Hall of Nations" at Pragati Maidan, has given up hope. “It is not a question of whether Delhi can. This government (central government) clearly does not want it.”

He does not even hope against hope! May 1 will decide.

Also read: Crying shame that Delhi lost its chance to be a heritage city

Post your comment
#Lutyens' Delhi, #World Heritage city, #Delhi
The views and opinions expressed in this article are those of the authors and do not necessarily reflect the official policy or position of DailyO.in or the India Today Group. The writers are solely responsible for any claims arising out of the contents of this article.