How to fix the biggest dietary mistakes we make

The trick to fixing your dietary mistakes is simple.

People love to hear good news about their bad habits. Unfortunately, there is none as far as our dietary habits are concerned. Lifestyle diseases have been increasing globally and according to one of the largest global health studies by the Bill and Melinda Gates Foundation, ‘dietary factor’ is the leading cause of this phenomenon.

Heart disease and diabetes are sky-rocketing in India and those affected are also the most vulnerable to catching the coronavirus. So, let’s look at the dietary habits that are causing this epidemic in India. One would think that a country that has an ancient tradition of ‘pranic’ foods and such a large vegetarian population would easily meet the World Health Organisation (WHO)-recommended criterion of consuming minimum five helpings of fruits and vegetables daily. Unfortunately, Indians, including those who can afford it, don’t even come close to this. Studies also point out that vegetables are often overcooked in Indian households, which make them lose most of their nutrients. Isn’t that true? I’ve often had trouble identifying the vegetable in dishes because their gravy and masala is so thick and overpowering. Add loads of vegetables to all your meals. (Photo: Reuters)

Tip: Start your day with a green smoothie, followed by fruits. A green smoothie can be made with one-third edible raw greens (try buying organic) blended with two-third pulpy fruits like bananas and apples, etc. It’s the healthiest breakfast you can have. Incorporate a variety of veggies in anything you make - poha, oats, pulav, pizzas, etc and don’t ever plan your lunch and dinner without a vegetable dish.

Try steaming the veggies first and toss them in a pan later with the masalas. Pick up some interesting baking recipes. As a rule, make sure that your cooking doesn’t make the vegetables lose their colour and they don’t become soggy.

Both are essential oils but it’s important to maintain a healthy ratio between the two. Omega 6 is naturally found in the right quantity in plants but is highly concentrated in vegetable oils. Omega 3 (ALA) is found in nuts and seeds while DHA and EPA are found in fish and sea algae. Both oils have contradictory effects. While high quantity of Omega 6 is highly inflammatory and has a direct link with various diseases, Omega 3 is anti-inflammatory and vital for the health of our cells, brain, joints, etc. The ideal ratio is 1:1, but a healthy ratio is 3:1. The modern fried food diet tends to have a ratio as high as 20:1. In India, it goes even higher because of our dependence on cooking oils and poor intake of healthy Omega 3.

Tip: Start by using a brush or spray for your pan. Graduate to cooking without oil. It’s easy if you just change your mindset. Most veggies have water in them so they don’t stick. Add water little by little if they stick. Gravy dishes that use tomatoes are particularly easy to make. Make sure you start consuming healthy nuts like walnuts, flax and chia seeds and fish oil or a sea algae-based (fishes get their omega 3 from sea algae) supplement for your Omega 3.

A comparison between heart disease in the US and India shows that while consumption of too much meat is a big cause of worry for Americans, for Indians, it is the dependence on refined grains. Whole grains when refined lose most of their fibre, minerals and vitamins. Brown/red rice or whole wheat flour is a rarity in Indian households. Maida is commonly used in all snacks, whether those packaged like biscuits or homemade like mathri. Worse, most of these snacks are deep fried. Even the so-called ‘whole wheat’ bread that you find in most places is only 50 per cent wheat. Other grains that were so common earlier in India, have totally lost their appeal today.

Tip: There are organic whole wheat flour brands available today and some smaller local stores selling full bran aata. Use that for your rotis. Try replacing maida in all the snacks you make at home - mathris, namak pare, samosas, pizzas, etc with this and bake them. You can even bake your own bread with the best of ingredients. Brown rice can be used to make pulav, khichdi, even idlis. Start exploring and incorporating other grains like oats, barley, millets, etc. in your diet instead of depending on just one or two grains. 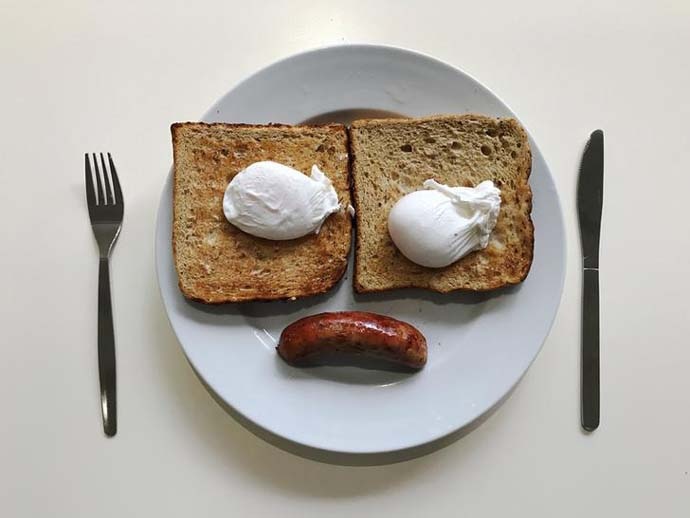 The daily recommended intake of sodium is just 1 teaspoon (5gms), but most Indians have too much salt in their meals, snacks, pickles, chutneys, etc. Salt consumption is directly linked to high blood pressure, which is the second-biggest cause for heart diseases.

Tip: Simply reduce salt in all foods, and gradually you will develop such a taste that anything too salty will become unpalatable for you. The same happens with sugar too.

Dairy consumption has increased disproportionately over the last few decades, with the industry booming. Milk has no fibre, is high in saturated fat, has cholesterol, and is inflammatory. While it is rich in calcium, that calcium is not easily absorbable. More and more global research has been indicting dairy in different ways, especially for diseases like diabetes. WHO recommends that not more than 5-10% calories in a meal should come from saturated fat.

But these days, people are having multiple dairy products in a single meal - ghee in tadka, cream in cooking, paneer in place of vegetables, accompanied by curd, followed by a dessert like mithai or ice cream. In addition to this, there is the daily glass of milk.

Tip: Reduce your dairy intake by not combining products. Incorporate cashew cream in your cooking. Try making baked vegetables in white sauce or daal makhni with it. It is a great substitute for cream and you can make delicious cheese with it too. Cashews have no cholesterol, have healthy poly and mono saturated fats and are packed with several minerals. Try out nut butters like almond and peanut. Avoid or reduce ghee, cheese and butter. You don’t want clogged arteries.

Post your comment
#Balanced diet, #Diabetes, #Nutrition, #Diet
The views and opinions expressed in this article are those of the authors and do not necessarily reflect the official policy or position of DailyO.in or the India Today Group. The writers are solely responsible for any claims arising out of the contents of this article.

Author is a media professional, currently working as a creative head. An avid traveller and movie buff, Madhulika loves music too but health and wellness are now her No. 1 passion. She has studied nutrition at Cornell University.