If the choice of DGP goes wrong, Kashmir could well move the Syria way as predicted by interlocutor Dineshwar Sharma.

In a sudden change of guard in Jammu and Kashmir Police, Dilbagh Singh replaced SP Vaid as the interim director general of police.

On September 6, by virtue of a late night order, Singh, who was heading the prison's department, was given additional charge of the DGPK. He took over the very next morning. 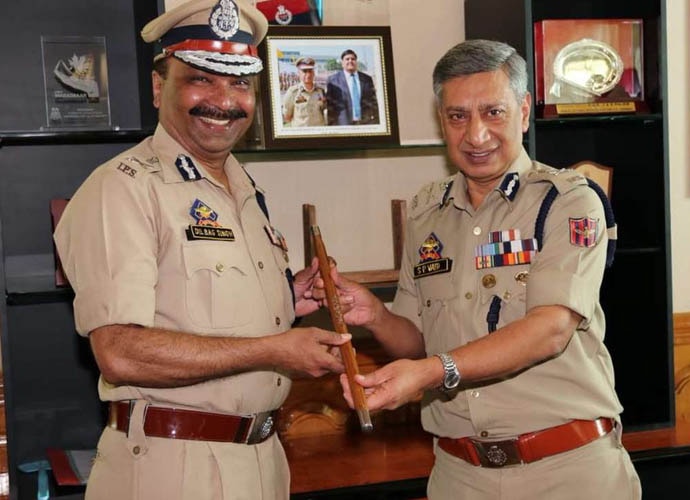 Vaid, caught in a verbal duel with the new state administration, was shunted out and posted as transport commissioner.

The move led to a controversy that soon reached the Supreme Court's door. The move reportedly became contentious because the state government did not consult the Union Public Service Commission in going ahead with Singh's appointment. The J&K government's counsel, Shoeb Alam, told the court that it appointed an interim DGP because "We cannot afford the police force to be without a chief".

The Centre, meanwhile told the SC through attorney general KK Venugopal that the prohibition to appoint an acting DGP was introduced to prevent misuse of the two-year fixed tenure given in an earlier verdict of the apex court. The Supreme Court on September 11, however, refused to interfere in the matter at this stage.

Sh Dilbag Singh IPS today took over as the DGP of J&K Police.On his arrival he was received by senior police officers of different wings.Chaired high level meeting of officers .The DGP J&K was presented guard of honour. pic.twitter.com/Tfs62G5m2B

Reports suggest that even as the state government reached out made the interim appointment, it simultaneously submitted a list of five senior Indian Police Service (IPS) officers to the UPSC for appointment as DGP.

The list includes DR Doley Barman and Navin Agarwal, both of whom are on central deputation. The third name was that of VK Singh, who has returned from a central deputation, is now special DGP Police Headquarters. But none of the three have any apparent track record of serving in any position that required tackling law and order, or militancy.

The other two names include Dilbagh Singh and Shiv Murari Sahai, currently posted as a joint secretary in National Security Council Secretariat, where he is deputy to the national security adviser Ajit Doval.

Sahai and Singh are seen as top contenders for the post.

As director general (prisons), Singh is credited with fortifying jails in the state after dreaded Pakistani militant Naveed Jat escaped from captivity in 2017.

Singh is also seen as a favourite of K Vijay Kumar, governor Satya Pal Malik's adviser on home affairs. The chemistry between the two may add to Singh's prospects.

This is also being seen as the reason for Singh emerging as the top choice to take charge as the interim DGP.

What however works against Singh is that he has no experience of working in Kashmir since 2000. Prior to this period, Singh had served as the DIG of south Kashmir. He was subsequently suspended for his alleged connection in a police recruitment scam. Though the selection list was subsequently quashed, Singh was reinstated. But he wasn't posted in the Valley since then.

Sahai, on the other hand, is seen among the most successful inspector generals of police (IGP) to have served in Kashmir in the last 30 odd years of turmoil.

During his twin stints as the IGP he not only restored normalcy after spells of unrests but also managed to bring militancy to the record low of 16 in 2013, when he last headed the Kashmir province. There are fears that if nothing is done quickly the situation in Kashmir could spiral out of control. (Source: Reuters)

After his first stint in 2007, when he largely weeded out Hizbul Mujahideen, Sahai got his second stint as IGP Kashmir in 2010. Back then the Valley was witnessing a mass agitation that left around 120 people dead.

Within three months of his taking over, Kashmir was not only back to normal but the year witnessed a decline in the number of locals joining militant ranks and saw the figures fall to 54.

For the next three consecutive years, the local recruitment in militant outfits continued to decline to 23 in 2011 and 21 in 2012, respectively, before reaching its lowest in 2013.

But then, Sahai comes with his own drawbacks.

Mainstream politicians from National Conference and Peoples Democratic Party in the state often look at him as an "astute cop who doesn't go by political dictations in matters of critical policing where national interests are more important than regional stakes".

And this has been seen as the main reason due to which Sahai was given a critical charge of IGP Kashmir by successive regimes only when other options failed.

Interestingly, on both occasions, he was unceremoniously shown the door once things were back to normal.

Currently, with continued rise in number of local youth joining militancy, the situation in Kashmir is worsening. The situation continues to be uneasy more so since July 2016 when Hizb commander Burhan Muzaffar Wani was killed.

The law and order situation is such that policemen have been served with an advisory on even visiting their homes. Over one dozen family members of policemen were abducted by the militants in the recent past, a scary development that is believed to have led to Vaid unceremonious farewell from his position.

Amid festering crises, all eyes are on the UPSC and the Centre over the appointment of the DGP.

This also presents an opportunity for Dineshwar Sharma to use his good offices to help in making the final choice which is in the best interest of the Valley.

Sharma has already raised the possibility of Kashmir turning into a Syria like situation so he must use his position to help improve the ground situation.

Also read: How move to end militancy has led to a rise in the number of militants in Kashmir

Post your comment
#Hizbul-mujahideen, #Kashmir crisis, #Sp vaid, #Dilbagh singh
The views and opinions expressed in this article are those of the authors and do not necessarily reflect the official policy or position of DailyO.in or the India Today Group. The writers are solely responsible for any claims arising out of the contents of this article.