The Blind Spot: Exploring the sexuality of the visually impaired

Karan darted these lines with poised poetic panache on being asked if he remembered what falling in love for the first time felt like. “It changed me as a person,” he said. Donning well-fitted jeans and a yellow striped shirt, he was sipping his cup of tea when we started talking about his first relationship. This story may sound quite prescribed for a boy his age but there was something that made him different: 15-year-old Karan was congenitally blind.

My interaction with him and various other visually impaired people bought to light some remarkable stories of physical and emotional exploration. Talking to them about beauty, intimacy and harassment among a gamut of other things smashed stereotypes— normally associated with the visually impaired— and presented fresh perspectives.

Karan exuded notable showmanship and talked at length about poetry and his daily experiences with the opposite sex. Narrating an incident in which he accidentally bumped into a girl while playing with friends was his first lesson in female anatomy. “It felt awkward but piqued my interest to know more,” he said.

Talking about how blind children discover differences between them, Preeti Monga, a visually impaired activist and Founder of Silver Linings Trust that works towards the inclusion of blind people into mainstream society feels that kids devoid of vision start exploring at an early stage. “Accidental brushing against the person of the opposite sex is one of the first ways which most totally blind youngsters have to discover what the opposite sex could look like. Moreover, with more education and increased access to the virtual world people with vision impairment have enough information at their disposal to understand these things.” 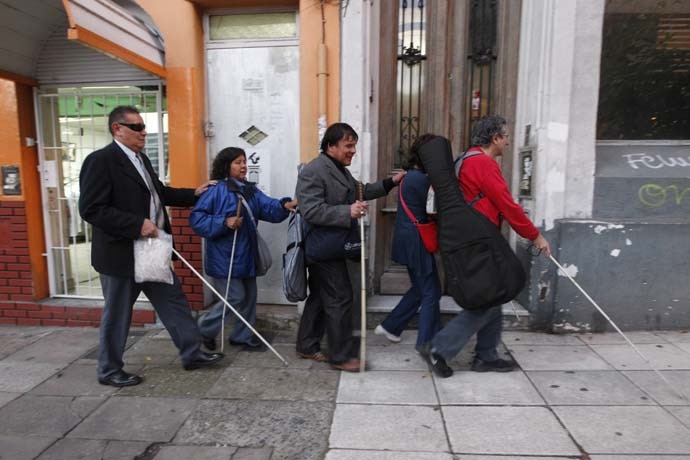 The problem isn’t the disability; it’s what us ‘ignorant normals’ make of it. (Photo: Reuters)

In a visually-reliant, appearance-oriented culture, it is often easy to typecast the visually impaired. Among the many questions that blind people find themselves fielding regularly, there is one about whether blind people care about their appearance.

Blind people may not be able to admire someone's beauty from across the room, make eye contact, or read body language but they are sexually attracted to personalities. “I'm attracted to what they say, the way they say it, their voice…” said Riya, a feisty 16-year-old blind girl with a good sense of style herself.

Sexuality is not sex. It is about people’s experience of themselves physically, emotionally and mentally. It includes one’s interaction with their bodies, their perception of pleasure, the idea of beauty and their personal well-being. While the experience of sexuality for the blind may be as exciting as anyone else’s, there are certain experiences which can be more difficult to deal with. Victims of sexual harassment can suffer significant psychological effects and those effects are worse when you can’t see the perpetrator. According to a 2018 Human Rights Watch report, women and girls with disabilities face a higher risk of being sexually assaulted and may find it more difficult to escape from violent situations due to limited mobility.

Narrating a harrowing incident, a visually impaired friend recently expressed her vulnerability at not having been able to see her harasser who molested her in a mall. She could also never work up the courage to tell her parents about it despite belonging to a fairly liberal urban family.

One of the prime reasons for people’s ill-informed acuities regarding disabled sexuality is its media representation. Blind characters are so rarely depicted as sexy or sexual, that it has become easy to assume that they’re either saints or asexual. Though, Blind women do make it to some cultural products but mostly to satisfy certain fetishes. They’re hypersexualized to appeal to those who are turned on by the idea of exerting power over people they find ‘weak’. This mindset is a manifestation of the stigma surrounding visually impaired people—that they are high and dry beings rather than those with legitimate desires.

Also read: I will never know how this world looks. But my life is colourful

#Pornography, #Sexuality, #Visually impaired persons, #Disability
The views and opinions expressed in this article are those of the authors and do not necessarily reflect the official policy or position of DailyO.in or the India Today Group. The writers are solely responsible for any claims arising out of the contents of this article.

Devika practices the art of Public Affairs during the day and transforms into a chronicler of gender and pop culture by night.