Our hypocrisy of worshipping girl child on Ashtami

She may be the symbol of shakti, but she is robbed off education, which is meant to empower her.

What a paradox it is? Today, September 28, happens to be the birth anniversary of one of the greatest stalwarts of the freedom movement, Bhagat Singh, who radicalised the struggle for independence and inspired the younger generation countrywide.

His idea of a socialist India would have meant basic necessities, including food, education, health, and housing etc, for everyone.

Today, also happens to be Ashtami, the day on which according to Hindu mythology, goddess Durga appears from Kali’s forehead and beheads demon. Though mythology, it is celebrated with great fervour all over north India.

Another tradition that is followed in the Hindu families is the honouring of kanjaks (unmarried girls), touching their feet and worshipping them as a symbol of “shakti” ie power. But what hypocrisy it is to exhibit utter contempt to the real power of the girl child whose essential strength, which she must get from education, is completely robbed especially in the urban spectrum.

And this is not an isolated example of the girl child being sacrificed to modern capitalism where large-scale migration takes place from the rural areas to the urban centres, but a general trend which could easily be witnessed in the colonies aka the slums where these migrant workers live. The sufferer apart from the family quintessentially happens to be young girls who have to give more attention to the household even if they are as young as 5-11 years — the time when they should be in school.

The photograph below shows the classic form of worship, where a middle-class woman, (who happens to be my aunt) is worshipping migrant girls from the construction workers’ colony and the case in point happens to be from Panchkula in Haryana. 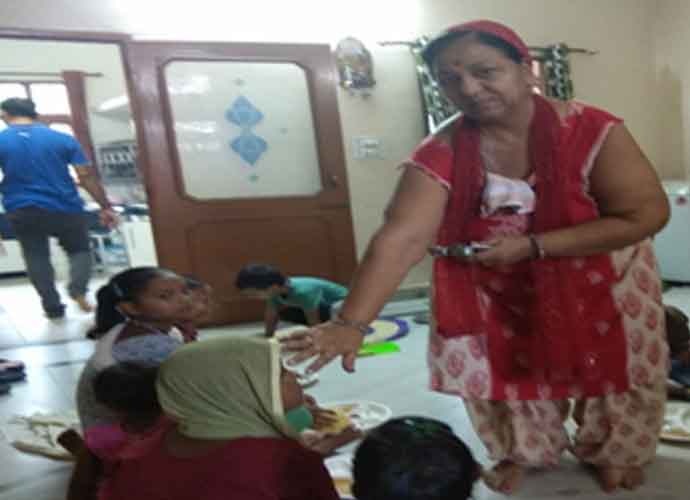 With the kind of urbanisation that has unfolded and nuclearisation that has happened, one hardly finds young girls to be served and “worshipped” from the middle class-gated communities. Hence they are gathered from the sites where construction workers live.

I witnessed a tussle between the neighbours to have the girls at their place. After all the great Hindu tradition has to be followed in principle. But is the principle only to ensure them food for one single day and not discuss their empowerment?

Why I am discussing the issue is simply because once we spoke to these girls and other male children a horrendous picture emerged. None of them (and I repeat none of them) go to school.

Talks with the children brought to the fore some distressing stories. Sahil is eight years and Bina is 11 years old. Both were in class 1 when their families shifted to the area and now there is no schooling for them. Their families had shifted to this place almost five years ago.

Out of 17 children, 10 were girls. Likewise, Lakhi is seven years, Puja 12 years and Aarti is 10 years, but none have gone to school. Pooja manages the household chores and even cooks for her family. I couldn’t talk to their family members as they had left for work. The children narrated they are from the Saharsa district of Bihar and had migrated 5-10 years ago. They are getting no formal schooling. The provision of child shelters supposed to be provided by the contractor and anganwaris by the social welfare department are completely absent. Similarly, the district administration which is under the BJP government has hardly paid any attention to the plight of these children. Forget economic empowerment, even basic education is not available for the children.

The state, and here I mean the nation-state, has to revisit its policy for the education of children and especially the children of migrant workers who are the worst hit by neo-liberalism. Though the government of India boasts of spending over Rs 1 lakh crore on this sector, the reality is different and this is extremely detrimental not just for the health of children but the nation as a whole. The nation shining campaign has been drubbed in the past. Let’s work on the realities and the objective situation which is alarming and screaming for intervention.

To worship them, especially the girl child, on this day is merely hypocrisy and another way of continuing the tradition and this should stop.

Post your comment
#Migrants, #Bhagat Singh, #Ashtami, #Durga
The views and opinions expressed in this article are those of the authors and do not necessarily reflect the official policy or position of DailyO.in or the India Today Group. The writers are solely responsible for any claims arising out of the contents of this article.