e-RUPI is a person-specific and purpose-specific payment system that will ensure that the benefits reach its intended beneficiaries in a targeted and leak-proof manner.

PM Modi today launched e-RUPI, an electronic voucher-based digital payment solution. e-RUPI is a person-specific and purpose-specific payment system that will ensure that the benefits reach its intended beneficiaries in a targeted and leak-proof manner. In Mumbai, Shiv Sena resorted to vandalism. This time, because they are enraged over the renaming of Mumbai's Chhatrapati Shivaji Maharaj International Airport as Adani Airport. And hence they voiced their protest by vandalising boards and damaging public property.

While that was Sena in Mumbai, in Delhi, Rahul Gandhi believes in conversations. He has invited leaders of opposition parties for a breakfast meeting tomorrow, in which he is likely to discuss the Opposition strategy for the Monsoon Session, at a time when the Parliament is seeing a deadlock.

And with that, now we move on to the ‘winning’ moments over the weekend and today from Tokyo.

It was a Chak De! moment in Tokyo this morning. And we mean quite literally as the North Pitch of Oi Hockey stadium was reverberating with songs from Chak De! India. And why not? The Indian women’s hockey team have marched their way into the Olympic semi-finals for the first time in history. This comes after a stunning 1-0 win over three-time champions Australia. 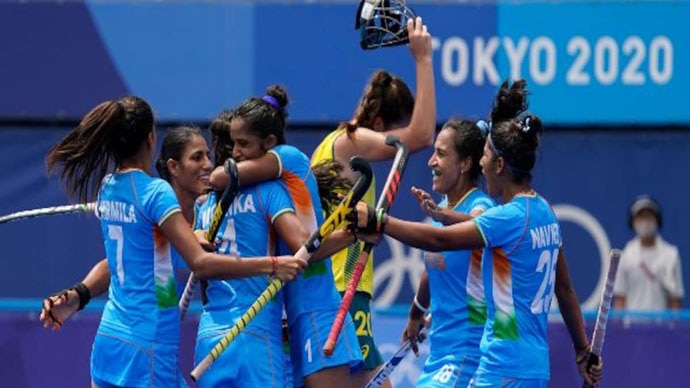 The Indian women’s hockey team have marched their way into the Olympic semi-finals for the first time in history.

Who saw them through it? Drag-flicker Gurjit Kaur’s historic winning goal was incidentally the only goal of the match. 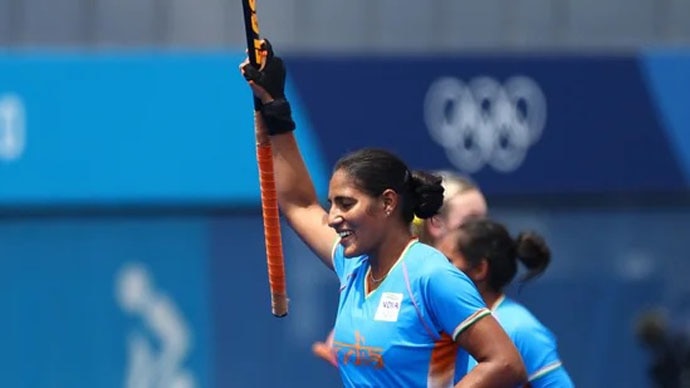 Gurjit Kaur celebrates after scripting a new chapter in the history of the Indian women's hockey team in the Olympics. (Photo: Reuters)

The women, led by their captain Rani Rampal, defended hard from the very onset, giving the Australians no leeway to score. And then, in the 22nd minute, Gurjit converted a lone penalty corner — India's only penalty corner in the quarterfinal match. Needless to say, they were screaming in triumph, some tears of joy and lots of happiness as they huddled with their coach Sjoerd Marijne. Even the Chak De! man, Shah Rukh Khan, couldn’t contain his elation or keep himself from sharing coach Sjoerd Marijne’s tweet. SRK had, perhaps, the best response to Marijne’s tweet where the coach informed his family that he would be returning home later than expected.

While that was today, Sunday was no less emotionally charged Sunday for India at the Tokyo Olympics. The men's hockey team have also entered the semi-finals, after a gap of 49 years.

However, it was shuttler PV Sindhu who scripted history, after she clinched the bronze medal for India in badminton at the 2020 Olympics in Tokyo. The ace player defeated her opponent —China's He Bing Jiao — 21-13 21-15 in the third-place play-off at Musashino Forest Plaza in Tokyo last evening. PV Sindhu scripted history after she clinched the bronze medal for India in badminton at the 2020 Olympics in Tokyo. (Reuters)

With this, Sindhu becomes the first Indian woman to win two individual medals at Olympics. At the 2016 Rio Olympic Games, she became the first female athlete from India to win an Olympic silver medal. And now, with two medals to her tally, she is at par with wrestler Sushil Kumar — the only other Indian to win two Olympic medals — a silver at the London Games in 2012 and followed it up with his bronze at 2008 Beijing Olympics.

Our Word Of The Day today is medal. No brainer. With India scripting one record after another, we are looking at quite a few medals to come home. The word medal is defined by the dictionary as ‘a metal disc typically of the size of a large coin and bearing an inscription or design, made to commemorate an event or awarded as a distinction to someone such as a soldier or athlete.’ It comes from the Latin word metallum that translates to “metal”.

Coming back to Sindhu, her commitment to badminton is paramount. For more than 12 years, her father would wake her up at 3 am to take her to Pullela Gopichand's academy where she trained. The distance they travelled was around 60 kilometres one way. And in a day and age when it is difficult to fathom a life without the screen, a then 21-year-old Sindhu gave up her phone to focus on training for the Rio Olympics. Pullela Gopichand, her coach, took her phone away from her for a whole three months. “Sindhu did not have her phone during the last three months. The first thing is I would return her phone,” an elated Gopichand had said after Sindhu's silver-winning feat in 2016. Sindhu, after she bagged the Olympic silver at badminton in Rio in 2016. (File photo)

However, one of her biggest sacrifices was in 2012, when a 17-year-old Sindhu missed her elder sister’s wedding. When P Divya got married in Hyderabad in 2012, her baby sister was not around to be the bridesmaid. Instead, she was at a tournament — playing at the Syed Modi International India Grand Prix Gold in Lucknow at the time. A sacrifice she made smilingly. Sindhu, along with Mirabai Chanu and Lovlina Borgohain, led the Indian charge from the forefront at the world's biggest sporting event. It was indeed a show of India's 'nari shakti'. Sindhu is coming home with a bronze medal and Chanu has already brought home a silver. We are now rooting for Lovlina Borgohain, who aims to script history by becoming the first Indian boxer to win a gold medal. The Guwahati-based pugilist will next square off against top seed Busenaz Surmeneli in her semifinal bout on Wednesday, the same day that the Indian women hockey team will play their maiden Olympic semi-final. 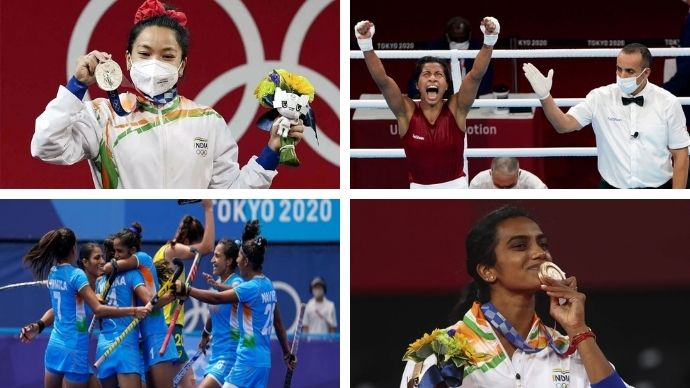 However, all that can wait as Sindhu now will come home to have ice cream with the Prime Minister as he promised her.

Being an athlete requires a rigorous schedule and hardwork. I asked @Pvsindhu1 about her love for ice-cream and also interacted with her parents. pic.twitter.com/Hlapc8VJhp

While the PM and Sindhu can decide their ice cream flavour when they meet, we will treat you today to the ultimate comfort food — Panta Bhaat.

#Indian women's hockey team, #PV Sindhu, #E-rupi, #Tokyo olympics 2020
The views and opinions expressed in this article are those of the authors and do not necessarily reflect the official policy or position of DailyO.in or the India Today Group. The writers are solely responsible for any claims arising out of the contents of this article.