DailyOh! Didi's phone hack to prevent snooping, to the asteroid hurtling towards us

The asteroid, named 2008Go20 will whizz past the Earth on Friday and is roughly thrice the size of the Taj Mahal.

Today is Eid Al-Adha and it is a day that Muslims celebrate with great aplomb — at least they used to, in the pre-pandemic era. Like on every other festival over the past year and a half, Covid-19 has cast a shadow on the Eid celebrations today as well.

Religious and festive gatherings are prohibited in most places as a part of Covid-related restrictions; and the celebrations this year were subdued. A desolated Jama Masjid this morning, bereft of Eid Al-Adha celebrations in the wake of the pandemic. (Photo: AP)

There are two Eids in a year. The other Eid — Eid ul-Fitr — is the festival of the breaking of the fast, the end of Ramzan when Muslims observe Roza. That was on May 14 this year.

For the non-Muslims and the uninitiated, it can be confusing as both the festivals are called Eid, and the greeting is “Eid Mubarak”. So, what makes today’s Eid so special? 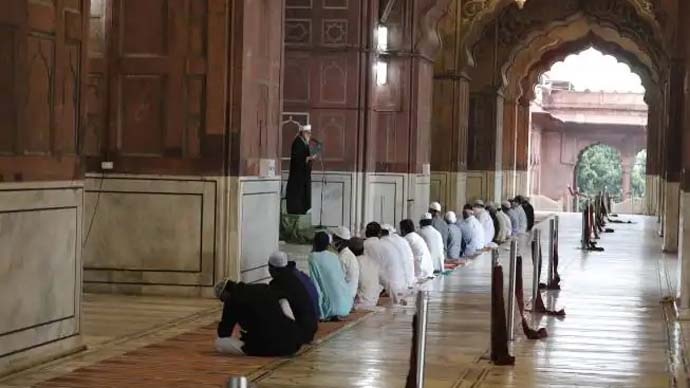 As we told you earlier, the word “Eid” means a feast or festival. But what is al-Adha? The word Al or أل in Arabic means “the” and our Word Of The Day, Adha or أَضْحَى in Arabic means “sacrificial animal” or “victim”. It comes from another Arabic word ḍaḥḥā or ضَحَّى that translates to "sacrifice” or “immolate”.

While it may sound ominous, the story of Eid al-Adha is the one marking utmost devotion to the almighty. It is marked to commemorate the Quranic tale of Prophet Ibrahim’s willingness to sacrifice his son Ismail as an act of obedience to God. It is said that God was pleased with his willingness and devotion and replaced the son with a ram.

It is customary to sacrifice an animal, usually a goat, earning the festival the alternate name of Bakrid. The meat is then divided into three parts — meant to be shared with family, friends and poor people respectively — promoting the message of kindness and equality. And this Eid, we recommend you to try the Eid staple, pretty much - the mutton biryani. 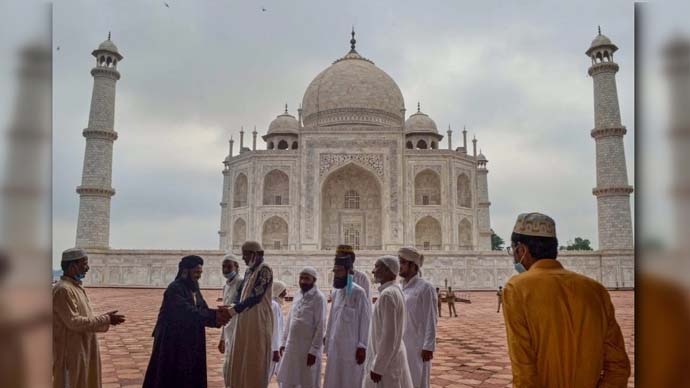 People greet each other on Eid al-Adha at the Taj Mahal complex in Agra. (Photo: PTI)

This is the time of the year when many Muslims perform the Hajj, and Eid al-Adha is the last day of Hajj — a reason in itself to celebrate.

While that was all about the festival, muted celebration and the significance, let us now bring you some other news.

The turmoil and infighting in the Punjab Congress unit seem far from over. It looked like a temporary truce when Navjot Singh Sidhu was appointed the president of the Punjab Pradesh Congress on Sunday. However, a disgruntled Chief Minister Captain Amarinder Singh has expressed his displeasure in more ways than one. And a day after Captain's media advisor tweeted that the CM won't meet Sidhu unless he tenders a public apology for his derogatory attacks on social media, Sidhu is now all set to invite the Captain to the event on Friday where he (Sidhu) will formally assume charge as he President of the Punjab Congress.

In Bengal, CM Mamata Banerjee launched a scathing attack on the Centre today over the Pegasus spyware row, she displayed her phone camera covered by a plaster, ostensibly to prevent snooping. A little further north, the Chinese military has increased its activities along the Line of Actual Control (LAC) in the Barahoti area of Uttarakhand. The movement on the Chinese side in the area has reportedly been seen after a gap of over six months. As per government sources, around 40 troops of the People’s Liberation Army (PLA) were recently spotted patrolling the area along the LAC in Barahoti.

While that was news of the neighbour across the border, let us now get you news from across the galaxy.

In the next three days, on July 24, a huge asteroid will whizz past the Earth. And when we say huge, we mean really huge. The asteroid, named '2008Go20' is about 220 metres in diameter — roughly about the size of a stadium, bigger than an average cricket ground and thrice the size of the Taj Mahal, to put it in perspective. A huge asteroid will whizz past the Earth on July 24. (Photo: Getty)

It is hurtling towards Earth at a very high speed — at eight kilometres per second, or about 28,800 km/hour. However, you don’t need to worry much about it hitting you, as it is said to pass Earth at a relatively safe distance — about 4.7 million kilometres away — roughly eight times the distance between the Earth and Moon.

However, did you know about the largest asteroid impact in recorded history? You might not have, because it was over a hundred years ago. And it was explosive — literally.

Named the Tunguska Event, this enormous explosion is estimated to have occurred at 7.14 am (give or take one minute) on June 30, 1908. It was at an altitude of 15,000 to 30,000 feet (for perspective, the height of Mount Everest is 8,849 metres - 29,032 feet). The energy of the explosion is estimated to have an explosive force of as much as 15 megatons of TNT— thousand times more powerful than the atomic bomb dropped on Hiroshima on August 6, 1945. Vast areas were flattened by a meteorite in Tunguska in 1908. (Photo: Wikimedia Commons)

While some scientists contend that a comet caused the explosion, others firmly believe that it was caused by an asteroid, perhaps 50 to 100 metres in diameter — half the size of the asteroid set to whizz past Earth on Friday.

The best part is that the Tunguska Event left no crater impact. The only likely remains of the object (comet or asteroid) are a few small fragments, each less than a millimetre across. However, nothing grows on the land of the explosion site. To this day an impact crater has never been found, leaving an area where no trees grow. (Photo: Getty Images)

On that note, we say bye for today. We will be back tomorrow with more news, views and trivia.

#Eid Al-Adha, #Tunguska explosion, #Asteroid, #Mamata Banerjee
The views and opinions expressed in this article are those of the authors and do not necessarily reflect the official policy or position of DailyO.in or the India Today Group. The writers are solely responsible for any claims arising out of the contents of this article.