Farmers say members of the panel are in favour of farm laws, decide to continue protests.

More vaccine consignments reached more parts of India today and the jabs could start reaching people on Saturday, January 16, with Prime Minister Narendra Modi launching the vaccination drive. For now, people will not have a choice over what vaccine they get because in the driving seat of the vaccination programme is the government. The choice will not be driven by the government. No, not the Supreme Court either, but availability. When the vaccines are available for private purchase, we can decide which one to have. Farmers won’t get to decide who to have on the Supreme Court panel because it is the Supreme Court’s panel. Farmers have their own panels. But the Supreme Court’s panel is supreme and on the panel, we told you yesterday, are Bhupender Singh Mann, Anil Ghanwant, Ashok Gulati and Pramod K Joshi. The allegation from farmers and the Congress is that most – some say all - members on the panel have spoken in favour of the farm laws. Farmers have rejected the SC panel but that won’t stop the panel from submitting its report to SC. SC will deliver its verdict on the basis of the report.

What’s up with farm laws meanwhile? If you put a law on hold, there is no law. So, technically farm laws are once again farm bills. But farm bills were passed by Parliament, so they are farm laws, albeit on hold. It's Democrazy.

Since everyone’s opinion matters in a Democrazy, a farmers group reportedly decided that Janhvi Kapoor’s views on farmers protest are also important. So, they gathered at Bassi Pathana city and halted the shooting of a movie in which Kapoor is the lead. They demanded her opinion on the farmers' protest against farm laws. The group was dispersed by the movie crew. And it remains unclear if the group wants the opinion of specific celebrities or just celebrities they can get hold of in Punjab. If this is crazy, the world’s oldest Democrazy is crazier. Vice-President Mike Pence has rejected Nancy Pelosi’s demand that he invoke the 25th Amendment to oust Trump. Pence has contended Trump is already on his way out, so there is no need to push him out. But Democrats have decided to go ahead and push Trump so far away, he can’t return. Trump, who can’t return to Twitter, Facebook, Snapchat and almost every the social media spoke to the media and said people are very angry so he should not be impeached. And while mentioning platforms that have blocked him, we forgot to mention today YouTube too blocked Trump’s account ‘temporarily’.

Meanwhile, for the first time in 70 years, a woman has been executed in the US. Lisa Montgomery was convicted for murder in 2007. Lisa had murdered a woman who was eight months pregnant and then cut the foetus from womb. The child survived.

Now, that’s beyond brutal. Talking of brutality, let us tell you about KM Veerappan, India’s most notorious bandit. We are bringing him up today because a web series on the dacoit’s life, which involved the killing 97 policemen, 184 civilians and 900 elephants, has been put on hold. Veerappan’s wife, V Muthulakshmi, told a Bengaluru court that Veerappan: Hunger for Killing is based on ‘false and fabricated stories’. There is so much masala in Veerappan’s life and death that any more masala could spoil the story. Did you know he killed his first elephant at the age of 10? The man was 52 when he died. So for 42 years, he looted the jungle, killed animals, abducted high-profile people such as Rajkumar and H Nagappa, whom he later killed.

Veerappan, it is said, knew the jungle so well he could tell which animal it was by the way the animal crushed the leaves while walking. We can’t confirm if that is fact or fiction. What we can confirm is that he knew the jungle so well that teen states ki police - Tamil Nadu, Karnataka and Kerala - couldn’t nab him for over 40 years. But the hunt for the man revealed another side of him. You see, we all want to run away. Veerappan, who was always on the run, also wanted to run away from the life of the jungle. Veerappan released a lot of audio tapes from his hideouts, because maybe he too wanted to be heard out. In one such tape, he said he wanted to go on a long drive with his wife and two daughters. The third daughter, as you may already know, he had killed for being a daughter. Veerappan killed his first elephant when he was 10 years old. (Photo: Wikimedia Commons)

In another tape that the Special Task Force (STF) got hold of, Veerappan spoke of his escape plan. Do you know where he wanted to escape to? Vladimir Putin’s Russia. The STF personnel had a good laugh when they heard of this plan. He could never escape. On October 18, 2004, he was killed by Tamil Nadu STF in Operation Cocoon.

The car ride and the trip to Russia never happened. But there is no stopping Team India from accessing the gym and swimming pool at the Brisbane team hotel. Players will also get housekeeping facilities which had been denied to them so far as part of Covid protocols. The absence of housekeeping meant the players were cleaning their rooms, as well as washrooms. What’s wrong with cleaning your own washroom? Well, many are injured and are in Australia to play cricket, not busy themselves learning life skills like cooking and cleaning.

Team India got what team India wanted after BCCI intervened and told Cricket Australia that the players need better facilities. The last match of the over two-month-long tour starts on Friday.

But come Monday, and Delhi schools will reopen for classes 10 and 12, after nearly 10 months of remaining shut. For classes 10 and 12, the board exams are coming up and in India, what is more important than giving a board exam? The marks one scores in it. Only years later, one realises marks don’t matter. But don’t try telling that to a class 10 or 12 student now. If her parents get to know you told her so, you could land in serious trouble.

Stay away from trouble and enjoy Lohri. What is Lohri? A harvest festival. But why is it called Lohri? Lohri, the Word Of The Day, as per some stories, comes from the word loh, which means a big iron griddle or tava, used for making chapattis for community feasts. 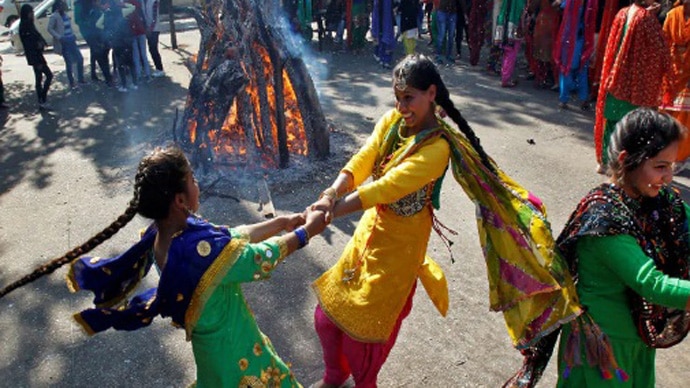 Another legend says Lohri was a woman. In fact, she was the sister of Holika. While the former perished in the Holi fire, the latter survived with Prahlad. Believe one or believe none. Legends are legends.

Do you know why most Lohri songs pay gratitude to Dulla Bhatti? Because the legendary hero of Punjab led a rebellion against Mughal emperor Akbar. So another legend there.

If there are festivals, there are legends around them. But when there is festival, there is food too. If you want to treat yourself to some Lohri delicacy, we recommend Aata Laddoo.

We will leave you trying to turn aata into laddoo for now. You can share your experience in the comment section below.

#Lohri, #Farm laws, #Donald trump impeachment, #Farmersprotest
The views and opinions expressed in this article are those of the authors and do not necessarily reflect the official policy or position of DailyO.in or the India Today Group. The writers are solely responsible for any claims arising out of the contents of this article.