Shatabdi Roy said she may meet Amit Shah in Delhi on Saturday because there is no point sitting idle and watching TV.

Farmers met central ministers for the ninth time and for the ninth time the meeting failed to end the protest going on at Delhi’s borders. Within Delhi, the protest was joined on the farmers’ side by the Gandhi siblings – Rahul and Priyanka. Of course, Congress workers were also present. The Congress protest happened just a few kilometers away from Vigyan Bhavan where the ninth meeting on farm laws was on amid an impasse. According to Rahul Gandhi, farm laws are aimed at finishing the farmers and the government will have to take them back. 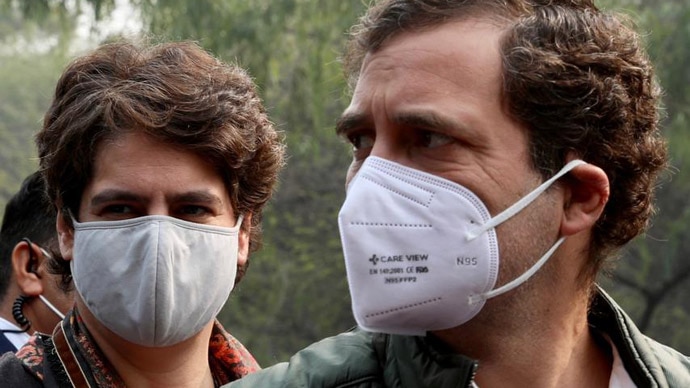 Rahul and Priyanka Gandhi during the protests against farm laws. (Photo: PTI)

Since we are talking farm laws and farmers, let us talk about farmland. Some fear that if the corporates are allowed to enter the farm sector, they will walk away with the land. We mean the ownership of the land. Guess who is the largest farmland owner in the whole of Unites States of America? Bill and Melinda Gates. A report of The Land Report says, the Gates have land across 18 states of the United States. With 242,000 acres of farmland, the Gates family is the top land holder. Bill Gates, you know, is the fourth richest person in the world.

While the Gates couple did not buy land in Asia and Africa, they did announce a USD 306 million (Rs 22,38,39,00,000) grant for farmers in sub-Saharan Africa and South Asia to push high-yield and sustainable agriculture.

Talking of grants, President of India Ram Nath Kovind today donated Rs 5,00,100 for the Ram temple construction in Ayodhya. A Gujarati diamond trader, meanwhile, has donated Rs 11,00,00,000 for the cause. The temple is likely to be ready by February 2024 before the Lok Sabha elections. But ahead of the West Bengal elections this year, Shatabdi may soon reach Delhi. Not the train, but Trinamool Congress MP Shatabdi Roy. Roy has said she may be in Delhi on Saturday and meet Home Minister Amit Shah. Why? Because it is better than sitting at home and watching TV. Nothing wrong with watching TV but if you get a chance to meet the Home Minister what’s left to compare. If you can use the meeting to push your career ahead, even better. So, Roy could well be seen starting off a new stint with BJP in 2021 after starting off her political career with Trinamool Congress in 2009. They say you have no permanent friends and enemies in politics. You can say that of life too. You can also choose to say nothing so obvious and just sit back and watch Tandav since the weekend has arrived and the series launched on Amazon Prime.

But before you get on with the weekend, a reminder of what it is today. Army Day. Army Day is celebrated on this day in recognition of Field Marshal Kodandera M Cariappa's (then a Lieutenant General) taking over as the first Commander-in-Chief of the Indian Army from General Sir Francis Butcher, the last British Commander-in-Chief of India. The takeover happened in 1949. You know the sacrifices the Indian Army makes for India and so today is special. And since the day is special, we want to tell you the story of an officer who too made such a sacrifice. That officer was Captain Gopi Singh Rathore. Rathore was aide de camp to former President KR Narayanan.

An aide de camp, as you may know, is a French expression for helper. In the military camp, the expression is used for personal assistant or secretary to a person of high rank.

Narayanan reportedly loved the way Rathore used to talk about the gardens with foreign dignitaries visiting the Rashtrapati Bhavan because the young officer loved horticulture. The two grew very fond of each other. Rathore was also a poet and short-story writer. His collection of poems was corrected by former PM Atal Bihari Vajpayee himself. The collection was published as Aaj Se Pehle. When Narayanan left office, Rathore was ADC to ex-President APJ Abdul Kalam. But Rathore longed to be where action was. The officer told Kalam that he wanted to serve in Kashmir. Soon he was posted to 14 Rashtriya Rifles Battalion in Bandipora. When Narayanan died on November 9, 2005, Rathore was reportedly in tears but could not leave the post to attend the last rites. On November 10, a grief-stricken Rathore had to lead an operation in Bandipora against terrorists who had taken refuge in a building. He lost his life in the operation but not before killing a terrorist ‘in close combat’.

Gopal Gandhi had been the secretary to Narayanan when Rathore was the ADC. And so Gopal Gandhi knew the equation between the two quite well. He remarked, “The President takes his ADC along.” Rathore was honoured with the Shaurya Chakra posthumously.

Lt Gen Satish Dua (retd), who has written the book India’s Bravehearts has many such stories to share. So, in case you are thinking what to read next, you can give the book a try. If you do not have the patience for books, you can watch Uri: The Surgical Strike (2019) if you haven’t already, or if you do not mind repeating movies. The Vicky Kaushal-starrer is worth a watch and then also a re-watch.

Army valour can give you goosebumps but it is Latin that gave us the word army. Army, the Word Of The Day, comes from Latin word armata and means land force. Forces that fight on land constitue army, just like forces fighting in the sky constitute airforce, and forces fighting in water form the navy.

Talking of the Indian Army, we are reminded of Pakistan, which is the country to whom we have lost most of our soldiers. Guess what Pakistan could lose? A Pakistan International Airlines plane. The plane was held by Malaysian authorities reportedly over nonpayment of dues but Malaysia was kind enough to organise the return of passengers, who were to fly to Pakistan on the plane. How Pakistan gets the plane to fly back to Pakistan will be watched closely. We can leave Pakistan to do the watching since we will be watching India roll out its vaccination drive tomorrow. You may not be one of those getting the vaccine over the next few days, weeks or months, but you will have a new caller tune. This one won’t have Big B telling us how to getting the virus, but someone else telling you not to trust the rumours regarding the vaccine.

So, listen only to the experts, apart from the caller tune.

On that note, we will take your leave for today and the next two days.

#Rahul Gandhi, #Shatabdi roy, #Farm laws, #Farmersprotest
The views and opinions expressed in this article are those of the authors and do not necessarily reflect the official policy or position of DailyO.in or the India Today Group. The writers are solely responsible for any claims arising out of the contents of this article.