6 things to know about 'ghost hunter' Gaurav Tiwari. What haunted his world?

The Indian Paranormal Society founder was found dead in mysterious circumstances, with a black line around his neck.

Famed "ghost hunter" Gaurav Tiwari's spent a life exploring the haunted, and in perfect macabre fashion, his death has left a mystery for the world to unravel.

His penchant for the unknown took him to some of India's most dreaded moors - abandoned forts, murky corridors and even UFOs.

Where did this thrill for the occult land him?

On July 7, the Indian Paranormal Society founder was found dead at his Dwarka home, with a black line around his neck.

The police suspects Tiwari committed suicide, a claim his family has refused to accept. Tiwari, who married only about five months ago, would stay out till late carrying out paranormal investigations.

This led to some friction within the family, according to the police. The night before his death, Gaurav Tiwari was conducting an investigation in Delhi's Janakpuri area and returned home at around 1am. This reportedly led to a spat between Tiwari and his mother.

The "ghost hunter" had told his wife that a "negative energy" was trying to pull him towards itself - a force he couldn't stop. 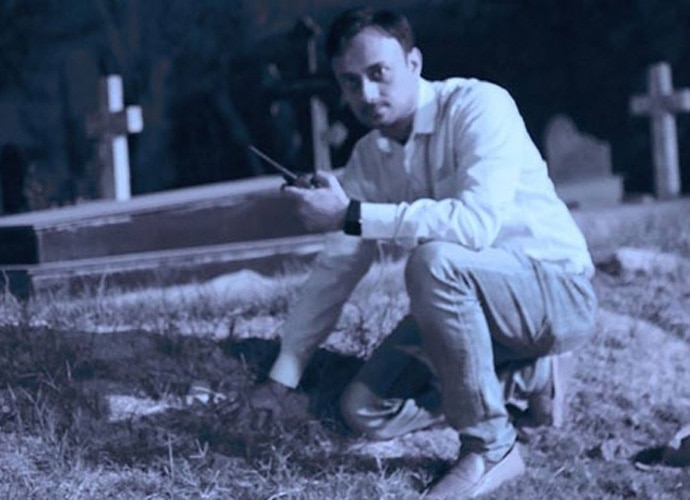 "Reverend" Gaurav Tiwari is an ordained minister of Metaphysical Church of Humanistic Sciences.

Two years ago, in an interview, when asked if ghosts exist, Tiwari said, "I believe for everything to manifest in reality, it has to first exist in our minds. Today, we can very well say that ghosts (in most cases) are nothing but products of our imaginations. It also depends on who you ask. For most people, ghosts are scary, ugly, spooky creatures who only mean to harm humanity."

But beyond his paranormal experiences, who was Gaurav Tiwari? Here are six less-known facts about the "ghost hunter":

1. Tiwari was a pilot by training. He turned into a "believer" in 2007 when during his stay in Florida to become a commercial pilot, he experienced paranormal phenomena. The ghost hunter experienced poltergeists and heard disembodied "whispers" in the apartment he was sharing with four other people. One of his flatmates also apparently saw an "apparition" of a young girl.

2. He has also featured in TV serials and movies like Tango Charlie and December 16. He began his acting career when he was 16 but eventually left it to pursue his flying ambitions.

3. "Reverend" Gaurav Tiwari is an ordained minister of Metaphysical Church of Humanistic Sciences. He is a certified paranormal investigator and UFO field investigator.

4. During his investigations, Tiwari has visitied around 6000 paranormal locations where he has investigated "hauntings", "mysterious creatures" and "UFO abductions".

5. He has also worked on various TV shows like, Haunted Weekends with Sunny Leone, MTV Girls Night Out, MTV He Ticket and Fear Files. Tiwari was also one of the top six paranormal experts to appear on Haunting: Australia.

6. The famous Bhangarh Fort in the Alwar district of Rajasthan was among the 6,000 places investigated by Tiwari. According to Tiwari and his team's investigation the fort is not haunted.

In his blog, Tiwari writes: "Superstition is at extreme in this area and nearby villages. That is why villagers themselves being afraid of spirits, stopped outsiders to visit Bhangarh ruins after dark."