Greta Thunberg and Vanessa Nakate are icons of climate change among the youth. The growing frustration with slow movement on mitigating climate change impact on societies is palpable in their words.

Youth climate activists Greta Thunberg and Vanessa Nakate heavily condemned global leaders for their empty promises to address the climate emergency. She called their previous statements ‘blah blah blah’ and accused them of “drowning” future generations with their promises.

QUOTE: “Build back better. Blah, blah, blah. Green economy. Blah blah blah. Net zero by 2050. Blah, blah, blah,” she said in a speech to the Youth4Climate summit in Milan, Italy, on Tuesday. “This is all we hear from our so-called leaders. Words that sound great but so far have not led to action. Our hopes and ambitions drown in their empty promises” she says.  Build Back Better is a slogan given by US President Joe Biden. 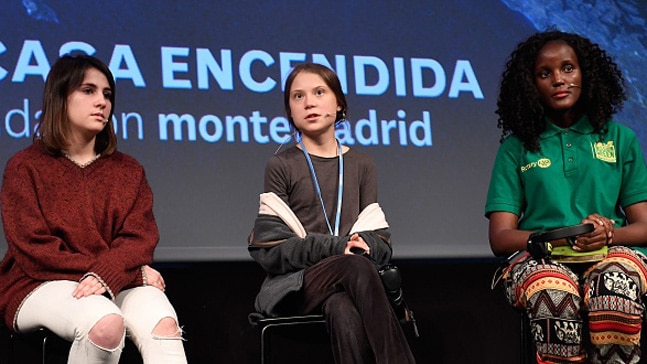 WHERE: Thunberg also quotes and criticised the intentions of the youth climate gathering that she made her speech at. The Youth4Climate summit is hosting 400 climate activists from 180 countries in Milan. The recommendations from this summit will then be sent to a major United Nations climate summit in Glasgow, Scotland, that begins October 31. Participants along with Thunberg are demanding accountability from leaders and a larger official role for young people.

“They invite cherry-picked young people to pretend they are listening to us. But they are not. They are clearly not listening to us. Just look at the numbers. Emissions are still rising. The science doesn't lie”. Leaders like to say, We can do it.' They obviously don't mean it. But we do,” the Swedish activist said. NO FUNDS: Vanessa Nakate also raised the issue of lack of funds. She said during her speech that the $117 billion (100 billion euros) that were pledged to help countries vulnerable to the climate change impact had not materialised. This is exceptionally crucial as we have suffered wildfires in California and Greece and floods in Germany and Belgium showing that “loss and damage is now possible everywhere.” “In fact, funds were promised by 2020, and we are still waiting,'' she added. She repeated Thunberg’s stance by saying, “No more empty conferences. It's time to show us the money. It's time, it's time, it's time. And don't forget to listen to the most affected people and areas.”

POSSIBILITY FOR REPAIR: Thunberg does show optimism by saying that it was not too late to reverse the effects of climate but specifies that she has heard enough from global leaders. “But they’ve now had 30 years of blah, blah, blah and where has that led us? We can still turn this around – it is entirely possible. It will take immediate, drastic annual emission reductions. But not if things go on like today. Our leaders’ intentional lack of action is a betrayal toward all present and future generations” says Thunberg.

THE O: Greta Thunberg and Vanessa Nakate are icons of climate change among the youth. The growing frustration with slow movement on mitigating climate change impact on societies is palpable in their words.