Taimur is only two years old today. Here's how he has changed our lives so much

From intruding media to travelling Bollywood nannies, we started addressing crucial issues we never knew existed before Taimur came along.

Just two years ago, Taimur Ali Khan was born in Mumbai on this day, though it seems that we have been seeing him for ages (because we have seen him so much). Prior to that, Kareena Kapoor’s pregnancy diet, her boldness in exposing her baby bump, Saif Ali Khan’s career et al occupied the discourse.

The collective adulation of a nation over a two-year-old something who has just started walking unsteadily is not justified to many people, who think that he has not done anything yet to deserve this kind of popularity.

Another section feels that this would harm the child in a serious way — as he grows up, the number of cameras following him will reduce one by one, and a kid who is so accustomed to glaring lights, to ‘Taimur, Taimur’ shouts, might find it hard to come to terms with this.

We don’t know what will happen with all that, but we absolutely know how Taimur changed us.

1. We looked into history Taimur vs Timur: Thanks to Taimur, we learnt about Timur's Shah Rukh as well. (Photo: Instagram/Wikipedia)

The day Taimur was born, he took Twitter by storm when his parents — Saif Ali Khan and Kareena Kapoor Khan — announced his name to be Taimur.

Apparently, what they had in their mind was an Arabic word ‘Taimur’, meaning 'iron'. But the name reminded us of the Mongolian invader, the blood-thirsty Timur Lyang. The name was criticised so much that at one point of time, Saif Ali Khan even deliberated on whether to change the name or not because he didn't want Taimur to be unpopular in school because of this name.

As he said in an interview, his daughter Sara Ali Khan, whose subject was history, encouraged him not to change the name because Taimur and Timur Lyang are different.

In fact, the name of Timur Lyang’s son was Shah Rukh!

Indeed, we looked into history. For many, it was the first time. No means no. Taimur taught us that. (Photo: Instagram)

Taimur is cute — but then, which kid isn’t?

AbRam (SRK-Gauri’s son), Aradhya, all these star kids have been there, done that, but not exactly how Taimur has been doing it.

Unknowingly, he has been sending out warm vibes since the first time the world got a glimpse of him, carefully parked on the shoulder of Saif Ali Khan. That warmth and comfort continued till the time he could crawl, stand up, walk, wave and say ‘no’ to the shutterbugs.

In-between, he has been photographed so many times that we started discussing the media’s encroachment into celebrity lives, and whether media professionals should be banned from clicking Taimur.

Well, here’s a myth-buster — many a photo apparently get shared from the handles of the publicists and managers. Thanks to Karan Johar for letting the world know that all celebrities come with a 'rate chart' for media houses. Breaking it down, every celebrity carries a rate which will be paid to the photographer once the photos are bought by media houses. Everyone now knows that one photo of Taimur fetches Rs 1,500 for the photograph.

Then there came the Taimur doll — and now, reportedly a movie with the same name by Madhur Bhandarkar is in the pipeline.

So, yes, Taimur represents an industry — which is just two years old.

4. The nannies of tinsel town 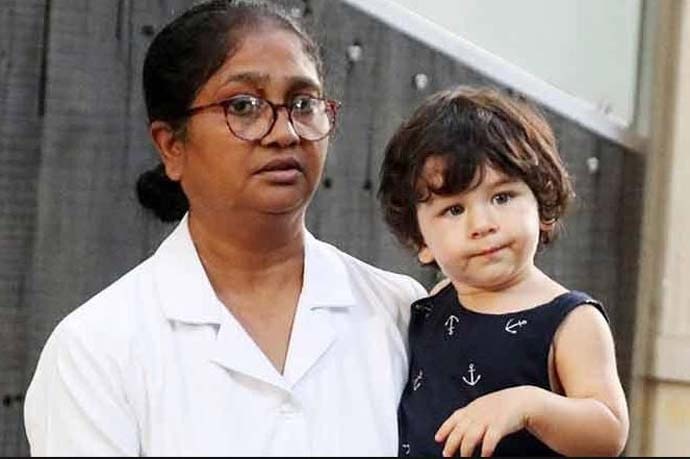 Taimur spoke for all those who were never heard. (Photo: Instagram)

Behind every successful Bollywood mother, there is a nanny.

But the industry never talked about them until Taimur’s nanny and her salary per month (over a lakh, reportedly) became the talk of the town. She is there in almost all photos of Taimur, holding him, reprimanding him, looking after him, and doing everything a nanny is supposed to do, being unmindful of the cameras capturing her as well.

The perks of her job thus include occasional media coverage and also, occasional foreign tours.

We managed to get all the Khans together. (Photo: Instagram)

We don’t know how many Rajkummar Raos, Nawazuddin Siddiquis and Ayushmann Khurranas are required to end the Khan-dan of Bollywood, because everyone is constantly asked which among the three (SRK, Salman, Aamir) Khans are the best, etc. Answering such questions has always been a headache.

But now, this Khan hegemony has ended, as many, including Ranveer Singh, have opted for the fourth Khan — Taimur Ali Khan.

Thus, it has been only two years, but marked with achievements that many grown-ups could never think of.

Also Read: Taimur Ali Khan withdrew from public life for two days: What happened after that?

#Saif Ali Khan, #Entertainment, #Bollywood, #Taimur Ali Khan
The views and opinions expressed in this article are those of the authors and do not necessarily reflect the official policy or position of DailyO.in or the India Today Group. The writers are solely responsible for any claims arising out of the contents of this article.