DailyOh! Who is left in Hathras now that no one is allowed to visit, to the protests in Delhi

The government is imposing Section 144 everywhere it catches a whiff of a protest.

Who is left when everyone is gone? “Only us,” Hathras DM Praveen Kumar Laxkar had this to say to the family of the victim of alleged gang rape, brutal assault, and a hurried burial in UP’s Hathras. Sound check and it sounds like a threat. In the village, there is silence because everyone has left. The Hathras victim's body was forcibly creamted by the police without the consent of the parents. (Photo: India Today)

The @dm_hathras caught on camera intimidating grieving victim’s family. Half the media is gone, other half will be gone soon. We will remain here he tells the victim’s father. How can there be a fair probe if this is the attitude of senior officials. 8 pm #Newstrack @IndiaToday pic.twitter.com/HZPylf9tDQ

Now when everyone is gone, you can always call those who have left or they can call you depending on who needs whom, but in this case, the mobile phones too are gone. Today morning when the media tried calling the family members, they found their phones had been switched off.

Cousin brother of Hathras victim alleges that the UP police has forcibly taken away phones of family members. Family members being stopped by authorities from talking to media personnel. Why should they not be allowed to speak out? What are government authorities trying to hide?

The victim’s cousin reportedly said that the family’s phones have been taken away forcibly. Laxkar didn’t specify that sab (all) included phones too. The more important left unspecified is that everybody is not gone, but is not being allowed to come. TMC MP Derek O’ Brien and other party leaders were stopped from entering the victim’s village as was the media. Derek was today pushed to the ground and then helped to rise up to his feet by the SDM. Oppression and compassion in one frame. Both nullified each other so what’s left is the UP administration’s determination to not let opposition leaders meet the victim’s family. Of course, Laxkar left too.

In Delhi, there is the Central administration and it has decided that people cannot gather at India Gate today for protests. Section 144 has been imposed around India Gate, which is an otherwise open gate that anyone can pass through. People have decided to change and gather at Jantar Mantar instead.

This blocking of protests may not have left Mahatma Gandhi too happy because he held protests at the heart of his strategy. But Gandhi has left and Gandhi protested against the Britishers, who too have left. What is left, with Gandhi and Britishers gone? The government of the day and, of course, Laxkar.

We did not bring Mahatma Gandhi out of the blue, you know, we brought him in because today is his 151st birth anniversary. Gandhi was born Mohandas Karamchand Gandhi like Laxkar was born Praveen Kumar Laxkar or Yogi Adityanath was born as Ajay Mohan Bisht. Gandhi went on to become Mahatma. Ajay Mohan Bisht insisted on becoming Yogi Adityanath, Laxkar remains Laxkar and remains in Hathras.

Some historians say it was Rabindranath Tagore who gave Mohandas Gandhi the title of Mahatma on March 6, 1915. Some contest it. We will not get into the contest because there are no prizes to win. 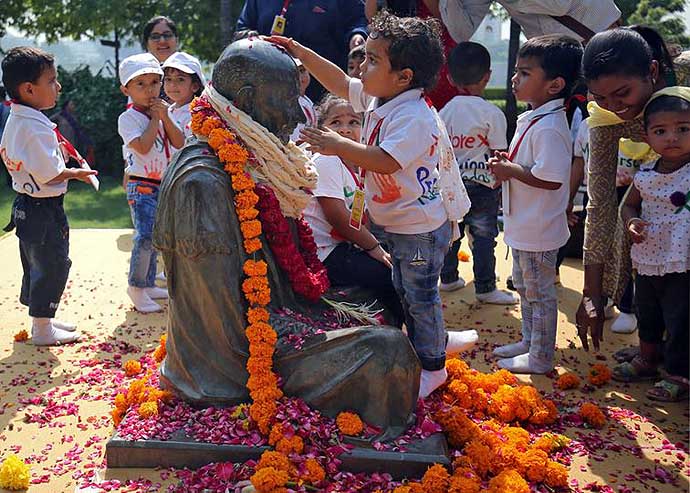 Some historians say it was Rabindranath Tagore who gave Mohandas Gandhi the title of Mahatma on March 6, 1915. (File Photo: Reuters)

We just want to explore the word Mahatma today because Mahatma is our Word Of The Day and it is Mahatma Gandhi’s birthday.

Mahatma comes from Sanskrit word mahātman – maha (great) plus atman (soul). Someone with a great soul is Mahatma. Theosophists are believed to have used the word in English for the first time in 1884, applying to certain imaginary beings with preternatural powers.

October 2, you know, isn’t just Gandhi Jayanti but Shastri Jayanti too. If it’s 151 for Gandhi, it is 116th for Shastri. If you share your birthday with a sibling, you will know Shastri's pain of sharing his birthday with Gandhi, even though we don’t know if birthday mattered to either.

A man that matters to the world, US President Donald Trump, has finally got what he was asking for – a coronavirus infection. May sound mean but we say he asked for it because he hardly wore a mask as he went about meeting people. Before you shrug that off as stupidity, do consider if there was a method to the madness. Trump may have not taken the mask because he wanted the antibodies. Antibodies won’t develop without antigen. So he had no choice but to get the antigen to get to the antibody.

Trump’s wife Melania too has tested positive. You can blame Donald Trump for that but a study has blamed him as the biggest driver of misinformation on Covid-19. A team from the Cornell Alliance for Science evaluated 38 million articles published by English-language, traditional media worldwide between January 1 and May 26 to arrive at the conclusion.

Talking of Covid-19, be careful when you take the test, which we hope you don’t have to. A coronavirus nasal swab test ruptured the lining at the base of a US woman's skull. This rupture led to a leak of the women’s cerebrospinal fluid. Doctors say this has put the woman’s brain at risk of infections. Now, it’s not just the test to blame because the woman reportedly had an underlying condition, which, together with the manner in which the test was conducted, led to the incident. A health worker collects a sample for Covid-19 testing. (Photo for representation: Reuters)

Film-maker Anurag Kashyap has told cops he can’t be held guilty of the incident an actress has accused him of because he was shooting in Sri Lanka and wasn’t in Mumbai at that time.

Talking of Mumbai, Shiv Sena leader Sanjay Raut has spoken today against what happened to Rahul Gandhi yesterday. He was referring to Gandhi being pushed to the ground by UP Police officials.

Raut said we should not forget that Rahul Gandi is Indira Gandhi's grandson and Rajiv’s son. Even those who are not Indira’s grandsons and granddaughter and Rajiv’s sons or daughters should not be pushed around when all they want to do is move ahead to meet a family.

But the reference of Indira reminded us of Indira Gandhi’s Belchhi visit in 1977. On May 27 that year, 11 Dalits were murdered in Bihar’s Belchhi. With their hands tied, the 11 men were shot and thrown into the fire one by one by a gang led by Mahabir Mahto and Prasuram Dhanuk, members of the neo-rich Kurmi caste.

The Emergency had ended but anger against the move was high and everywhere Indira went, she was greeted with boos and black flags. On August 11, Indira decided to visit Belchhi nevertheless. Her flight landed in Patna on August 13 and she was surrounded by Congress supporters. It was pouring. The journey looked impossible because of the ditches and slush.

Midway, her car got stuck. She took to a foot journey. The slogan that Indira supporters raised that day, “Indira tere abhao men Harijan maare jate hain (Indira, in your absence, Harijan are being killed).”

Her grandchildren yesterday took to a foot journey to reach Hathras and meet the Dalit family of the victim after their cars were stopped, but they were taken away to a government guest house instead. Priyanka Gandhi took her 'symbolic' protest to the Valmiki temple in Delhi because the Hathras victim belonged to the Valmiki community.

The Belchhi outreach is what is said to have marked Indira’s comeback after the 1977 debacle.

To the question of when is the vaccine coming, AIIMS director Randeep Guleria said it is expected by January 2021. That he said depends on a lot of factors and if all factors fall in place, the vaccine will be available by January next year.

If you, like Trump, have developed antibodies, you may not be in as great a hurry to skip months to get to January 2021, but others are. Time moves at its own pace whether one is in a hurry, or has time at hand, or doesn’t care about time.

If you aren’t too busy and want to spend time remembering the Mahatma, you can watch Rajkumar Hirani’s Lage Raho Munna Bhai (2006). You can also watch Richard Attenborough’s Gandhi (1982), but only if you want to watch some serious stuff.

That is all we have the time for today.

We will be back on Monday. Have a good weekend.

Also Read: How private are your WhatsApp chats?

#Gandhi Jayanti, #Rape, #Hathras horror, #Hathras
The views and opinions expressed in this article are those of the authors and do not necessarily reflect the official policy or position of DailyO.in or the India Today Group. The writers are solely responsible for any claims arising out of the contents of this article.