104 calls were exchanged between the main accused and a phone registered in name of the brother of Hathras victim.

Rhea Chakraborty has been granted bail but to get out of jail using her bail granted by the Bombay High Court, Rhea has to do, not one, but five things: present herself at the nearest police station every day for 10 days, deposit her passport, promise to not leave the country, promise to not meet any witnesses in her case, and deposit Rs 1 lakh. Rhea Chakraborty has been granted bail, but Showik has been denied the same. (Photo: ANI)

Relief for Rhea has brought relief to many, who believe Rhea has been wronged, but not her brother Showik. The court turned down Showik’s bail plea even as it accepted the bail pleas of Samuel Miranda and Dipesh Sawant. In some more relief for Rhea, the CBI is now only probing the suicide angle because the fund siphoning angle taken by Sushant Singh Rajput’s family has fallen flat. Things fall down and not up is proven, but that things fall flat and not round is not proven. It is just a way of saying.

US President Donald Trump isn’t saying for the sake of saying, but is totally gearing up for the Presidential debate on October 15 with Joe Biden. No American would want to be Joe Biden right now, including Biden himself because Trump had tested positive for Covid-19 on October 2. 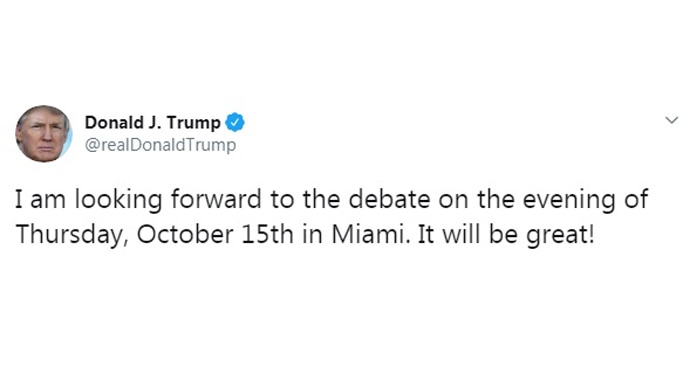 Being near an infected person unknowingly is one thing but to be near an infected person knowingly is another. Biden has placed his hope in the scientific community saying if scientists declare it safe to be near Trump, he would participate in the debate. Trump, on his part, has shown as much care for science as he does for the mask. Since Trump won’t opt for the mask, Biden should consider the PPE kit for October 15.

There is no escaping a debate in US elections because that is when the fence-sitters are believed to decide which side to rest with. The first such debate took place in the 1960 election between John F Kennedy and Richard Nixon. Of the 179 million US people then, about 66 million are said to have watched it. But the most-watched US presidential debate was the first one between Donald Trump and Hillary Clinton in 2016. As many as 84 million people are believed to have watched it. These are TV numbers so they do not cover how many watched the online streaming. Over the years, people in other countries have also started watching US debates. Would Trump have recovered by then depends on whether he tests negative, which depends on whether he decides to take a second test. In India, it is not mandatory for people to show they have tested negative after they have tested positive. People can be discharged from hospitals and set free from home quarantines if they have no fever and no additional symptom of the disease 14 days after the onset of symptoms. In some states even 10 days is fine.

The government says even if such people test positive they are unlikely to infect others because they have recovered. That which is unlikely is not likely to happen but may still happen. Chance to hai.

But what is recovery if positivity is still around? Recovery, the Word Of The Day, comes from the English word recover which comes the French word ‘recovrer’. Recovrer means to get back. When you get back from an illness, you have recovered. When more people recover from coronavirus than are infected, experts declare the disease as declining.

Experts also say one-third of hospitalised Covid-19 patients recovering from the disease showed signs of brain malfunction. Whoever thought the worst is over and they have seen how bad it can get – think again, look again.

A study published in Annals of Clinical and Translational Neurology says one in every three of Covid-19 patients at a hospital in the US experienced varying kinds of altered mental functions. The altered functions included confusion and delirium.

Confusion can cloud healthy brains too, but the confusion in AIADMK is over who will be the party’s candidate for the Chief Minister’s post in 2021. OPS has okayed EPS’s name. Remember for that first the party has to win elections. AIADMK has been in a state of confusion over the question even since J Jayalalithaa passed away in December 2016.

Prime Minister Narendra Modi, meanwhile, has been in the office uninterrupted since 2001 when he was first appointed Chief Minister of Gujarat. He was sworn in on October 7 that year. This year today, it has been 20 years of being in office as the Chief Minister and Prime Minister for Modi.

In the office of the Chief Minister of Uttar Pradesh, Yogi Adityanath is going after the opposition. Yogi has maintained that the incident was used by the opposition to foment trouble. But a twist in the case has come from call data records. Records show the victim was in touch with the main accused Sandeep Singh. 104 calls were exchanged between Singh’s phone a number registered in the name of the victim’s brother since October 13, 2019. If it wasn’t the victim, who was talking to the accused from the victim’s family? The family says they don’t know and that no call happened. Could that be AI? Phone picking up phones, dialling numbers and talking.

That could be Physics or Chemistry, or we don’t know what, but the Nobel for Chemistry has gone to Emmanuelle Charpentier and Jennifer A Doudna for development of a method for genome editing.

We got to talking about Nobel prizes because we were talking about Physics and Chemistry without knowing what applies to the Hathras case but the investigators have turned the spotlight on the case to find out all answers – apparent and hidden.

No matter what the answer, protests inconveniencing the public are out of question said the Supreme Court on the Shaheen Bagh protests. The court also said that it for the government to end such protests and the SC shoulders should not be used for such causes. So people should not protest in the middle of roads and public places and if they do so the government should ensure an end to such protests.

If you want a break from all things under the news spotlight, you can turn to Tom McCarthy's Spotlight (2015), a film based on how Martin Baron joined the Boston Globe as an editor and pushed four journalists named Michael, Walter, Sacha and Matt to pursue a story about the child molestation charges against the local church. That story left US shaken.

#Donald Trump, #Sushant Singh Rajput, #Rhea chakraborty, #Hathrasprobe
The views and opinions expressed in this article are those of the authors and do not necessarily reflect the official policy or position of DailyO.in or the India Today Group. The writers are solely responsible for any claims arising out of the contents of this article.