DailyOh! From SIT, to ED, to CBI, what UP govt is probing in Hathras, to the asteroid passing us by at 7 km/sec

UP government blames a website for fanning protests and wants Supreme Court to monitor probe.

It started with an SIT probe, it has been topped with an ED probe, and now it has been laced with demands for the SC-monitored CBI probe, but it’s not the Sushant Singh Rajput case probe. The probe in question is the Hathras alleged gang rape and murder case probe. The UP government has asked the Supreme Court to order a CBI probe because “vested interests” of international stature are trying to derail the ongoing probe.

Who is the ongoing probe going on with? A three-member Special Investigation Team. So, what exactly is the ED doing in this probe? The ED is examining the FIR registered against a website for fanning the protests in Hathras. The probe is trying to unearth who funded the protest-fanning website. Mumbai Police, from whom the probe into Sushant Singh Rajput’s death case was taken away, is, in turn, probing over 80,000 fake social media accounts that were set up after the actor's death.

A miffed Mumbai Police has registered two FIRs for posting abusive comments against Ma.Po.Se. The other charge in the two FIRs is spreading misinformation on Sushant's death.

Now, the FIR is against unknown people. The investigation into thousands of these fake accounts could give names to some of these unnamed people. When they get names, they may also get punishment.

The reason Mumbai Police thinks the accounts are fake is that most of them sprang up between June and August.

The reason scientists think you should wash your hands for a full 20 seconds is that the Wuhan virus can last on your skin for 9 hours. But if you opt for an alcohol-based hand sanitiser, 15 seconds of rubbing would do the trick.

The World Health Organisation says one out of ten people in the world did not do that and hence have been infected by the virus already. These aren’t just WHO’s ordinary estimates, but its best estimates. There is no way of knowing if the person you are meeting is person number one or part of the nine. 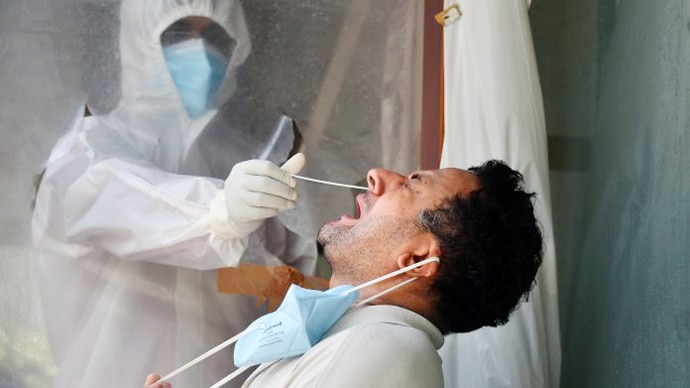 WHO believes 1 in 10 people have been infected with the coronavirus. (Photo: Reuters)

So think of everyone you meet as an active carrier of the infection and understand dooriyan bhi hain zaroori but sabse zyada zaroori is your mask. There are more cases than being reported.

How many more is difficult to say because it is not being reported. In the UK, data on 16,000 Covid cases went missing because the Excel spreadsheet didn’t have enough columns to accommodate the data.

While coronavirus cases are rising beyond Excel sheets because the virus is infectious, accidents are rising across the Atal Tunnel connecting Leh and Manali because selfie is supreme. Border Road Organisation officials say that people have met with accidents while trying to click selfies in the tunnel. Do click selfies, but it is recommended you save yourself to post those selfies too. Talking of accidents, Afghanistan batsman Najeeb Tarakai, who met with an accident on October 2, died today. Tarakai had undergone surgery after the accident, but he couldn’t be saved.

While doctors failed to save Najeeb, criminal counsel Satish Maneshinde failed to secure a bail for Rhea Chakraborty, which now means that she will be in jail till October 20. Rhea’s brother Showik will remain in jail too, where both have been staying since September 8.

Rhea can’t get out of jail but an asteroid moving at a speed of about 7 km per second will whizz past the Earth tomorrow at 10.42 pm. The asteroid is estimated to be bigger than a Boeing 747 airliner wingspan. If you are expecting some boom-boom, that’s not going to happen because there will be no bang-bang. The asteroid will zoom past the Earth at a distance of 38,30,238 km, so you won’t get to see or hear it go by.

The asteroid seems to be in a hurry to get somewhere. Our guess is it must be going somewhere important otherwise why would it gallop 7 km each second?

We may not understand the need for the asteroid to be rushing around in the universe, but Akshaye Khanna understands why his father Vinod Khanna left him to join the Rajneesh movement in 1970s when Akshaye was just a five-year-old. Akshaye believes that his father must have left because he was moved to leave from within. Atma ki aawaz.

But the crucial question is why did Vinod Khanna come back after being so moved to move?

But why are we talking about Vinod Khanna today? Because it is his birth anniversary. Now, that we are dealing with Bollywood, let us quickly tell you what actor Parvathy feels about Karan Johar's upcoming film on India's Independence – ‘yuck’. She has stamped Johar’s post announcing the movie and tagging the Prime Minister with that four-letter word which is very similar in sound and spirit to another four-letter word, which we will not spell out here.

Here we will limit ourselves to talking about yuck, our Word Of The Day.

Yuck is not just a word, but a wholesome feeling. You don’t need more words to accompany 'yuck' to convey your emotions. Oxford dictionary still describes yuck as a word “used to show that you think something is horrible”.

To be precise yuck is an exclamation of disgust. It is believed yuck originated in Newfoundland as a slang for puke. If you feel yuck about something it is like what you feel when you see puke.

The graphic details that you are getting right now in your head are a work of your imagination triggered by our explanation. If you insist, we apologise and leave yuck at that.

The trailer of Mirzapur 2 is out. The series will be on air this October 23. So get ready for a lot of blood, gore and gaali.

If this is not your idea of entertainment, you can retire to your room with TM Krishna’s A Southern Music: The Karnatik Story. You can simply listen to Krishna too because you are free to do whatever you want to do.

For now, we want to call it a day.

Also read: Daily Recco, October 5: Breadizza, for the love of pizza with the convenience of bread

#Atal tunnel, #Sushant Singh Rajput, #Mumbai Police, #Hathrasprobe
The views and opinions expressed in this article are those of the authors and do not necessarily reflect the official policy or position of DailyO.in or the India Today Group. The writers are solely responsible for any claims arising out of the contents of this article.