Has the health budget 2020 missed the priorities?

A low share of allocation to health in this year’s budget will impact the public spending on health.

Allocating 2.5 per cent of GDP for health as envisioned in the National Health Policy 2017 remains elusive when one looks at the budgetary provisions for the current financial year. Budget allocations to health are Rs 69,233 crore in 2020-21 — merely a four per cent increase compared to the previous year’s budget estimate.

This increase, however, is insignificant when adjusted to inflation. An intra-allocation shows Rs 65,011 crore is for health and family welfare department, and approximately Rs 2,100 crore each for Ministry of AYUSH (Ayurveda, Yoga, Unani, Siddha, Homoeopathy, and naturopathy) and health research department. Overall allocation to health constitutes a meagre 2.28 per cent of total government expenditure in 2020-21. Such a low share of allocation to health in this year’s budget will further impact the public spending on health (combined union and state spending) which stands at 1.18 per cent of GDP. 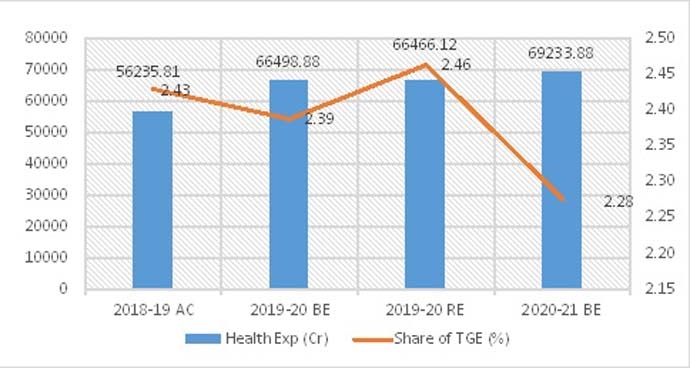 Overall provision for the centrally sponsored schemes, including National Health Mission, Human Resource for Health, Tertiary Health Care programmes did not witness any major hike and the total budget allocation is Rs 39,839 crore in 2020-21 compared to 39,551 crores in 2019-20 budget estimates. These centrally sponsored programmes have a bearing on the state financing health, as both — union and state governments — expend resources for these programmes on a sharing basis, with a lion’s share from the Centre.

Further, in the current fiscal year, the state’s finance will observe a jolt with the Centre’s revenue earnings being decelerated by the sluggish economic growth. This will especially hit the resource-starved states. Moreover, the allocations to the National Health Mission (NHM) is Rs 33,400 crore in 2020-21, as compared to Rs 32,994 crore in the previous budget — only Rs 406 crore higher than the last budget.

NHM is one of the crucial flagship schemes of government of India and India’s rural health especially, maternal and child health indicators, showed perceptible improvements since the last decade for the successful implementation of NHM. The improvements were observed in most of the low performing states — Odisha, Rajasthan, Chhattisgarh and Madhya Pradesh — which were tagged as laggard states. The health gains witnessed in these states should further focus on bridging the gap across social groups and regions with elevated resource allocation and spending. Shifting priority at this stage may not augur well for rural health systems of the country.

A major hike in the allocations in 2020-21 is observed on Pradhan Mantri Swasthya Suraksha Yojana (PMSSY), the objective of which is to bridge the gap in the availability of affordable tertiary healthcare services across states. Total allocation to PMSSY is Rs 6,420 crore, a hike to the tune of Rs 2,420 crore from the previous budget estimate. 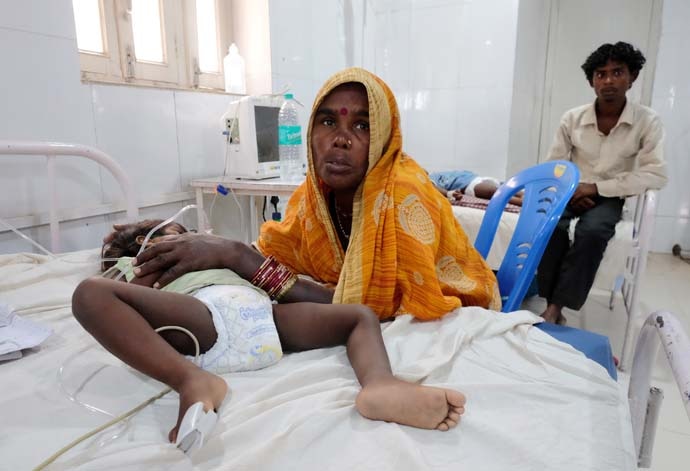 India’s tag as a low public financier for health is one of the reasons for the debilitating public health system of the country. (Representational photo: Reuters)

Allocation to PMJAY, a mega health scheme launched in 2018, has remained constant at Rs 6,400 crore, similar to 2019-20 budget estimates. PMJAY has been considered as ‘mover and shaker’ of the health sector, which now draws attention from the top political echelons of the ruling dispensation. This scheme is paramount as it seeks to cut out pocket expenditure which constitutes 64 per cent of total health expenditure, by giving financial protection up to Rs 5 lakh for secondary and tertiary care hospitalisation to 100 million households, approximately 500 million people.

At the same time, another pillar of Ayushman Bharat — health and wellness centre, that provides healthcare access to the economically-backward and weaker sections of the society and strengthens primary care by reinvigorating the sub-centres in the country, should not be misplaced. The budget allocation to health and wellness centres is Rs 1,350 crore in 2020-21, which has not changed compared to 2019-20 revised estimate.

Strengthening health and wellness centres, which intend to provide outpatient care, immunisation, maternal and child health services and non-communicable diseases will help to ameliorate many basic health problems including early diagnosis and treatment of NCDs, avoiding complications in the latter stage and thereby, lessening costs of treatments. The success of PMJAY in terms of reduced hospitalisation rests on the comprehensive primary care and enough emphasis should have been given to this component in the budget.

The budget announcement to extend service coverage under PMJAY to aspirational districts by establishing hospitals through PPP (public-private partnership) mode especially, where there are no empanelled private hospitals, is a step to inspire private hospitals to operate in these remote locations. This may encourage some as there is viability funding window however, equally important is to strengthen district hospitals in these areas.

Health is one of the important pillars of Caring India programme announced by Union finance minister Nirmala Sitharaman. The priorities should not be out of place, as the healthcare challenges are manifold.

In 2018, the announcement of PMJAY brought health central to political discourse. The momentum should not be halted and public financing should be stepped up so that achieving the target of public spending to 2.5 per cent of GDP becomes a reality soon. India’s tag as a low public financier for health compared to many developing and developed countries of the world should be reversed, as this is one of the reasons for the debilitating public health system of the country.

Also read: Can India put an end to its public health crisis?

#Ayushman bharat yojana, #Pmjay, #Public health, #Budget 2020
The views and opinions expressed in this article are those of the authors and do not necessarily reflect the official policy or position of DailyO.in or the India Today Group. The writers are solely responsible for any claims arising out of the contents of this article.