India Today Editor-in-Chief Aroon Purie talks about the special issue, The Rebirth, that carries forecasts on the big trends in 2021, in the January 18, 2021 edition of the India Today Magazine.

If 2020 was the year that changed everything, 2021 begins with many questions about what lies ahead. We are trapped between a pandemic that is still raging in many parts of the world and the promise of a postpandemic world with the launch of several Covid-19 vaccines. This is a hopeful beginning for the new year, especially with two vaccines cleared for use in India. As we know, the vaccine is not a cure for Covid-19, only a means to slow the spread of the virus. It will be at least two years before a large percentage of the global population is vaccinated. We are, therefore, now in a twilight zone with the pandemic. 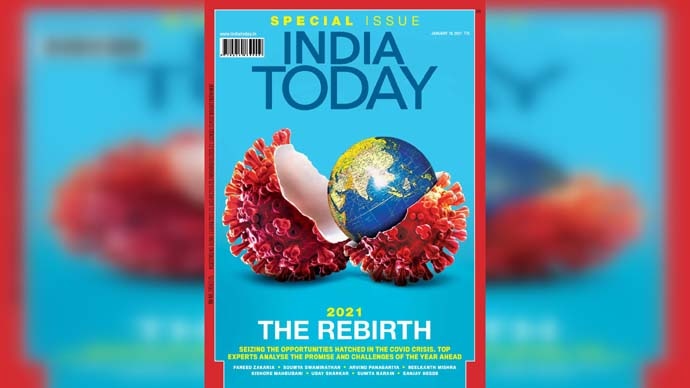 What are the contours of this new world and, more importantly, what does 2021 have in store for us? We asked 10 experts to do some crystal-gazing. Our special issue, ‘The Rebirth’, curated by Managing Editor Kai Friese, carries their forecasts on the big trends in health, economy, environment, entertainment, politics and national security.

Among our biggest learnings from the pandemic have been those in healthcare. Soumya Swaminathan, chief scientist at the World Health Organization, argues that India needs to hike its investment in health from 1.5 per cent of the GDP to at least 2.5 per cent. It needs to strengthen the system of primary healthcare centres, use digital tools and technologies to deliver quality healthcare services and raise a separate public health cadre. She also says top-down orders work only for a while and, citing the example of Dharavi, says communities need to be part of the solution. The government’s biggest priority this year will be to revive India’s economy, the worst-hit among the world’s big economies. Barring agriculture, the four vital engines of the economy—domestic consumption, government expenditure, private investment and exports—are sputtering. The government will need to step up its efforts to nurse the economy back to health in the face of a global economic slump. Neelkanth Mishra, co-head, APAC Strategy, Credit Suisse, feels that despite strong policy measures, the global economy, barring China, is not expected to return to pre-Covid levels until 2022. Professor Arvind Panagriya of Columbia University recommends the setting up of a disinvestment ministry for aggressive privatisation of PSUs to shore up the government finances and give cash transfers to the rural and urban poor to the tune of 1-2 per cent of the GDP. Kishore Mahbubani, distinguished fellow at the Asia Research Institute, believes that the ‘great game’ in the 21st century is an economic rather than military contest and makes a case for India to enter and participate in global groupings like the RCEP rather than waiting on the sidelines. Competition, he argues, leads to short-term creative destruction but long-term economic strength. If you want diplomatic clout in the world, you need to build your economic muscle.

One of the more welcome changes in the year gone by was the clean air we all breathed when our cities were locked down. It was a warning: we neglect the environment only at our own peril. Could climate change be the next wake-up call? The exit of Donald Trump and President Joe Biden’s entry means the US will now rejoin the 2015 Paris Agreement to undertake emission reductions. Environmentalist Sunita Narain urges nations to ensure clean air benefits in areas ranging from energy to mobility transformation.

Group Editorial Director (Publishing) Raj Chengappa surveys India’s political landscape and argues that 2021 would see a move towards a centre-right ideological position in which national identity, pride and security dominate, combined with the unique blend of welfarism and capitalism, rather than regional and caste forces. This would be especially so if the BJP wins the upcoming West Bengal assembly poll. On the other hand, if Mamata Banerjee is re-elected chief minister, she will be in line to head an Opposition coalition to take on the BJP in 2024.

Senior advocate Sanjay Hegde takes a critical look at the state of our Republic. Silence in Parliament, he says, seems to have shifted public discourse to the streets. The government and its critics need to stop shouting at each other and make fresh beginnings. Rulers and citizens need to go back to talking to each other rather than at each other. We need to be a less angry nation, and 2021, he hopes, will be the year for resets and dialogue.

With the pandemic, an enforced revolution took place in the media and entertainment space. Uday Shankar, president of the Federation of Indian Chambers of Commerce & Industry (FICCI), writes that ‘media morphed from being a creative-only enterprise to a tech-driven creative enterprise’. He says this sector’s future will be scripted by a new generation of entrepreneurs who invest in both content and technology.

Author and journalist Fareed Zakaria distils his bestselling book Ten Lessons for a Post-Pandemic World to give us five broad learnings for 2021: the public need to be cushioned against shocks like the pandemic; inequality will worsen; Covid-19 will accelerate the digital revolution; globalisation will not die, just pause and it can perhaps lead to decoupling from excessive dependence on China; and the post-American world won’t be one dominated by China but a multilateral world.

However, China presents strategic challenges, and no one knows this better than India, which is dealing with a belligerent Beijing on its borders. Executive Editor Sandeep Unnithan explains how despite a budgetary squeeze, the Indian military needs to reform and modernise its war machine to deter China and its ally Pakistan.

As the saying goes, the future is not an upgrade of the present but an invitation. Let’s accept that invitation and, with the dynamism, energy and innovation that nations across the globe have shown in this crisis, make the world a better place.

(India Today Editor-in-Chief's note for the cover story, The Rebirth, for January 18, 2021)

#India today magazine, #Economy, #Health, #Covid19
The views and opinions expressed in this article are those of the authors and do not necessarily reflect the official policy or position of DailyO.in or the India Today Group. The writers are solely responsible for any claims arising out of the contents of this article.