Holika Dahan: The age-old custom of dispelling evil, both around and inside us

Smearing clothes with violent colours and intoxicating oneself is believed to invoke the demons within. It is only then that they can be exorcised. And Holi thus ends peacefully with a soothing bath and pristine white.

The best-known story of the Holika goes back to the legend of the demon king, Hiranyakashyap, who demanded sole devotion from everyone in his kingdom. But his son, Prahlad, was an ardent devotee of Lord Narayana and refused to worship his father. Enraged, Hiranyakashyap tried to kill Prahlad many times over — but each time, divine intervention from Lord Vishnu saved him.

Finally, thinking of a scheme, the king asked his sister, the demoness Holika, to enter a blazing fire with Prahlad in her lap, knowing that Holika had a special power — by which she would always remain unscathed by fire.

Legend says, however, that it was Holika who was consumed by the flames — and Prahlad walked out unscathed, chanting the name of Narayana.

Holika was not aware that her powers worked only when she entered the fire alone. Legend says, Holika was consumed by the flames — and Prahlad walked out unscathed. (Source: YouTube screengrab/DailyO)

The lighting of the Holika fire is an annual ritual across our country. Huge bonfires are lit with images of Holika in the middle. And as the flames rise high against a darkening sky, wads of cow dung and sticks are often tossed in by onlookers while they shout loudly, as if annihilating the demoness. In some places, people carry a little of the bonfire back to their houses, as it is believed to cleanse and purify the abode and those who live there.

That is the most popular version of the Holika burning.

But behind this — entwined in magic and mystery — there lies another past, which most do not know about.

Hidden roots of the Holika

The pagan tradition behind the Holika finds mention in old journals of the Asiatic Society. In olden times, the Holika festival had been termed the Saturnalia or the Carnival of the Hindus. It is said that verses — often obscene — were read, parties of men walked the streets, dressed in filthy clothes, splattered with reddish dye, dirt thrown on them as they went by. There was wild rioting in the streets, it is fabled as per. 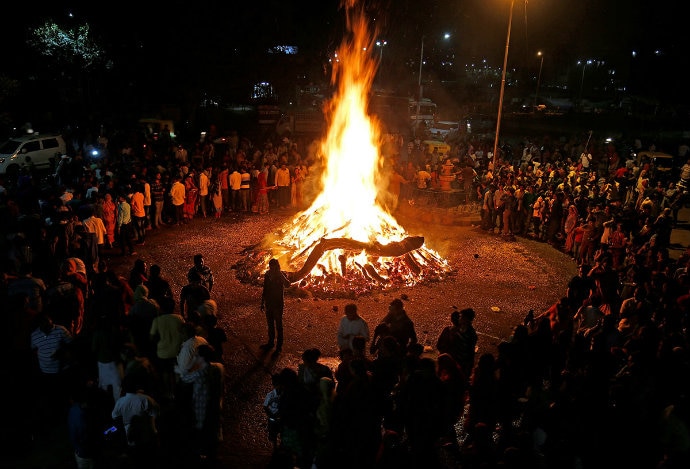 The circular hole of Holika is supposed to encase a house and those who live there with a sacred glow. (Source: Reuters)

For the Holika worship, a circular hole was dug in the ground and filled with wood and cow dung. A green tree — generally castor oil — was planted and grass heaped about. Coconuts were offered and prayers said, facing the East. Finally, the hole was set on fire. Here too, Holika is said to be a demoness — Dhunda — killed by Mahadeva.

At her death, she was given the boon of being worshipped one day in a year in this manner.

Caging evil — and beating it

The use of the castor oil plant has a history going back to tribal customs of south India, where rakshasas were said to be driven away with the use of the stalks of this plant. Indigenous to Africa and cultivated in India, China and Brazil, this plant has a history which dates back to the time of the Pharaohs of Egypt, in whose tombs they were also found. The planting of the green castor oil tree in the pit would have been to beat the evil and keep it caged within, till the fire purged it.

Even today, if, at the time of Holi, you bring a new castor oil plant into the house, it is supposed to banish evil and keep away dark influences. 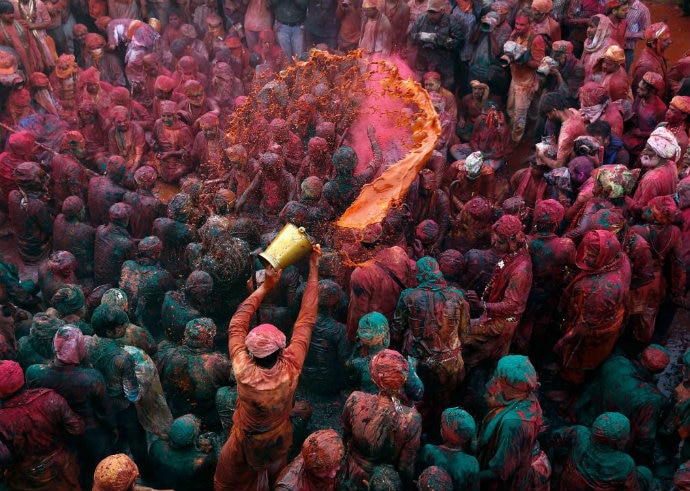 The old custom of wearing dirty clothes and intoxicating oneself was said to invoke the demons within. (Source: Reuters)

It is a night of the burning away of evil. Of destroying darkness — it is indeed strange how the name of the demoness, Dhunda, also stands for fog, blindness and an inability to see.

As the fire burns, it is also said to cleanse the mind and the spirit, bringing back clarity to the supplicant’s life. It is said that on the night before Holi, if you light a small fire in a round vessel in your home, it will bring protection and take away darkness. It could be a round cast iron bowl, a little cauldron, or even an earthen pot — but the shape must be round. For as the fire burns within, it is supposed to create a circle of protection, encasing the house and those who live there — with a sacred glow.

Extinguishing the demons within

At this time of the full moon, when the Holika is burnt, the darkest side of one is believed to often come to the fore. The old custom of wearing dirty clothes, smeared with filth, and intoxicating oneself, was said to invoke those demons within. Smearing the clothes with violent colours and shouting obscenities was said to give vent to the darkness within on this night — for, as the ritual is often described, it is only then that these can be exorcised.

That is why a cold bath after playing with colours and the wearing of pristine white is supposed to complete the cleansing and the purification associated with Holi.

#Holi customs, #Holi traditions, #Holi celebration, #Holika dahan
The views and opinions expressed in this article are those of the authors and do not necessarily reflect the official policy or position of DailyO.in or the India Today Group. The writers are solely responsible for any claims arising out of the contents of this article.