Nothing prevents the Hindu Right in India from reinventing itself.

Legalising or decriminalising same-sex relationships and marriage is not easy. This, in many ways, is the mother lode of all prejudice - a fundamental disagreement among human beings about sex and procreation. The question is elemental: why do we criminalise people who are born or choose to be a certain way? Are they harming themselves? Are they harming society?

So far, this has been an unexpectedly good year for the LGBT community. The previously sealed envelope of same-sex relationships is now an open letter, which is being signed by countries around the world. This has, for the first time, transcended the traditional political cleavages of right and left, and caused some discomfort along the way. But make no mistake—the gay juggernaut is rolling, steadily and not so slowly.

On Friday, in a surprise move, Germany became the latest country in Europe to legalise same-sex marriage. While the chancellor Angela Merkel voted against it, she allowed her lawmakers to vote in “accordance with their conscience.” This also paves the way for gay couples to adopt.

Brian Finnegan, the editor of Gay Community News in Dublin, said: “It is a sign of how much Ireland has changed and moved on that no one really cares if he is gay here.” Varadkar himself said: “If my election today shows anything, it is that prejudice has no hold in this Republic.” 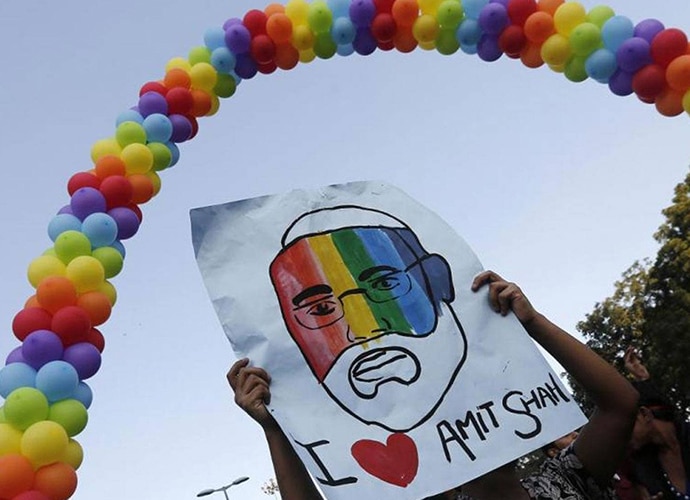 Meanwhile, in May, Gauthier Desteney, the husband of Luxembourg Prime Minister Xavier Bettel, mingled with the spouses of world leaders at the NATO conference in Brussels and posed for a photo with a grim-looking Mrs Erdogan. The Daily Mail gleefully headlined the story: “The first gentleman! Husband of Luxembourg's gay Prime Minister joins the NATO WAGs including Melania Trump and a none-too-happy-looking devout Mrs Erdogan.”

Back in Ireland, Varadkar sought to reassure his boyfriend, saying that a generational shift was taking place in political life which did not require his partner to attend official engagements: “I think that would be part of the generational shift in politics, because traditionally you had a male leader, a wife who had given up her job. We are now moving into an era across the world where men and couples have their own careers.”

Another fascinating shift has taken place amongst the far right parties of Western Europe. In France, Marie Le Pen expelled her own father from her party for his homophobia and anti-semitism. She packed her inner circle with out-of-the-closet gay advisers and party leaders. Le Monde wrote: she is “trying to erase another image that has stuck to the skin of the FN – that of homophobia”. A survey showed her share of the vote among married gay couples in the 2015 regional elections being over 32 per cent – up from just 19 per cent in a similar poll from 2012.

It was the assassinated Dutch far right leader Pim Fortun, gay himself, who was the first to start appropriating the symbols of the liberal-left, forging a new discourse of the right. In elections this year, his ideological successor, Geert Wilders, took the same line: homosexuality was a Western civilisational value that had to be protected from the common enemy: the hordes of Muslim immigrants, a clear case of the enemy of my enemy is my friend.

Also in May, and closer home, Taiwan became the first country in south Asia to legalise same sex marriage, with its highest court approving of it.

This brings us to India and the present. When the Supreme Court decriminalised homosexuality there was no public outrage. Unfortunately, that order was repealed by an outgoing conservative judge. Nothing prevents the present government from taking up the cause. If one looks at the European right, it has, in the words of Sasha Polakow-Suransky, effectively rebranded itself: “They have made a very public break with the symbols of the old right’s past, distancing themselves from skinheads, neo-Nazis and homophobes. They have also deftly co-opted the causes, policies and rhetoric of their opponents....and sought to outflank the left.”

Nothing prevents the Hindu right in India from reinventing itself too. The BJP can bravely fight this battle, which no political party has been willing to fight for our LGBT community. It will give its saffron Hindutva a liberal halo and stun its opponents. The world is changing and social attitudes shifting rapidly. The time is here.

Things are dire in our neighbourhood. In Aceh, in Indonesia, gay men are flogged publicly, while South Korea has launched an alleged witch-hunt against the LGBT community. In contrast, nationalist India can become a beacon for progressive humanism in south Asia. As a placard at the Gay pride march in Delhi famously said: “Hindu-Homo, Bhai, Bhai.”

(A version of this article appeared in Mail Today.)

Also read: Shame Virat Kohli has no respect for legends like Anil Kumble without a strong BCCI

#Hinduism, #Gay rights, #LGBTQ, #Section 377
The views and opinions expressed in this article are those of the authors and do not necessarily reflect the official policy or position of DailyO.in or the India Today Group. The writers are solely responsible for any claims arising out of the contents of this article.