India Today Group Editor-in-Chief talks about why the threat to citizen rights and civil liberties is mounting, in the November 18 edition of the India Today Magazine.

In his seminal 1859 essay 'On Liberty', the English philosopher John Mills outlined three dangers to an individual's personal freedoms. The oldest of which was the tyranny of the one over the many. A newer form (at the time) was the rule of the many over the few; in other words, the tyranny of the majority, which democracies are increasingly becoming subject to. The third was the rule of custom and tradition, which straitjacketed individuals and forced them to conform. Mills' concerns have persisted over the years and continue to manifest themselves even today, 160 years later.

The 21-month Emergency between 1975 and 1977, where personal freedoms were suspended, the opposition jailed and the press muzzled, was our democracy's darkest hour. It was a reminder of why the world's largest democracy could not take its freedoms for granted.

Since that time, the Indian state has quietly but steadily accumulated powers that have made the Indian citizen ever more vulnerable to its might. This when the state is supposed to be an enlightened guardian of the interests of all citizens. In fact, in democracy, the state is an organisation to whom the citizens voluntarily give their powers in the expectation it will govern for their benefit. Of course, it does not always work that way.

The Indian citizen, it could be argued, is more vulnerable today than he or she has ever been since the Emergency. Some of these vulnerabilities are already exposed and in plain view, while others lurk around the corner.

Our special issue — 'The Vulnerable Indian' — curated by Managing Editor Rajesh Jha, addresses these fears. We called upon a wide-ranging panel of guest writers - lawyers, political scientists, sociologists, media-watchers and journalists - to examine the impact of some emerging political, social and economic trends. A few broad themes emerge from these essays. 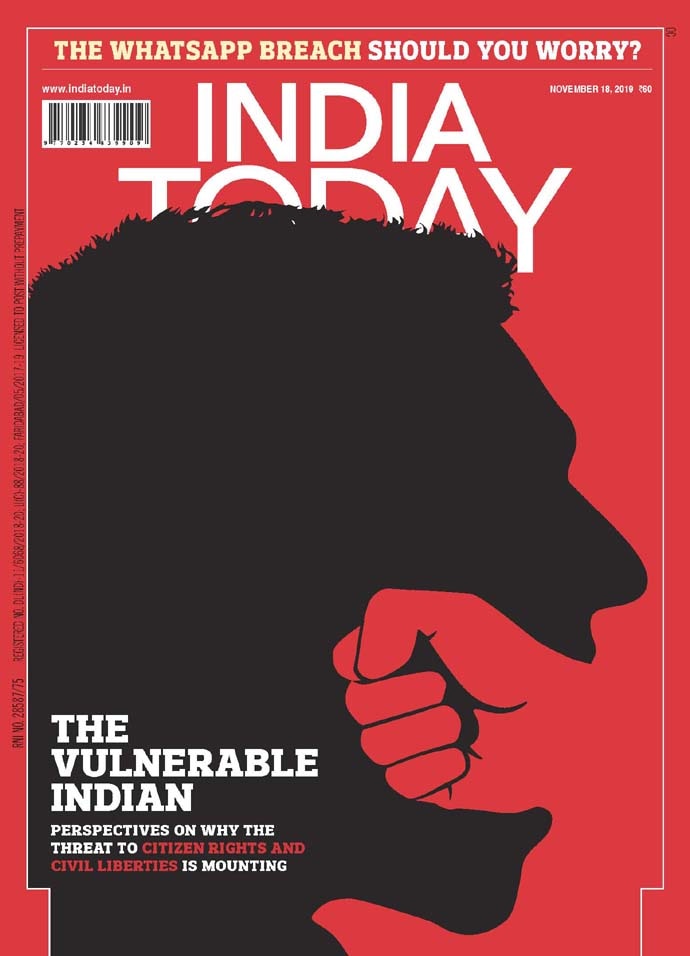 India Today November 18 cover, The Vulnerable Indian: Perspectives on why the threat to citizen rights and civil liberties is mounting.

After Independence, India did not jettison many of the laws created by the British Raj, which were originally designed to suppress the freedom of speech and expression of its colonial subjects. So, even while it guaranteed Indian citizens freedom of speech and expression, the Constitution did not restrict the remit of the state's powers to clamp down on its own citizens when it so wished. Repressive laws that criminalise speech and grant the police sweeping powers without adequate accountability are still in use. In the span of just one week this June, eight people, including journalists, were arrested in four states for social media posts against political leaders. Worse, judicial oversight of police actions is poor. All this has contributed to a chilling atmosphere, where holding and expressing an unpopular opinion, even one that is legally acceptable, is to make oneself vulnerable to legal action.

Information and communications technology is now, undoubtedly, a double-edged sword. It has connected us and empowered us, but also divided us. With the widespread growth of social media, we have seen the birth of troll armies which impede free expression. Data collected from various sources can even game democracies, as happened in America. The digitisation of the economy has also meant that it is easy to invade an individual's privacy in the name of security. As we saw recently, a social media platform was used to tap the phones of a wide range of people, from journalists to human right activists to politicians. The agency which invented the software says it sells only to states.

Another weapon in the state's hand is harassment over tax collection. There is no defence for tax evasion. Those guilty of it should certainly be caught and punished. However, when such action becomes partisan, it is tantamount to tax terrorism. Targets are now being selected to settle political scores. The many recent examples show that this tendency is on the rise.

The government today is fully weaponised, and ill-intentioned leaders can use this power for nefarious purposes. The independence of our institutions, the judiciary and media, which provide checks and balances to an overreaching government, needs to be protected. Therefore, we need to ensure we never take individual freedoms for granted but contest actions that trample upon them. Eternal vigilance is the price we have to pay for our liberty.

(India Today Editor-in-Chief's note for the cover story, The Vulnerable Indian, for November 18, 2019.)

Post your comment
#Emergency, #Freedom of Speech, #Civil liberties, #Citizenrights
The views and opinions expressed in this article are those of the authors and do not necessarily reflect the official policy or position of DailyO.in or the India Today Group. The writers are solely responsible for any claims arising out of the contents of this article.