Weird things can happen at Indian weddings. Like someone getting angry over food, baraatis lying on the dance floor and so on. There is more. Some also end up marrying the wrong person.

Weddings give you so many memories to cherish. Some of them are good while others can make you go ROFL. Indian weddings are an extravagant affairs and a few mishappenings are bound to happen.

Smalll things like wardrobe malfunction or extra salt in the food is fine, but there have been incidents where people ended up marrying the wrong person. Yes, it is too weird to be true.

Shockingly, many such incidents have been reported till date.

If you still think that I am bluffing, here are five incidents from the past when people married the wrong person because of some bizarre reasons.

This incident took place in Madhya Pradesh on Sunday. Two sisters from Ujjain, Madhya Pradesh, were supposed to get married on the same day, at the same venue.

Nikita and Karishma wore the same dress for their big day. As the brides were in veils, and there was a power cut, an unwanted mix-up happened and they got married to each other’s grooms.

The family rectified the mistake by making them marry the right man the next day. Due to power cut the grooms tied the knots with the wrong sister. Photo: IndiaToday

2. THE GROOM GOT DRUNK

In April, a couple was ready to tie the knot.

The groom decided to celebrate his day a little extra and got drunk. The ceremony was supposed to happen at 4pm on April 22, but the groom reached the venue at 8 pm because he was drunk and busy dancing.

The bride and her family got super annoyed and decided to cancel the wedding. The bride then tied the knot with a relative on the same day.

So, the big lesson here is: Don’t get drunk on your wedding day. 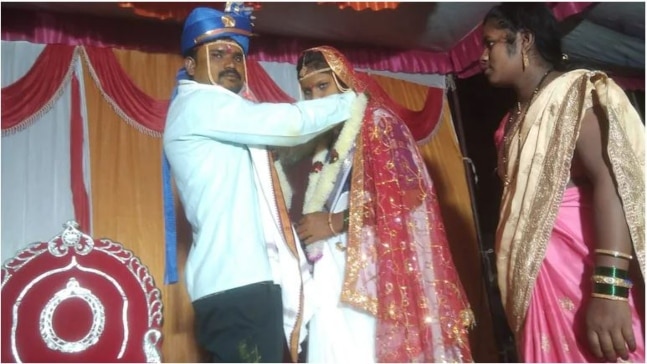 The bride's family cancelled the wedding because the groom got drunk and late for the ceremony. Photo: India Today/Zaka Khan

In another incident from Kanpur, Uttar Pradesh, the bride ended up marrying a wedding guest.

So, this happened after the groom went missing.

The groom was there, the bride was there and everything was going smoothly. Soon after the jaimala ceremony, the groom was nowhere to be found at the wedding venue.

Then someone suggested that the girl can marry a suitable baraati. Luckily, she found a suitable match in the baraat and tied the knot.

Unfortunately, the wedding day became the last day for this bride from Uttar Pradesh.

In June 2021,  the bride and the groom were about to begin their pheras. But soon after the jaimala, the bride collapsed. She had a heart attack and was declared dead.

But the wedding ceremony continued. Both the families decided that the bride’s sister would wed the groom.

The ceremony took place on the spot with the actual bride’s dead body in next the room.

In December 2021, a man decided to avail the benefits of Mukhyamantri Samuhik Vivaah Yojana in Tundla in Firozabad, Uttar Pradesh. Under the scheme, the bride receives Rs 20,000 in her bank account and gifts worth Rs 10,000.

To reap these benefits, the man decided to tie the knot with his sister. Around 51 couples got married that day at the Tundla Block Development Office. And then people identified that the bride and groom are brother and sister.

Later, an FIR was filed against the brother-sister duo.

So, if you think, a bride accidently falling into the swimming pool is the craziest thing that can happen on a wedding day, we’ve just proved you wrong.