Is India’s judiciary in the dock: What Indira Jaising and Pinky Anand have to say

While the renowned lawyer said SC was ‘sitting on a volcano’, the ASG asserted the top court was ‘incorruptible’.

Jaising said corruption went beyond “purchasibility” of judges for money, and also operated in how willing judges were to bend to the wishes of the executive. Referring to the press conference by the four Supreme Court judges on January 12 this year, Jaising said the outcome of "a case does depend on who the presiding judge is, and there is need for transparency on this".

The chief justice of India – the master of the roster – decides what benches hear which cases. 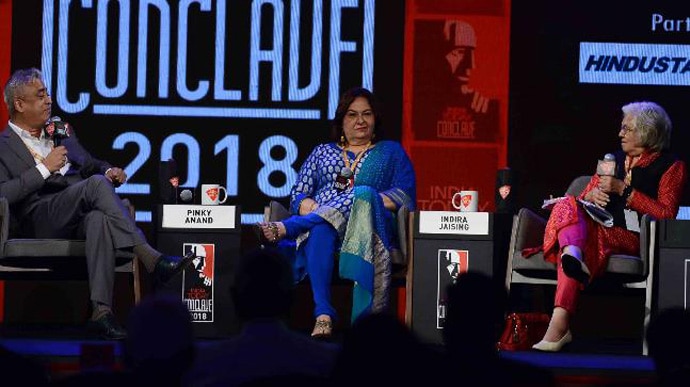 Anand, however, stated categorically that the Supreme Court was incorruptible. She said for any system to work, someone has to operate it, and that is why the CJI allots cases. However, she said, certain quarters protest when the allotment is found to be inconvenient. “We need to learn to stand behind institutions instead of looking behind the curtain all the time,” the ASG said.

Speaking on the high-profile judge Loya death case, around which a lot of questions have been raised, she said the judge’s family did not think his death was suspicious, and the court’s job was to view a case as per the law, and not according to its “sensitivity” or degree of politicisation.

Jaising said the way to politicise the judiciary was at the stage of appointment, where the government cherry-picks judges on the basis of their ideology. She gave the example of Uttarakhand chief justice KM Joseph’s elevation file, which she said the Centre was sitting on. “The Supreme Court is sitting on a volcano,” Jaising said, adding that the judiciary was in “janta ki adalat”.

She also urged the people to pay heed to what the four SC judges - justices J Chelameswar, Ranjan Gogoi, Madan B Lokur and Kurian Joseph - had said about the threat to India’s democracy during their press conference. “People wake up. These judges were not NGOs, they were not representing an ideology. Listen to what they said,” she said.

When pressed upon whether or not there were tensions between the executive and the judiciary, Anand said some friction was natural between the three pillars of governance. On the appointment of judges, she said it was the established practice for the executive to accept or reject the recommendations of the judges’ collegium, and it was well within its rights to do so.

On Jaising pointing out that the government could sit on judges’ files till they retired, Anand asserted: “No, the government is not interfering with the appointment of judges.”

On the question of judicial overreach and if the courts were getting involved in matters that were not their domain, Anand said the court gets involved in matters of social welfare, but stays away on policy matters such as demonetisation and population control, which are the government’s responsibility.

Jaising, on the other hand, said there was a problem of “judicial underreach”. “The demonetisation case fell into a black hole. The privacy case was not heard for the longest time. It was justice Chelmaswhar who got the matter listed, which led to the pronouncement of a landmark judgment. I think the privacy verdict is the third Constitution of India, after the one adopted in 1950 and the Kesavananda Bharati judgment.”

On being asked if the judges were often forced to play god - such as the ones who will have to rule in the Babri Masjid-Ram Janmabhoomi case - and if the courts should reject cases that drag them into political battles, Jaising said: “In the court, Harish Salve has said he represents Ram Lalla. In a lighter vein, if not judges, lawyers do seem to be playing God.”

Anand said matters of all sorts land at the court’s door because people have faith in the rule of law, and while the court cannot refuse political matters, judges have to keep to the law, and not let questions being raised on a case affect them.

She repeated: “At some point, we need to stop asking questions and let systems remain intact. These institutions provide recourse to those in need.”

Both Jaising and Anand agreed that the country needed more woman judges. While Jaising said she was critical of the government for not appointing more women as solicitors, the ASG wrapped up the session by saying that while she and Jaising held opposing views on many things, they were working together on several matters such as of victim compensation and honour killing.

Also read: Why there are no takers for Left's politics of irrelevance