Inky the Octopus' prison break reveals it's smarter than you think

While this Houdini act has caught worldwide attention, students of marine biology seem hardly surprised by the incident.

Everyone loves stories of prison breaks. But the stakes were much higher in New Zealand, where an octopus managed to pull off a Shawshank Redemption-esque escape from its tank at the National Aquarium of New Zealand in Napier and managed to find its way into a drainpipe leading all the way to the sea.

Inky - a common New Zealand octopus - made an ingenious run for freedom when the lid to his tank was left accidentally ajar during a maintenance operation. The wet escape trail that Inky left behind has led officials at the aquarium to believe he climbed out of his cell at night and slid up to four metres on the floor to make his way to the drainpipe. He then took a 50 metre long journey through the drainpipe to reach the sea at Hawke’s Bay on the east coast of New Zealand's North Island, according to reports.

Another theory involves Inky squeezing himself through an open pipe in his tank leading to the drain under the floor. Search by the aquarium staff in the drainpipes has so far produced nothing.

The escape required Inky - about the size of a rugby ball, according to Rob Yarell, national manager of the aquarium - to squeeze himself through a six inch opening in order to get inside the drainpipe that would lead to his escape. It has also been revealed that the escape happened three months ago but it is only being reported now, adding further to the intrigue of this almost classic prison escape story. 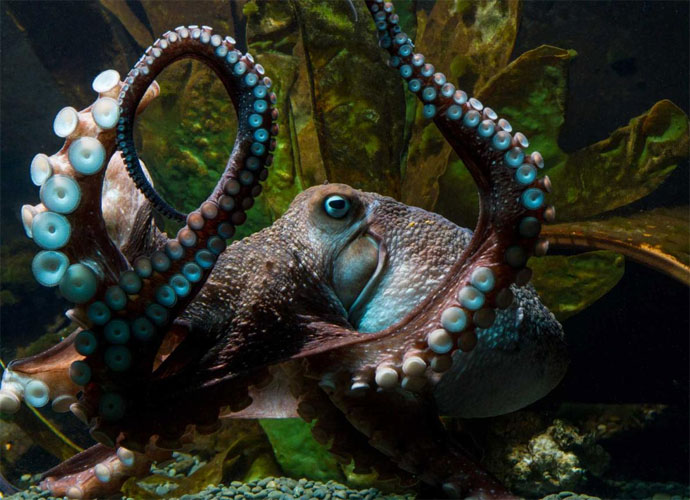 While this Houdini act has caught worldwide attention with reports appearing in The Guardian, The New York Times and The Telegraph, students of marine biology seem hardly surprised by the incident, for octopuses are known for their dexterity and intelligence.

James Wood, a marine biologist and webmaster of The Cephalopod Page, said, "none of this is surprising or atypical of octopus behaviour" and that "octopuses are amazing animals, they’re very intelligent" in his interview with National Geographic. The scientific community would agree.

Previously, octopuses have been known to escape their cells to eat inhabitants of nearby aquariums. At the Island Bay Marine Education Centre in Wellington, an octopus was known to escape its cell to steal crabs from the nearby aquarium and come back, while another set up a new world record by opening a jar before being released into the ocean.

Octopuses have also been filmed squeezing themselves through coin-sized holes since they have no bones, and scientific consensus states that they learn quickly, can form mental maps and have a known tendency to hunt and move around at night as Inky did.

Alix Harvey, an aquarist at the Marine Biological Association in England told The Guardian that octopuses' highly-evolved intelligence among cephalopods - and indeed all invertebrate life forms - was partly an evolution response to their habitation in complex environments such as coral reefs.

Even so, Yarell describes Inky as an "unusually intelligent" octopus. He also added that Inky was "very friendly, very inquisitive and a popular attraction here” at the Napier centre, where they have a smaller octopus named Blotchy as well.

However, Inky, in Yarell’s words, "had the personality" and was a "curious boy" as evidenced by his great escape. Reiss Jenkinson, exhibits keeper at the National Aquarium, was quoted as saying that she was absolutely certain Inky wasn’t "taken" or "stolen". So the credit for Inky's escape has been firmly credited with Inky himself.

The octopus’ escape has brought worldwide attention to the capabilities, complexities and intelligence of the octopus mind, and it is being hoped that this display will increase awareness regarding the conservation of the species going forward.

#Marine Life, #National Geographic, #Inky, #Animals
The views and opinions expressed in this article are those of the authors and do not necessarily reflect the official policy or position of DailyO.in or the India Today Group. The writers are solely responsible for any claims arising out of the contents of this article.