Is the Taimur doll the new ‘normal’ or the new ‘creepy’ in celeb worship?

In a country obsessed with figurines, this one, at least, costs far less

He stood there tall — all of 54 cms — chubby-cheeked, blue-eyed, revelling in his cuteness, enclosed in a transparent cylindrical coverage — the Taimur Ali Khan doll for everyone to marvel at.

Producer Ashwini Yardi tweeted a picture of the Taimur doll, on sale somewhere in Kerala, and Twitter exploded.

It takes someone only a short Google search to finally arrive on First Cry, an E-commerce portal, which sells the item, thereby making it available for people outside of Kerala.

Meanwhile at a toy store in Kerala... pic.twitter.com/J2Bl9UnPdT

Now, merchandise modelled after iconic characters are coveted in nerd-dom. I, for one, am obsessed with Game Of Thrones bobbleheads, and have been eyeing the King’s Hand lapel pin for months now. I have been through the Minions phase, the Batman phase, and at the risk of not being taken seriously anymore, the Krrish phase, too.

But the new Taimur doll in the market evokes a strange feeling in me. A scary one, at that.

What kind of obsession gives birth to a customer-base for a doll modelled after a two-year-old child?

And what should one call that obsession?

Of course Taimur is cute. One would have to be visually challenged to not see that. Yes, I want to cuddle him and pull his marshmallow cheeks. I want to feast my eyes on his pictures too. But, that I could own him at just 1400 bucks (Rs 980, after discount, if you order now) is a sentence I never thought I’d say. 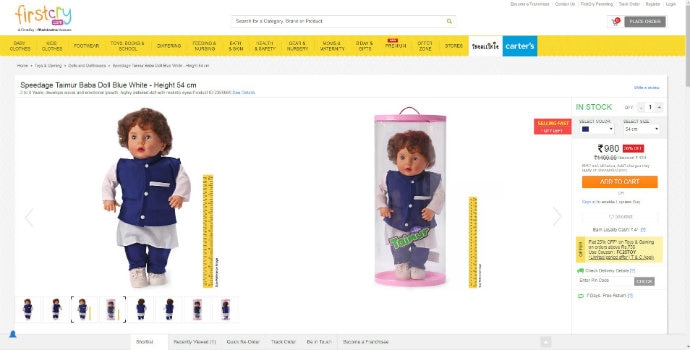 “All dolls pretty much look the same,” said someone at the office as we sat there ogling at the dozen doll varieties sold by the brand that makes the Taimur doll. It’s true. But this one has been dressed to the T (T stands for Taimur here) to look like the Nano Nawab — the white kurta-pyjama and the blue sleeveless Bandhgala leave little room for doubt. And if you’re still unconvinced, it’s got the branding all over.

Who does this doll cater to? Ideally, kids between the ages of 2-8, as First Cry will tell you.

But then, are kids of that age really so cued in on Bollywood news?

So basically, doting parents are buying their toddlers this Taimur figurine. It is one thing to appeal to a child’s vivid imagination with fictional tales of superheroes, Barbies (propagating incorrect and potentially dangerous body-image standards, but that’s the subject of another story) or even figurines of real-life icons.

But clearly, that’s not what this doll is doing here. Let's just call it a Taimur jacket instead! (Source: Instagram)

Let’s just say it like it is — it’s creepy to have a doll after a human baby of flesh and blood. A child walking about, waving to the paps and making a nation collectively aww-gasm at his smile. Heck, even a picture of Taimur goes at a higher rate, as we recently found out in Koffee With Karan. Not that I'm insinuating that a higher value would somehow make it okay.

Our obsession with film stars might have led us to build temples of them, but this is surely a new low. What’s next? Where do we draw the line? Or have we left the line so far behind that there’s no going back?

At least this doll costs far less than Rs 3,000 crores and is way cuter.

The only, and I repeat, the only good thing this abhorrant act of gimmicky money-making can do is perhaps settle the debate over whether it’s a Nehru jacket or a Modi jacket.

Since Taimur is rocking it ‘left,’ ‘right’ and ‘centre,’ the sleeveless Bandhgala demands to be renamed as the Taimur jacket.

Also read: If Taimur's pictures are up for sale, yes, I'm buying

#Bollywood star kids, #Kareena Kapoor Khan, #Saif Ali Khan, #Taimur doll
The views and opinions expressed in this article are those of the authors and do not necessarily reflect the official policy or position of DailyO.in or the India Today Group. The writers are solely responsible for any claims arising out of the contents of this article.