Every minister is an expert at his/her own field and it has 50 per cent women because 'it's 2015'.

The 43-year-old Canadian prime minister, Liberal party leader Justin Trudeau, is on a charm offensive not only with his drop dead gorgeous looks and really, really nimble dancing legs, but also with his absolutely stunning cabinet composition, which has been hailed as the most equal and diverse congregation of ministers in the world. The newly elected PM and his cabinet, which is 50 per cent female because hello "it's 2015", to quote Trudeau himself, are taking the media by storm by electing a cabinet in which every minister is not only a bona fide expert in his/her own area, but even includes a Nobel laureate! 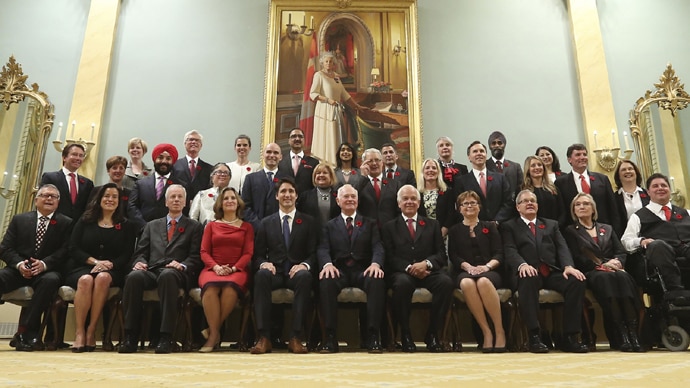 Hard to beat? We think so. Here are five reasons why Trudeau and team are doing a mind-blowing job by simply being themselves.

Easily, this is the most credible and to-the-point answer to the question why the Trudeau cabinet has 15 women minsters out of 30 in all. The Liberal prince charming, who by the way, hails from a family of political dynasts, showed remarkable flexibility and commitment while appointing his deputies, ensuring it passes the gender test in flying colours. "Canadians from all across this country sent a message that it is time for real change, and I am deeply honoured by the faith they have placed in my team and me," he said. Canadian ministers on their way to the swearing-in ceremony.

There are four Indian-origin ministers, and two of them are Sikh, including the "badass" defence minister, Harjit Sajjan. Apparently, Sajjan has won over hearts with spy war hero background (he's one of the best intelligence officers alive) and his mean combat gear photos going viral in social media. The other Sikh minister, Navdeep Bains, is a visiting a professor at the Ted Rogers School of Management at Ryerson University, Toronto. He is a biz-wiz and a finance geek, and is the minister of "innovation, science and economic development". Navdeep Bains is the minister of innovation, science and economic development.

As this viral image from Alana Phillips, a Liberal party member in Canada, rightly boasts, every one of the new cabinet ministers are not only top bananas in their respective departments, their very ministries are conceived and named to suit a 21st century reality: that of equality and diversity. Kirsty Duncan, the minister of science, is, in addition, a Nobel laureate in chemistry, just as the minister of environment and CLIMATE CHANGE, Catherine McKenna, is a trained human rights and social justice lawyer with huge green agenda. Kirsty Duncan has a Nobel Prize in chemistry.

They might have taken it too far by appointing an astronaut - Marc Garneau - as the minister of transport though. Now that's some extremely difficult standard to match, no?

4. Sensitive towards immigrants and refugees

A brilliant innovation in itself, the new Canadian government has formulated a ministry for immigration, citizenship and REFUGEES, headed by John McCallum, a distinguished economist and champion of social justice. Yes, that's not a hoax. John McCallum, the minister for immigration, citizenship and refugees.

Given the current global reality and in the wake of the unforeseen migrant crisis, most tragically exemplified by photo of little Aylan Kurdi's three-year-old body washed up on Turkish beach, we hope Canada's bold new inclusive approach to migration and refugee situation becomes a template to emulate for everyone, including Angela Merkel's Germany which has been claiming moral victory in the past few months.

5. Gay? Differently-abled? You're most welcome!

The Canadian cabinet has broken the glass-ceiling for many who may be openly gay, quadriplegic/wheelchair-bound, battling breast cancer, non-Christians, atheists, first-timers, non- native speakers of English/French, etc. In other words, the Trudeau cabinet is easily the most representative that Canada has ever seen, and according to its liberal commentariat, "looks like Canada really is". After a decade of the rightwing politics under former PM Stephen Harper, it seems Canada has once again got its multiethnic mojo back! India, are you listening?

Post your comment
#Canada Cabinet, #Justin Trudeau
The views and opinions expressed in this article are those of the authors and do not necessarily reflect the official policy or position of DailyO.in or the India Today Group. The writers are solely responsible for any claims arising out of the contents of this article.